©  Toni Lyons, 2016.  Unauthorized use and/or duplication of this material without express and written permission from this site’s author and/or owner is strictly prohibited. Excerpts and links may be used, provided that full and clear credit is given to Toni Lyons and “It’s a Waiting Game” with appropriate and specific direction to the original content. 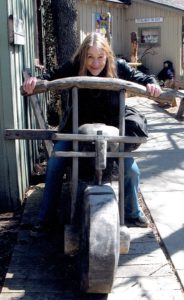 I’m Toni Lyons. I live in the very upper northwest corner of the US, fourteen miles from the Canadian border north of Bellingham.  I live with my partner Walter on a beautiful small farm. He has sustainably cultivated the land here for thirteen years. We eat very well and have made some small income from the produce along the way. (For the complete story on this project and much more, read “The Laws of Physics are on My Side” by Walter Haugen)

I have always been a writer and will always be a writer.  The difficulty has been that I have not always written.  I am now old — not really old, but certainly no longer at an age when I can afford to waste any time. I come from a line of what has been called late bloomers.  Even this is not really the correct term. We flower continuously throughout our life span but tend to have an exotic efflorescence when, by all societal accounts, we should be on the downslide.  This is now that time. Choosing my words carefully, I have held the belief that writing is the ultimate craft for as long as I have thought of these things.

My father was a writer. It is from him that my idea of writing as a craft derives. When I was about two or three years old, he decided to stay home and try to make his living by freelancing.  He was leaving a position as an editor for Random House, so was well aware of the challenges he faced in striking out on his own. He had a black Royal typewriter with keys outlined by cream circles and attached to great arching metal buttresses descending into the blackness of the internal mechanism.  His use of this machine was the basis of his craft. To this day I have the medal he won as a student of court reporting. It is for typing 112 words per minute on such a machine. Anyone who makes a living using a keyboard of any kind in this day and age will understand what a feat that was.

He bought me my own used Royal and set it up on a little table in the basement near him. Since my mother worked as a full-time teacher, he and I spent days together typing in the basement. With great concentration, I could occasionally push down hard enough on those resistant circles to make that satisfying clacking noise. These periods of concentration alternated with pedaling my red tricycle around the basement, enacting elaborate fantasies with my animal figures or napping on a blanket near my father’s feet.  I loved those times. Eventually, I was able to produce sheets of paper filled with marvelous lines of letters and numbers, mysterious markings of connection with my father’s world.

Later in my life, he made it clear to me that for him, writing was in the greatest part a craft. It required perseverance, endless disregard of the cries of despair from one’s ego and mostly, grinding effort. His words of advice for the young writers who sought him out were always “Apply the seat of your pants to the seat of your chair. Write ten pages a day, even if it’s crap. Throw it out and keep going.” From that time on, I knew that both the hardest thing to do and the most  desirable was to sit down and struggle to bring some up some wisdom, some essential communication from the bottom of the deepest well. One could compose music in this way, paint in this way, create buildings in this way or get it down in those black marks on paper.  This last was the hardest since the farthest removed, by the transaction of symbols, from the essence itself. Since it was the hardest, I felt sure it was then the ultimate and the thing to be pursued.  When I was moved by things in nature, I came up with words for it in my head, puzzled by something, the right words were the key.  I listen to conversation all around me, always with the curiosity of one who will transform this information in to the voices of characters and their imagined lives into stories. Since my mother was an English teacher, I was schooled early in the fact that words had precise meanings and worked together in precise ways and that all kinds of related words conveyed slightly different, and wonderfully evocative, meanings. These were the tools. I never thought I was really up to the task.  At age eighteen, after talking with the woman in the seat next to me for several hours on the flight back from France, she said, “If you close your mouth and put your stories on the page instead, you will be a wonderful writer.”

Meanwhile, I grew up, along the way wanting to be a large animal veterinarian, then a college teacher and researcher, finally settling on a profession in clinical social work. That is now done after thirty-five years. During that time, I became an intimate in the lives of all kinds of astonishing people I would never have otherwise known. I married as a college student, had two children, left the marriage after fifteen years and raised the kids for some years without a partner. Then I met the man who quickly became the complex love-of-my-life and the most demanding relationship I’m ever likely to know. Now with grown children and a granddaughter, Walter and I are selling our farm and moving to France.  We, as are most of the world, are in a waiting game. What is unfolding? This is what I will write about, in many ways, both oblique and direct. Follow along.  There are fewer times for me to tell my stories in conversation these days. Perhaps they will flow onto the page. You may find something in them.

We made it to France nearly three years ago and live in a village in the Ariege, in the foothills of the Pyrannees. Walter has created another huge garden and continues to research how to perfect techniques that could keep people eating through the coming years of climate change. We depend on what we grow for a good deal of our nutrition but we are definitely lucky to live in a place where many people still farm and sell in plentiful weekly outdoor markets. We eat beautiful cheeses and bread from the local boulangerie. And, yes, we drink wine from Bordeaux and the Languedoc!  We have wonderful friends and neighbors and have settled in nicely.  There is always change and movement. We feel very fortunate to have landed where we are. We are still getting up every day and doing something positive, and then another thing and another. That is what we’re doing between the coming in and the going out.