Before Christmas last year, a shirt appeared one day, hung from the neighbor farmer’s wire fence bordering the road. Across the front of the shirt, the name of one of the big French telephone companies was written in white across the dark blue background. I noticed it one day on my afternoon walk. I remembered seeing a white truck parked nearby the day before. I thought I’d wait and see if the owner came to claim it.

Another week went by and then another. In the French manner, no one wanted to take it since it wasn’t polite, and at any rate, no one else could really wear it. And then came the news that a novel virus that had begun in China had spread to the US and then to Europe. It got a name.

Then it seemed no one wanted to touch the shirt to put it in the trash since it might, somehow, be contaminated. Everything around us that other humans could possibly have touched might carry this microscopic, mysterious thing we had come to fear. No one wanted to touch trash dropped on the street even after several days had passed and the virus could not have survived. Each time I passed the shirt it would tempt me, my reason saying it could no longer be infected. Part whim, part perversity, I decided finally to leave it there, caught on the sharp wires, and see what would happen over time. It became a kind of marker, my little science experiment into the nature of the interaction between the decomposition of man-made matter and the surrounding culture.

Since, we have come through two years of being ruled and then ignominiously nosed around by the evolution of this new virus. It is made, like many of its cousins, of only a single strand of RNA that can attach itself to the RNA of an animal’s cells. This thing–not really independently alive since it cannot, by itself, reproduce–finds ways to live by using the strings of RNA or DNA of other cells. It then can cross the threshold between living and non-living carbon-based matter by being able to reproduce itself. Once it invades a cell, the very process of replicating itself damages the cell. These thousands and thousands of tiny injuries are what make us feel ill. Depending on where they have evolved to thrive, these foreign RNA strands can invade organs like the lungs and wreak havoc with the way our body functions.

There have been thousands and thousands of these waves of viral evolution that have gripped populations of humans, particularly since we brought animals close to us to raise and eat. We have helped them find their way to us by relentlessly destroying forest habitats and wetland habitats, where, in our absence, they had adapted to the organisms they had found there. And we, a species now so globally connected that we can talk to people around the world and bind them to us with our love, we, who are so adept at utilizing resources, cannot muster the same level of cooperation and organization displayed by a horde of things only potentially alive.

In the face of the wave of this new virus, there has been a chaos of reactivity. Economies have all but come to a halt, endangering more lives over the long term than even the virus will be able to. Over the course of the last two years in the US, doctors have become public health officials rather than care providers. If you call a doctor to tell them you’re sick (if you’re lucky enough to be able to talk to one) she will likely direct you to whatever protocol is in development at the moment for following rules– rules for testing, reporting and quarantine. She will make it clear she doesn’t have the time to help you with your symptoms. They are unimportant. Her job is to try to keep what you have from spreading.

Then, you’re on your own to find an appointment for a test. In many places in the US at this moment, you’ll really have to scramble to find one, even while you’re so sick you can barely open your eyes. And the US is so much better than more than half of the rest of the world.

In most of our “developed” and wealthy cultures around the globe, parents have been forced to take on more and more of the responsibilities that were shared by other members of their culture. The education of children, the care of young children during the day, even the provision of basic, non-urgent medical care have all been given back to the parent. Parents already stressed by the pressures of a modern competitive society, many on the verge of real break-down before all this, have been forced to add so much more to their load. And then we have forgotten them or even given them the direct message that, for Heaven’s sake, just cope, why don’t you! Do you think you’re special? You’re responsible for your choice to have children. Do you expect your society to share that responsibility?

While many in the privileged world turn down the vaccine for their own considered reasons, over half of the world’s less privileged population is unable to access even the first vaccination. Only a little under fourteen percent of the population of the continent of Africa, for instance, has received at least one dose. Today, I read that a team in the US has developed a vaccine based on older, cheaper vaccine methodology. It simply uses a partially inactivated form of the virus which gets the body to trigger the immune system to fight off that particular piece of RNA. It is already being used and produced in India and will spread rapidly since the technology is not proprietary. It is not quite as effective or adaptable to new viruses, but it will considerably slow the advance of the Alpha and Delta variants. The wind changes because the ice melts and the ice melts because the climate warms. One thing bumping up against another. A shirt forgotten on the fence. People walking by, thinking about it or not thinking.

The shirt eventually turned to a shredded, unidentifiable piece of material, mostly white with a tinge of blue. One garbage day, it was gone, presumably put into the trash by a neighbor who finally felt safe to handle it. Meanwhile, the virus too has been changing. It does not decompose like a shirt made by humans. Instead it evolves. Both occur through random chance. The shirt was subject to the chance of changing weather and human decision-making. Exposed to the same randomness, the nature of the virus shifts in the direction of those changes that allow it to reproduce more copies of that change, more copies of itself. An almost imperceptible change occurs through random mutation and allows more of those tiny individuals to survive. That imperceptible change produces changes in the environment they occupy and on we go.

As humans, we are capable of creating changes in the culture around us. In the ‘60s and ‘70s many of the young people like me looked around and said, “The direction my culture taught me to take is not good. Killing people on the other side of the globe for ridiculously vague reasons (or for matters of greed) is insane. Continuing to make the planet we depend on uninhabitable is not a good path. Being intolerant of others of our species because they have a different color, a different belief, or are not attracted to the opposite sex is not useful. Continuing to overpopulate our home will destroy us. Building nuclear plants whose potential risks far outweigh their benefit to our comfort is stupid.”   We changed the culture around us. We infected things with our love. We changed what was sexy. We consciously changed the human qualities that appealed to our desire to procreate.

This culture, so vibrant and positive, was pushed down and pushed aside by the dominant and powerful ,but its DNA persists in the population. There are variants here and there. Like a virus, these shifts in culture never really go away–they just become endemic. This little attitudinal virus with which I was infected as a sixteen-year old has developed and adapted and is still infecting all the susceptible individuals it encounters on its journey. Now it can reach farther than ever, around the globe, here in France and back to the US, outwards through the internet.

We’re a species rather superb at creating what we can use our big brains to imagine. We’re rather superb at using resources to shape our environment. There is a randomness in the universe that allows for change. Just as the DNA and RNA of all organisms allows for organisms to increase their reproductivity in the soup of randomness, the randomness of it all allows for new opportunities at every moment. We often think, as we try to survive from one day to the next, that there are only one or two choices open to us. There are an infinity of possibilities, each choice opening another avenue of infinity. When something looks like a positive direction, we can feed it, we can make it grow. We can make it expand under the attention of our love. It is clear from where I stand at the age of seventy that this opportunity we have–of living a life here on this planet– is like the water flowing in the river at the bottom of our land. It flows towards the vast ocean, persisting even when reduced to a trickle, carrying with it the impressions it encounters along the way, purified from time to time by the rush of clear water from the mountains and the torrents from the skies. 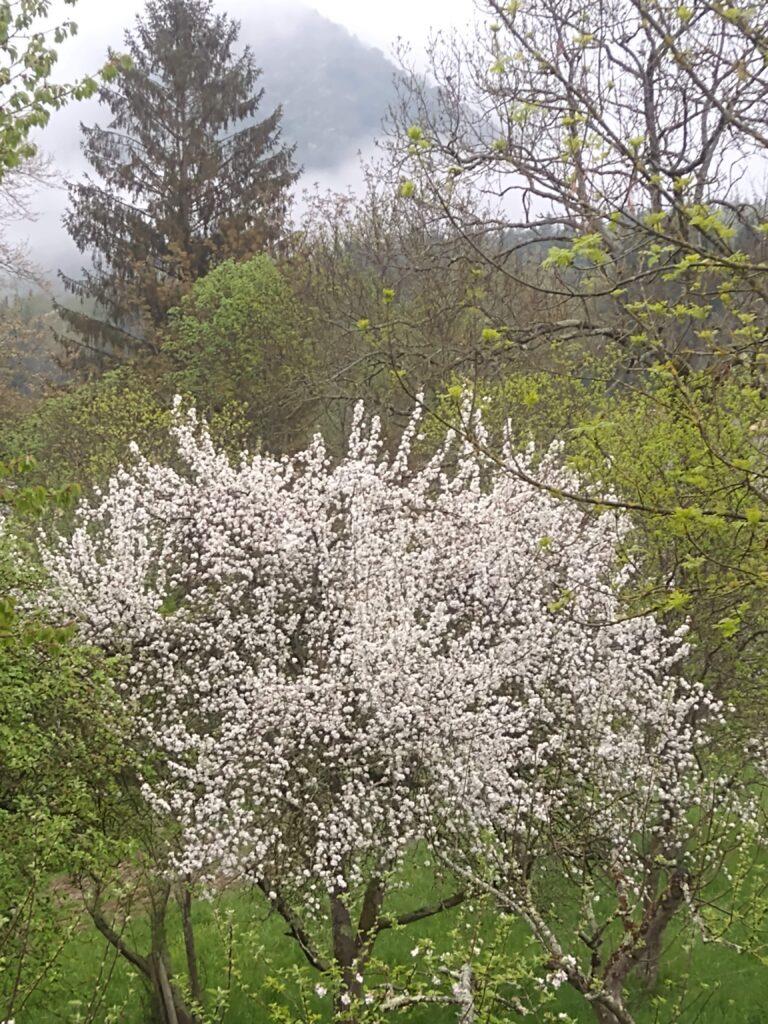 I cried today
For beauties lost, small moments passed
Sifting through as if an hourglass
Each grain shining as the force of time
Pulls along without a sign
That it too will fall from view
To be caught in well-springs deep within
Where it will glitter briefly
When light slants through, bright and true
And pulls tears of joy and loss
From a heart full since broken
More than twice

My daughter stands by some device
In front of rows of chairs and wooden stage
Violin to chin, making music sing
At some young age,
Such sweetness danced behind my eyes
That tears welled up and I wept
For such a moment deeply kept
Somewhere hidden within a cell
Where only dreams are said to dwell.

And then the moment when,
Having watched and run and breathed
With such abandon on the grass
The ball at last with one swift pass
Arrived just where he’d known it should
My blond young son had kicked it straight
With a slight lithe leap, it flew so neat
And so direct to find
The middle of that net.
Bouncing back, we clapped so hard and cheered
My heart so filled with beauty it was seared
Forever, soaked with love within my mind.

And now, in this moment where I sit
I hear the liquid strains of violin
Coming from a box within
this box that seems to move me right along
Driving past woods themselves alive with song
Blossoms drip from apple trees
Where savage flowers in random beauty grow
Below, so many forms I’ll never know

The liquid that has touched my cheeks
Is that which makes all essence flow
Amidst this green that spring makes grow
I drown in some sweet sorrow
We’ll call love.