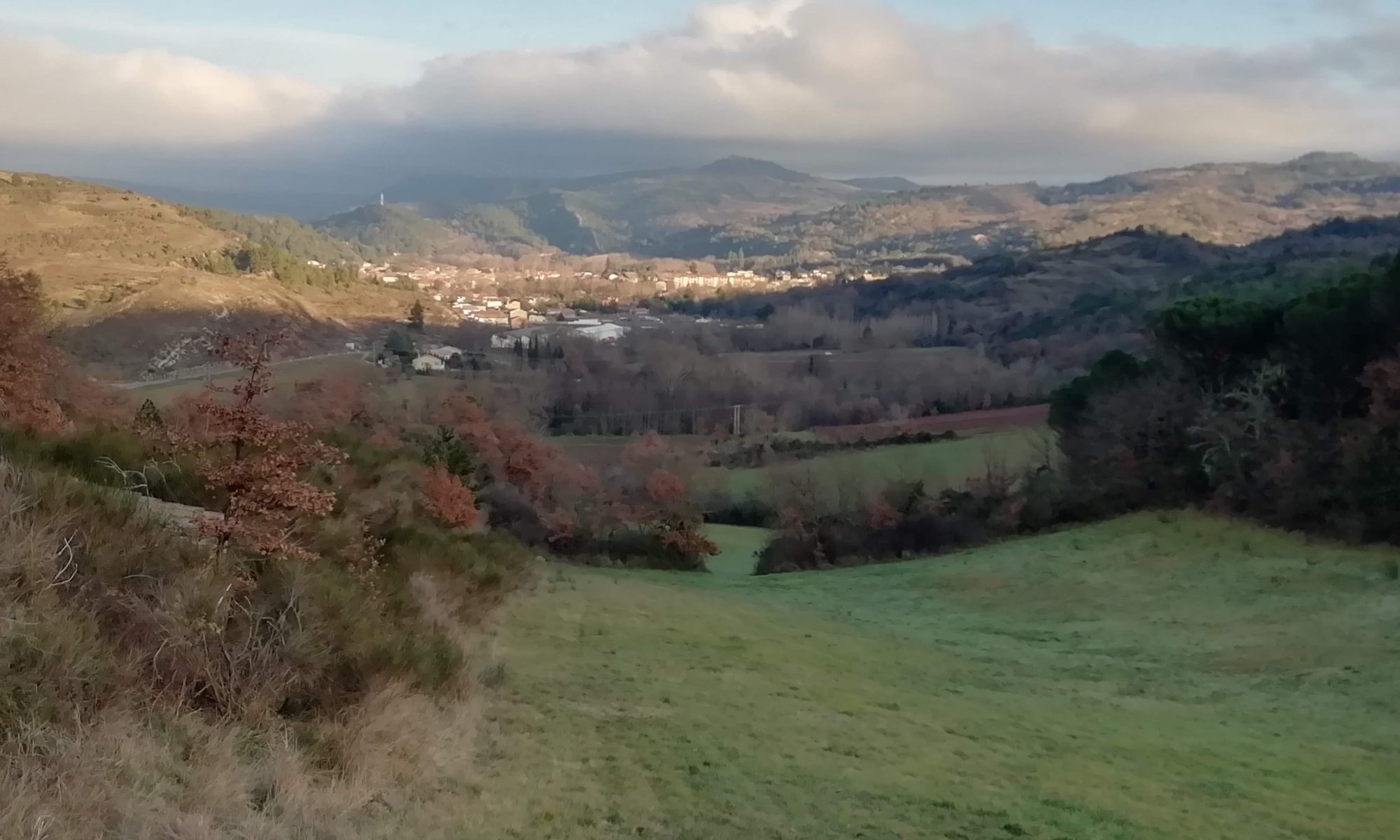 It’s clear we are all experiencing the same waves. We are in the same ocean.

For several days after we arrived, the afternoons were warm and even sunny. We sat in an outdoor cafe in the village of St. Jean de Verge one late afternoon sipping Kronenbourg beers, watching local people at the other tables chatting and relaxing at the end of their workday. The little square was decorated with white lights in the shapes of swans and Sapins de Noël ready to spring to life after dark. The Gilets Jaunes were on the roundabouts in the bigger towns, stopping traffic periodically, gathering around bonfires made from stacks of recycled pallets. The burning bonfires, the destruction in Paris make visible the burning resentment of those who have little towards those who hoard the wealth at the top–so ironically modern while so ancient just as is the xenophobia manipulated by synical leaders. It was a relief to be out of the stress and noise of the US. Even the political chaos of Brexit and the rampages of the Gilets Jaunes seem calm.

Now here we are, back in Fa, the village that came to feel a bit like home this past summer, at the rambling old house of our British friend, with the tower of FA in its backyard, its tiled patio still catching the afternoon sun, its warmth now brief.

Today in the misty rain I hiked up into the hills behind the village where the ruins of the ancient village of Fa once spread itself around a protecting little castle. My last hike up the same hill was in humid 32 C degree heat, dressed in a flowered sundress and straw hat I’d bought at the Sunday market. Now I wore the same woollens and Gortex jacket I’d worn on my endless walks over the Yorkshire Dales in the chilly rains of August. The landscape, in fact, felt much the same, the rolling hills, the views over extended valleys, the dry stone walls, the muddy tracks, the puddles of water, the steady light rain, even the gusts of wind on top of the pass above the old tower.

We’re back in France to face all the practicalities of starting a home in a new culture, with new rules, new ways of approaching the tasks of life. Because we’ll be living in a rural area in a small village without public transport to speak of, we’ll have to buy a car, deal with car insurance and then, eventually, with the whole loathsome process of getting a French drivers license. We have to figure out the best places to buy all our household goods like mattresses, stoves, refrigerators, pots and pans, dishes, linens and on and on. There are great second-hand markets and decent online marketplaces. There are networks of friends to ask. And there’s life to live. Endless walks to take. Castles and caves to see. Other areas of France to visit. A rhythm to settle. A new way of life that contains selves that are at once fluid and contained, familiar and new.

Today, I saw two things that particularly mixed the soup of self the way only a jolt of joy can do. This time it was two things that link together strangely, both revelations of the quirky imagination that lurks everywhere, in all ages of humankind, in all places we live and move. The first was such a simple thing. It had such brilliant elegance in its practical ingenuity. I watched as a friend from Australia casually put the heel of his “gumboot” in the rounded slot carved out at one end of a short painted board. He put the toe of his other foot on the bottom end of the levered board and pressed. His boot with the trapped heel came off nicely. He pulled his foot gracefully out of the boot, stuck the other boot heel in the slot, pushing down on the clean part of the bottom of the board with his stocking foot. Pop! Off came the other heel, easy as can be. And I, having lived in the rain and mud of several parts of the US had struggled for years to pull off my muddy, clunky rubber boots, using the outer edge of the door jamb or resorting to a friend to help. Here it was, so easily solved.

Then, walking up the hill past the village cemetery where only long-time residents of Fa may be buried, I happened on a small piece of land nestled into the side of a hill. First I saw the wooden shack with tarps of various colors for a roof and salvaged window panes stuck in here and there on one end of the small holding. Then the small camping caravan appeared (what we call a trailer in the States) and then I saw the new construction. A large pair of beautiful wooden gates, clearly newly made, each more than 15 feet tall, stood at the entrance to the land as if to keep people from trespassing up the drive of an elegant country estate. The beginnings of a beautiful wooden cupola could be seen at the back of what might be the beginnings of a landscaped island of garden. In the chill of the late afternoon, the whole thing looked empty of life.

If you live in the same place for a long time, the relationship to what we know as our “self” becomes more rigid and fixed. We think of our self in relation to all that comprises a life. With seismic shifts come the chance to experience the huge reality of self—the reality of self before it has the chance to pretend it actually is what its surroundings urge it to be—to experience the huge reality of the interior before it gets the idea of a new form, new edges. That self is now naive—it has yet no fixed belief about what it is, what it sees, what it hears, what it smells, what emotions turn up. It exists without the heavy anchor of habit for some brief wafting moment. In the process of being seduced, the self is more like someone in the bloom of love, open, infinite.