I had decided to go see my son in Bloomington, Indiana just before his thirtieth birthday. There I was, waiting for two hours at the airport for the flight to Chicago. In the large airport hall in Seattle people were seated in almost every seat, waiting for flights all over the country.

As I settled in to a seat comfortably spaced between groups of travelers, I began to notice a loud, sharp barking sound from the corner of the huge space. A small dog, I thought, caged and panicked. “How could someone inflict that on a dog?” I thought, and buried, in that place where self is stored, “Why would they inflict that on a crowd of people?”

It repeated, over and over, becoming an annoying random break in consciousness.  The most remarkable thing was that no one else in the large space appeared to notice. No heads turned, no one turned towards a companion to remark. Perhaps there were one or two furtive glances in the direction of the sound that were quickly modified, as if they had really intended to look at the planes taking off or at the reservation desk.

As it continued and no one else seemed bothered, I began to question my interpretation. Under cover of walking to the restroom, I turned to look in the direction of the sound. In the corner where the sound seemed to originate I could see nothing but a woman and maybe a child or two. No sign of a cage or a dog on someone’s lap.

The barking continued intermittently when I’d returned to my seat to continue my wait. As I sat, looking out at the sky through the endless windows, it began to dawn on me that it must be a person making these sounds. As my interpretation shifted, the sounds seemed more and more like human utterances, though wildly sharp and piercing.  A child with a severe case of Tourette’s? A person with autism?  The lack of response from the waiting crowd was now a gesture of compassion, of empathy or perhaps of embarrassment mixed with a desire to avoid the shame of being the first to acknowledge. Maybe the cries are becoming fraught with the anxiety of being in this strange, stressful place. Perhaps it’s an expression of what we all feel. Perhaps as this person settles into some acceptance of the difficulty, as we all have had to do, the yelping will begin to subside.  One of the cries takes on more shape. “Aiy! Aiy! Fuck you! Fuck you!”  No one turns towards the sound.  I look at the weather in Bloomington on my Smart Phone and think “Who is this human? What is the story?” not asking, not acknowledging, experiencing the collective mind of all those gathered in this waiting space.

Later, as we fly, the clouds below are a continuous floor of cotton, like the rolls that come in a box.  An occasional rent in the fabric reveals, almost equally white, mountains and then squares of fields. These places are receiving the sun. The unseen are not. 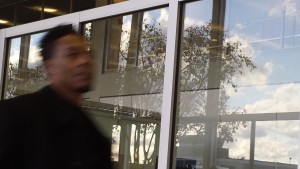