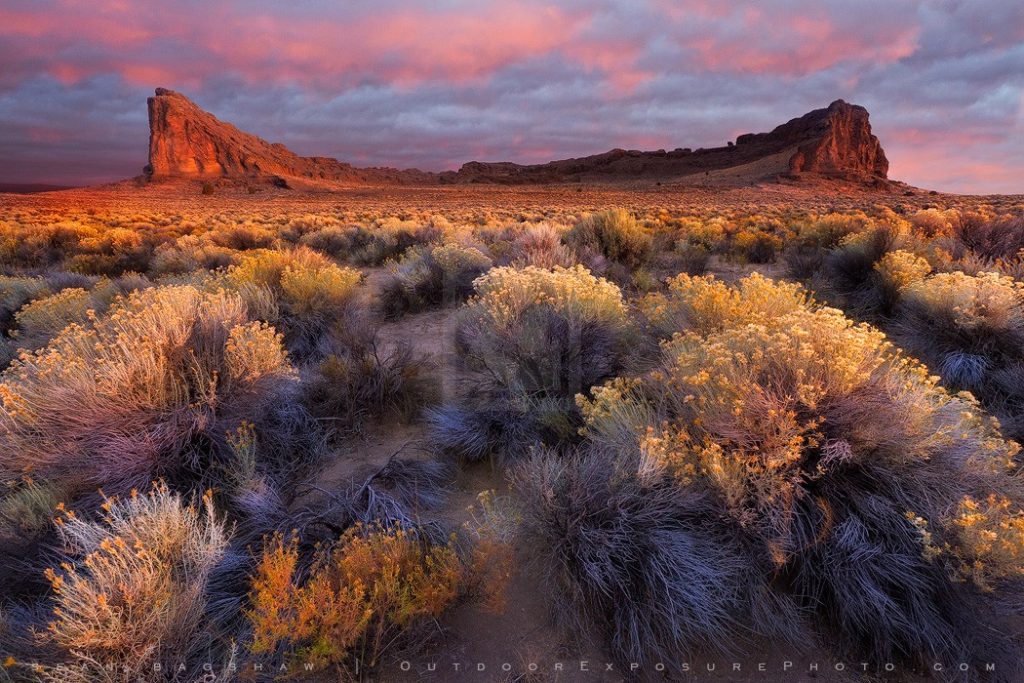 It was mid-September and the mornings were getting cold. The night before, I had laid out my clothes with a warm jacket, a wool blanket, wool hat and gloves and then slept soundly.

I was on a road trip on my own, a kind of pilgrimage. This morning I was going to the place that had called me back, a place on the high desert. I wanted to get there right at sunrise.

I left the house where I was staying very quietly, making sure to close the screen door carefully. The air in the dark pines was sharp with cold, the night turning to pre-dawn grey.

As I drove through the scruffy, sagebrush desert, light began to seep gently over the horizon. The road went on and on through a seemingly boundless expanse. The sun was staining the bottom of the sky warm orange and beginning to reveal the cloudless blue above as the huge rock formation came into view ahead.

The formation itself, now glowing orange and brown in the warmth of the rising sun, is the remainder of an ancient volcanic crater, looming up from the flat desert floor in a huge jagged semi-circle, one side open to the plains that stretch endlessly on all sides. I felt a warm flow of joy as I came closer and closer.

I parked in the dirt  lotand pulled on my warm clothing, locked the car and stood for a few long minutes looking up into the huge rounded enclosure, the rock walls looming high above me on both sides, orange and sandy brown in the morning light. I set off for the rocks under the steeper eastern wall. The air was still cool enough to make me thankful for the warm wool blanket I carried with the water in my pack.

These rocks of volcanic tuff had sheltered humans for at least thirteen thousand years, back when it was an island in a huge receding lake. They lived and hunted and fished all around the walls of rock. Their presence emanates from every shelter in the jutting rock, every waft of air, every clump of brown grass and sage. I felt it in the path still used now by tourists. I was all alone in their presence and would be for a few hours.

From below, I selected a spot among the huge rocks and vegetation near the wall’s protective interior face. A prairie mouse scuttered from the hiding place of one rock to another. A litter of small bits of tuff covered much of the ground where short brown grasses pushed up here and there. It was a place fairly sheltered from view from below and from the rays of the rising sun promising to gradually heat the air. It would have a commanding view of what had once been Lake Mazama, left by the receding glacier.

I climbed up and moved from spot to spot until I found one that had just the right view and was comfortable enough to sit for the hours until I would no longer be alone. Wrapping my blanket around my legs and feet, pulling my hat down over my ears, buttoning up my coat and putting on my wool gloves I began my sitting.

I greedily breathed in air permeated by expansive silence. No sound of human activity, no calls of birds, no movement of air. Stillness. The rock walls enclosed the whole space around my back and sides, looming upwards, earth jutting up towards sky. Gradually I felt each cell drawing in the solid brownness of it, the smooth greyness, absorbing the particles of earth and lava that had been compressed by huge forces over aeons. I settled into the earth, encompassed by its strength.

Before me spread the plain, the sun still tinging east-facing rock with orange as it rose gently higher. Humans had lived with this expanse for millennia. When early human lived here, it had been an enormity of water, stretching to the horizon. They had woken each morning with the presence of this rock, rubbed their eyes, stretched, yawned and begun their day, their eyes taking in all this beauty. We have all felt it the same way. We absorb the immensity. We reflect it in our eyes, our hearts. It stretches out within us and settles, as I had settled.

Sparrows came and scratched near my feet in the sandy dirt and dry grasses for moments, looking for seeds, heads cocking this way and that, ever alert, skitting off quickly. A big hawk flew out over the plain, rested in the air and then circled slowly back to a perch on the cliff above me where he stayed, watching. Everything returned to stillness. My mind became completely still yet full with the substance of earth.

The light changed so slowly that even change seemed stillness. The sun’s warmth gradually spread through the roundness of the opposite side of the crater while I continued to be hidden in shade. I felt the warmth in small currents of air begin to reach into the shadow.

Within the world of the enclosing walls, one by one, two by two, individual rocks took on shape, color and character. The colors of their solidity shifted from greys to warm browns and reds. They cast long shadows as the sun rose gradually higher, their dark spread the only movement. At the far edges of the crater, the rocks were already losing the depth of their deep colors to the bleaching light of the sun, losing their earth and becoming ether. But the huge walls retained their strength, their earth, even as the reds and browns began to disappear.

I sat as it all shifted slowly, slowly through me. I shed the blanket, the gloves and the hat and opened my coat. Other small birds flew among the rocks, chirping, warbling brief snatches. A prairie falcon swooped, calling its wild call, speaking to me, and flew out over the plain. Always the expanse, the weight and strength of enormous rock. Earth. Stillness. My body settled further as if enveloped by earth.

It was only after the sun was halfway up the sky that I heard the distant sound of a car. I watched as it drove along the road leading to the crater where I sat hidden, the warmth of the day having now penetrated further into the circle, light now where I had been in shadow. With slow deliberation, I put my warm clothes into my pack, drank some water and gathered myself to stand. As the car came to a stop down below at the entrance to the crater, an older couple emerged, looking up and around them, getting ready to ascend along the trails into the encircling cliffs.

I threaded my arms through the straps of my pack as I began climbing around the big rocks there half-way up the wall, picking my way, unnoticed, to the back of the crater. I had the whole day to explore the trails through the sagebrush and the rock formations that covered the expanse of the ancient crater. Each formation of red and brown tuff had its own qualities of earth. I wanted to pull it all in as I walked and breathed.

One by one and in small groups, more people gradually came to walk the trails. We spoke to each other briefly, always about the rock, about the awe. It was reflected everywhere.

When I had explored every nook and cranny as I would the body of a beloved, breathing in the various fragrances rocks, dust, dirt and sage, climbing up the trails to the top of the outer tip of one edge of one wall where it opens out over the prairie, viewing the infinity from the opening in every way, I finally left the intimacy of the grand but still enclosed space and walked out along the outside of the crater. I seemed to breathe a newer air there than that inside the walls. I craned my neck and looked up at the great height of the rock cliffs. There I sat and ate my late lunch under the sparse shade of a juniper tree.

After I had eaten, I walked the sandy trails back to the center of the crater and sat on a rock to absorb the entirety once more before I left.

I remained there on that rock until the sun was once again more than halfway down towards the horizon and the heat its most intense. Again, it was again perfectly quiet in the bleaching light. The last of the people had driven away. I sat until I couldn’t sit anymore. I took my time walking back to the car, absorbing each prospect as I went.

After I’d let the heat of the oven inside the car dissipate, I drove out along the arching road away from the crater, past the settlers’ cemetery, turning my head or looking in the mirror again and again as the sun, descending towards the horizon, began to touch the colossal volcanic walls with warming browns and red. I stopped the car and got out to see this unimaginably immense sanctuary of rock once more, small now in perspective.

The intimacy of being in its midst, the stillness, remained, even as it appeared to dissolve from earth to ether there in the gathering darkness in the distance.