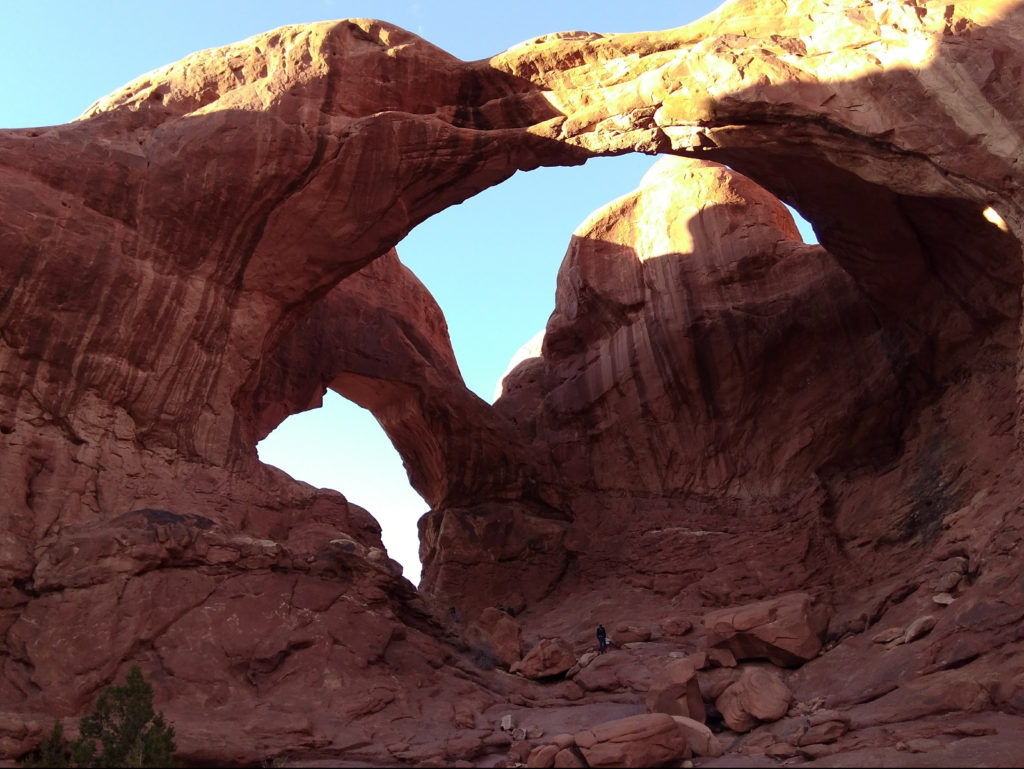 We climbed towards the enormous red sandstone arches feeling the blood of our bodies pulsing in the warm light of late afternoon, the cold air pushing and pulling with its rushes of strength, the blackbrush and sage shrubs leaning this way then that in the gusts.

Feeling the weight of my feet, dragged more by the force of gravity than I remember, grateful to reach the platform of rock under the unimaginable grace of rock arching over, I stopped to watch some children running up and down the sloping red rock above me.

A young father, slim and bearded, sat at the top of the slope beside the opening of the arch, an arm around his young daughter, who, not much more than two, plump legged, yellow-haired, pacifier dangling on a cord from her neck, rested only for a few moments in the ease of his protection. She watched her sister for a while with great attention, a lithe girl of six or seven, barefoot, long blond hair tossing behind her, running up and down the steep rock slope, chasing her two also barefooted younger brothers who then turned and chased her, up the slope, down the slope, full of the bursting energy of the first bloom of youth. The littlest girl then quickly squirmed out from the arch of her father’s arm, turning backwards, finding footholds to climb down the rock. The father climbed down next to her, arms relaxed, attentive but calm.

Further down, near me, the mother called to her littlest boy to see if he was ready to come down with her. He shook his head vigorously, no, ducking into a small rock crevice and out the other side, swooping up the jagged rocks again after his brother. The mother called up to her husband, “I’m going down. I’m a bit tired.” He called back acknowledgement as he walked, hand in hand, with his tiny daughter, across the top of the slope beneath the grand arch.

As I climbed up further, I watched as the young man showed the tiny girl where to put her feet on the rock wall leading up to the opening of the arch. He helped her kick off her boots so her feet could more easily find the places where rock would hold them. She climbed easily, finding footholds, her father beside her on the rock, not too close, letting her feel her balance outside the sphere of his protection.

An older man was beginning his descent from the opening of the arch where he had been sitting. I had seen him there from the back, sitting still for a long interlude, absorbed by the wide view beyond.  Now the man was awkward and hesitant, a counterpoint to the tiny blond girl, uncertain where to put a foot, how to find a firm way down. Leaving the baby on the wall for a moment, the young man moved over to help guide the older man’s faltering feet on the rock. The little girl continued her climb on her own, close in to the rock, easily finding the next place to put a foot. Her father, relaxed, returned to climb up next to her.

The two finished their climb, side by side, reaching, at last, the rock platform stretching under the arch. He held her hand lightly as she climbed up to the narrow shelf whose delicate breadth I could not judge adequately from below. He sat down beside her, an arm draped loosely around her once again. I watched as her small blond head relaxed against his side. They sat that way for some time, the father pointing from time to time at some feature in a distance certainly full of the glowing light of the coming evening.

The older man, humble in his anxiety, made his way down to the more level ground, grateful to have safely found a way.  Soon, the father and daughter made their way back down,  he coming first, reaching up and holding the tiny girl gently around her waist as she found her first footing, then descending alongside. The older children had not yet slowed in their running, climbing, hiding and chasing, the mother calling for them to start their way back.

As we all started down the path as the early sun was already beginning to make its orange way down to the horizon, I turned to the mother.

“We’ve been admiring how nimble your children are. I wish l was so agile.”

She said “Oh god yes! Me too. I have to just let them go. I can’t hold them back–they have so much energy to burn.”

As I walked down behind the group, children running ahead, barefoot still on the cold rocks, I thought about my own children and now grandchildren.  My fear of the harm that might come to them in the immediate moment, has it prevented them from learning things that will keep them from the real dangers of being a human alive in these times?  Did the culture that surrounded me shape my teaching to prepare them for a world that is fast changing into something more dangerous, more challenging?

In that magnificent rocky land where people have lived for millennia, finding water and growing and hunting food where there seems to be none, surviving amidst the beauty, it is easy to become absorbed in imagining the lives of these ancient relations. Over the years and years that we live in parallel tracks in time as children and parents, as overlapping generations, as beings becoming ancestors, we go back and forth in this balancing, finding the edge between survival and annihilation where the skills to survive are born.

My children grew up in a time when some of us had begun to see the limits to the comforts of our culture.  But they and their children are still embedded in a culture that seems to see only some endless present of limitless energy, of technological fixes.   It will be up to them to find the skills to survive without the comfort and protection all this excess of energy has provided. It will be up to them to find the footholds in a new terrain.  I hope the love of those of us rapidly becoming ancestors has guided them well enough. I hope they can draw on its nourishment as they climb away, over the rocky ridge, out of our site.