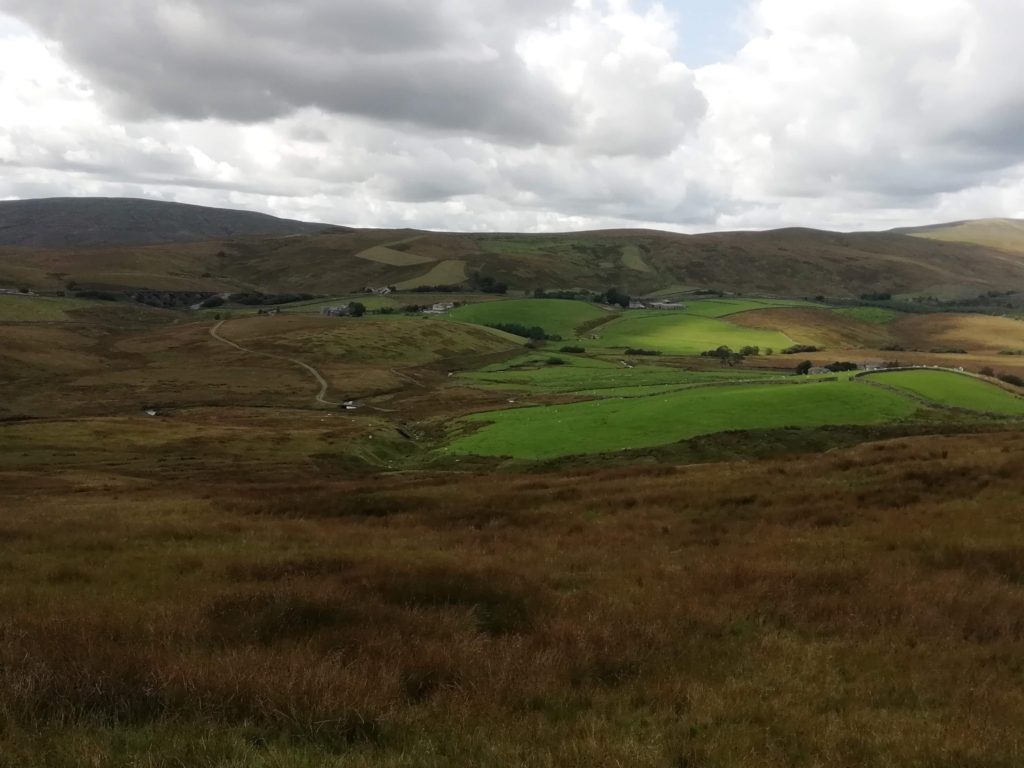 Up to the top of the fells again today, this time with a pack and a little lunch. I’ve walked about eight miles a day the last few days, with slight variations in my route. Today it was down the A684 road past the renovated stone house, past the little Methodist Church build in 1878 for the railway workers, past the Moorcock Pub, through the gate to the Pennine Bridle Way, through the sheep fields, over the stone bridge across the infant river Eden and up the hills past the cleft in the hill with a stream and a waterfall and up to the big old ruined lime kiln at the base of a limestone outcropping. 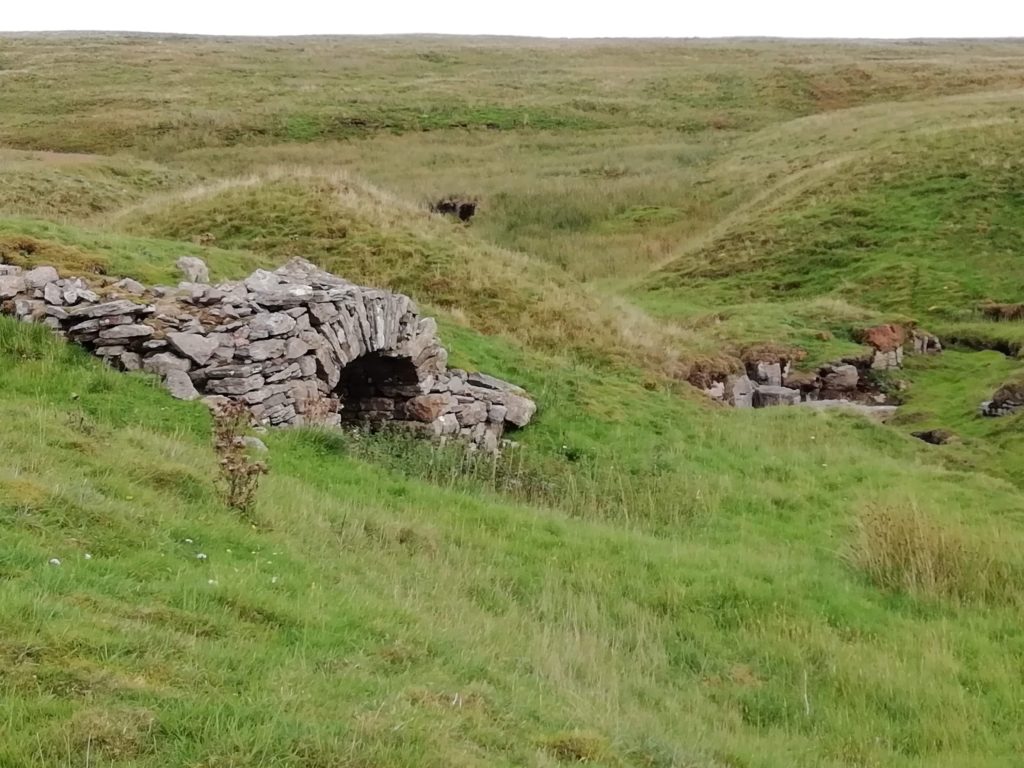 Just above the kiln, I go through yet another cattle gate in the dry stone walls, turn right, as I have now for three days running, and start out along Lady Jane’s Highway toward Hell Gill. I keep trying to get all the way to Hell Gill and beyond but I only come close before it’s time to turn back for one reason or another. A few miles beyond Hell Gill is the enticing Pendragon Castle, which dubious legend says was where King Uther, King Arthur’s father, died. As with so many cultural ideas, there are many reasons why it cannot be so, but the idea is so appealing in its beauty that it persists.

The weather today is warming. The rain and cold had persisted ever since we arrived over two weeks ago. The atmosphere continues to settle into my bones like the soft, lilting speech I hear around me at the pub and on the train. The morning had dawned with the blowing misty rain we’d gotten used to, but by noon there were patches of blue sky

The other day I met a local man who was coming through the gate at the top of the hill just as I approached. His black and white border collie came toward me tentatively and circled back as the man closed the gate behind him. We exchanged pleasantries and, as often happens, my accent lead him to ask where I come from. As it turned out his wife is also American. We talked about the Dales and the similarity here to the weather I’ve known in the Pacific Northwest. I asked some stupid questions about the Lady Anne Highway. He answered with great forbearance. He told me that the first two ruins along the way had both been inns when the road was the only one in the area. The first, High Dyke, more tumbled down than the second, had been built in the early 17th century and the second, High Hall, about 100 years later. We went our ways, he with his dog for their second walk of the day up on Lady Anne’s Highway, me down towards the Moorcock Pub as an ending to my afternoon of walking.

Over the days that I’ve walked there, it has been this second ruin, High Hall, that’s come to capture my imagination. Perched there along the ridge above the fells, it had been built right on the high road where the drovers used to drive their sheep to market and everyone had used from time immemorial to travel from one town to another. Lady Anne Clifford (for whom it came to be named) used the road in Shakespeare’s time to travel from her castle in Skipton to her castle, Brougham, in Penrith. High Dyke, the older farm and inn, must have been there along the way. Perhaps she and her retinue stopped for refreshment there or even spent a night. 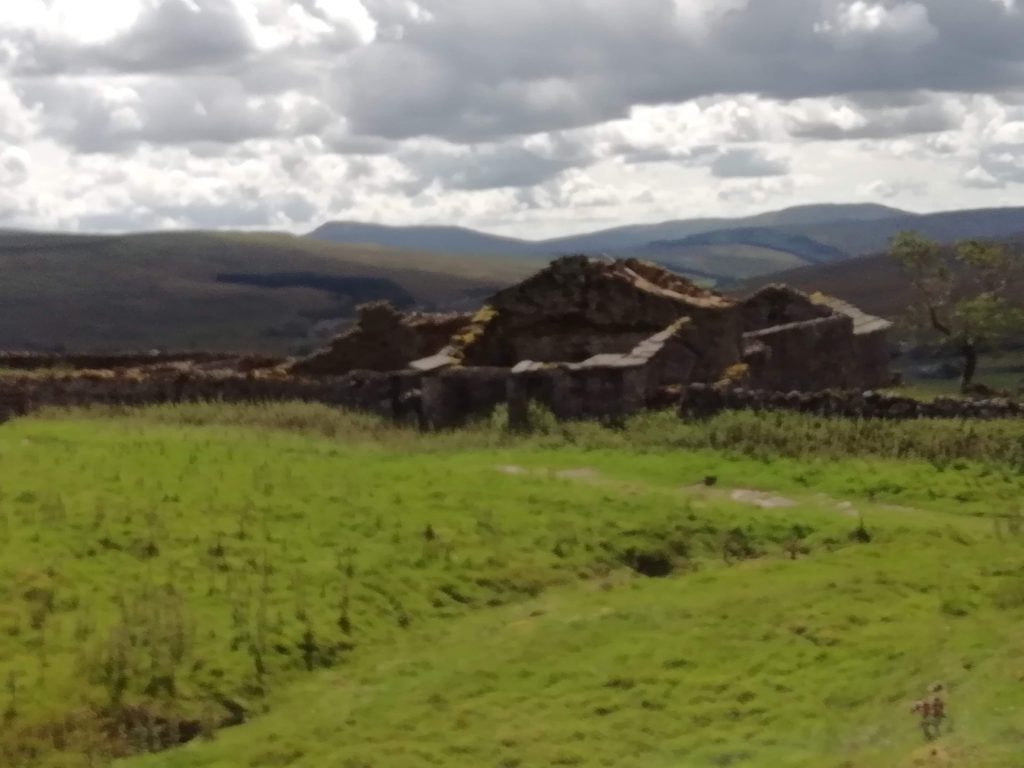 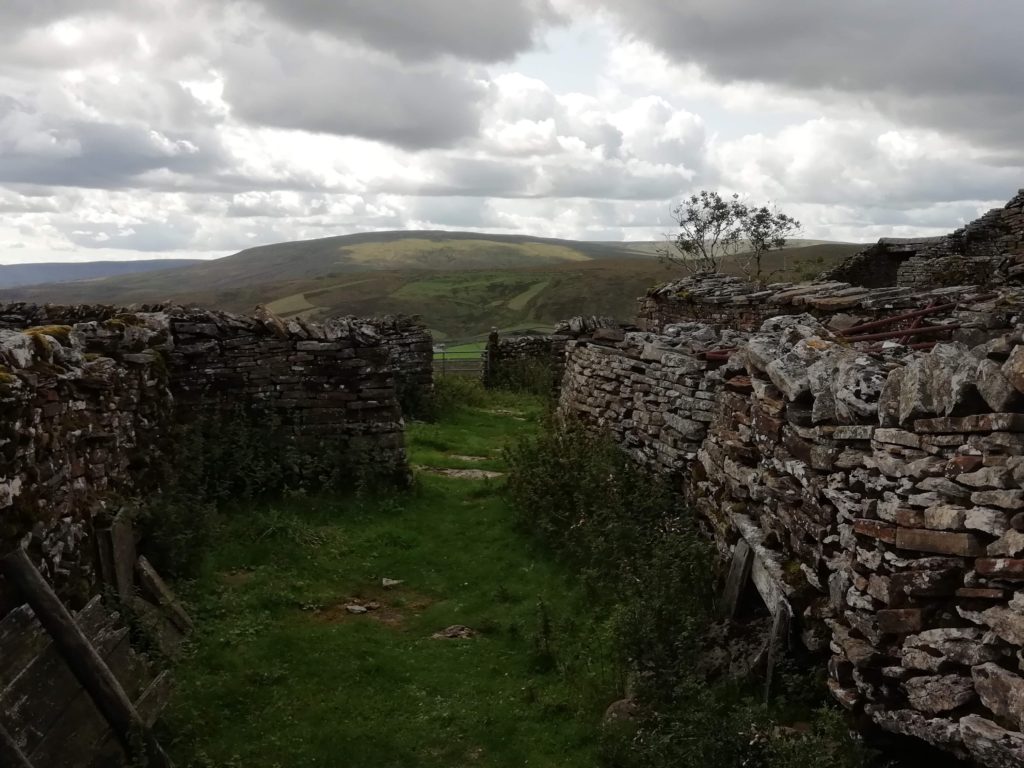 High Hall was built after Lady Anne’s day, sometime in the early 18th century when the road at the top of the ridge was still the only way to travel from one town to the next. Some of its walls have fallen in, huge stones lying in heaps among the rubble of the roof stones. Other walls remain almost intact.

On the south-west side of the ruin, where the buildings end and the hill falls away, two imposing dry stone pillars frame a spectacular view of the valley, the fells and the limestone cliffs stretching out below in their quiet, misty magnificence. A huge chunk of raw limestone rock perches on each of these high stone posts, their odd, strangely evocative forms the only remaining elements of the ruin that seem ornamental rather than structural. Their presence, so whimsical, is a link across the centuries. 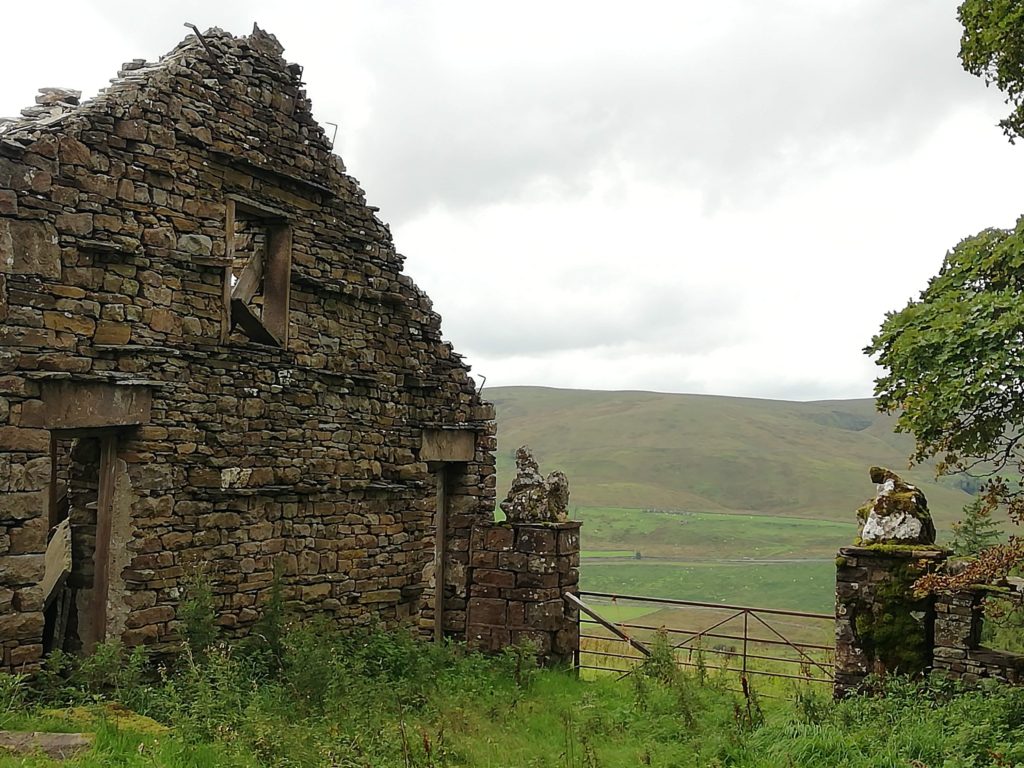 Leaning over the wall on the opposite side of what now is a courtyard bounded by dry stone walls, I can look directly through the opening between the pillars. I stand for long moments lost in the sense of grandeur that huge frame creates. I can feel the life that circulated through these rooms, quiet talk and louder laughter, dogs barking, sheep bleating and people pausing to gaze in thought at this same view, lost in the expanse. 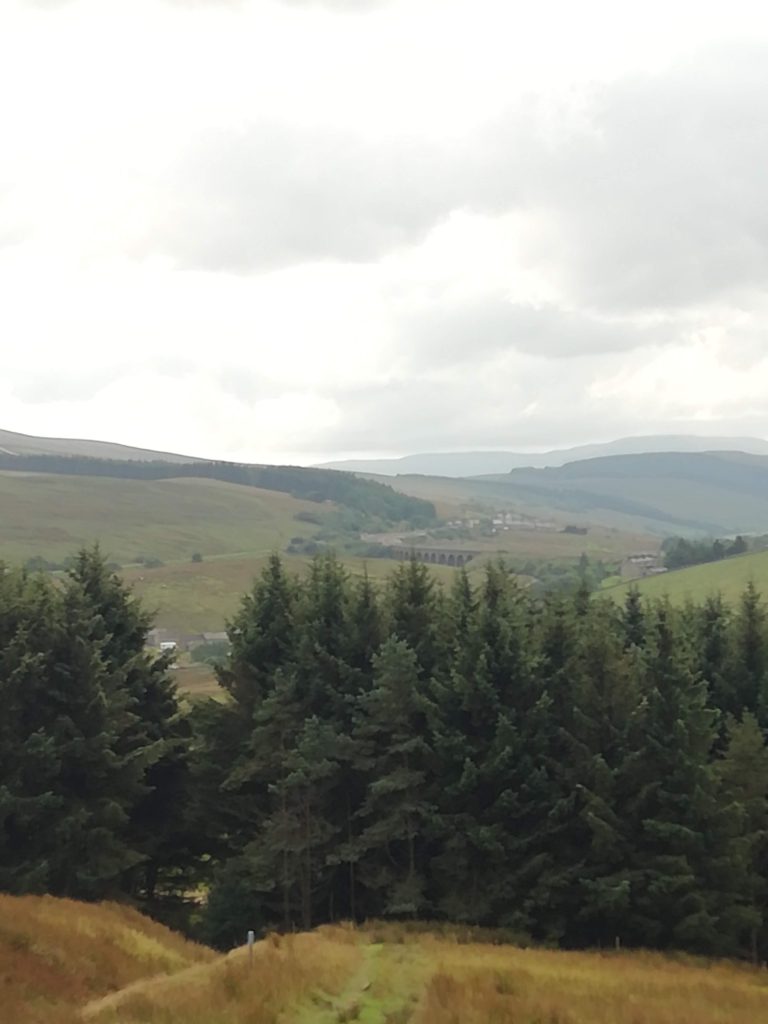 These visions enter my dreams. As I lie in bed waiting for sleep to capture me, I think of what it was like to sleep inside the walls of that house, rough woollen blankets pulled around your chin, the quiet dirt and limestone road just outside the door and the moors stretching down the hillside into the vast valleys, the strength of the stone surrounding you.

Dreaming is deeper here. The dreams go on in ways that can be followed forever through the vast rooms of the unconscious, just as you follow the pathways and climb over the stiles in the vast valleys and fell-sides of the dales, one view giving way to another as dream melts into dream.

2 Replies to “Dreams of High Hall: Notes from the Yorkshire Dales”