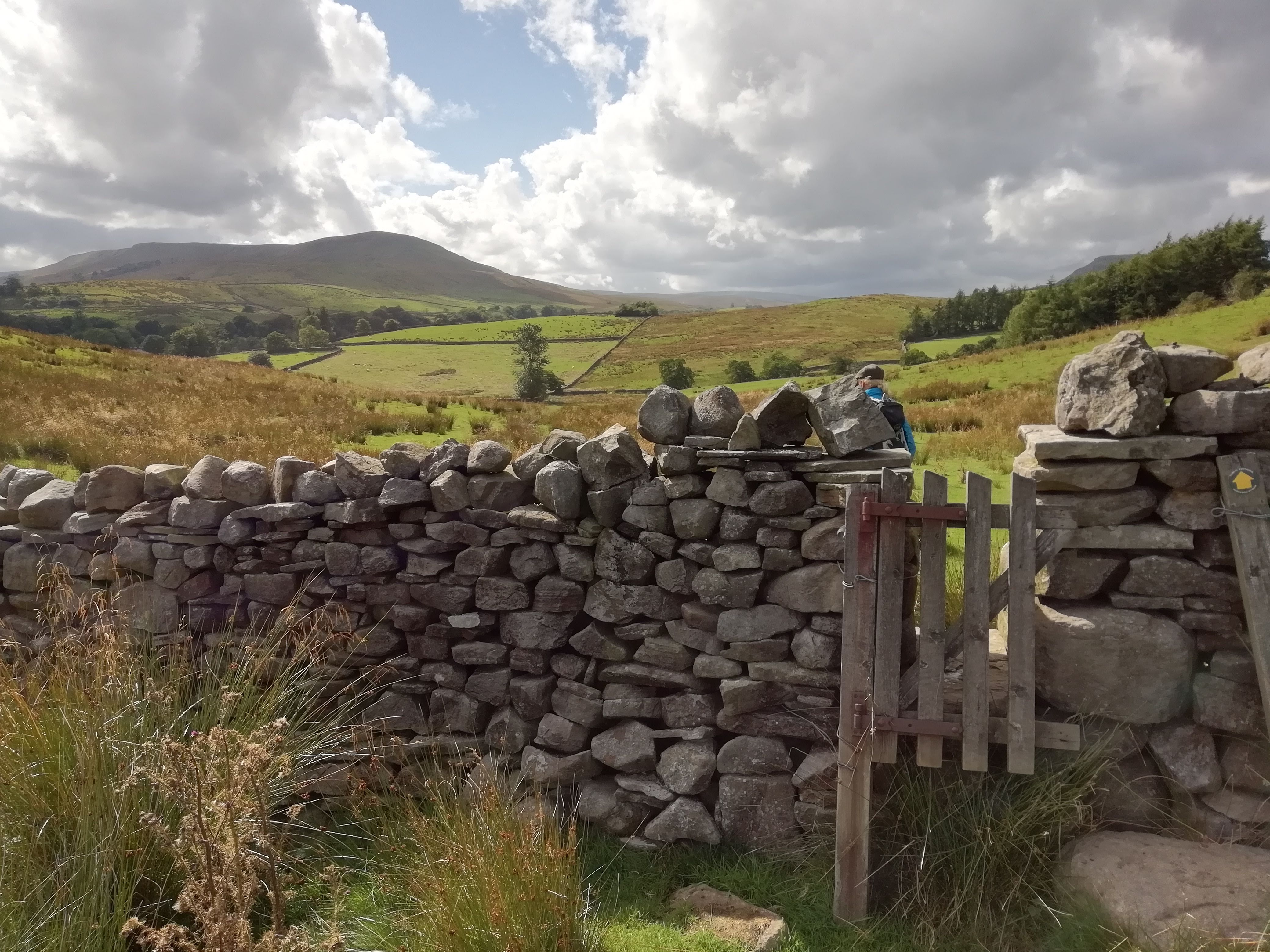 I must say that the Yorkshire Dales is a very odd place to be.  Everywhere else in the world there is heat and fire, smoke and lava, explosions and terrible winds. Here there is quiet.  There is calm expanse. There is earth, stone and water.

On our way here we stopped for a couple of days in London near the huge buildings of Canary Wharf, sheltered in an old stone house near the old docks but surrounded by the intense buzz of the energy of thousands of men and women pursuing money. We walked by the temples of the gods and goddesses: Morgan Stanley, J.P Morgan, City Bank, Barclays, Credit Suisse, HSBC, National Bank of Abu Dhabi, and the other lesser deities. A priestess of Barclays even descended into the bowels of the earth with us, resplendent in her headdress of a thousand tiny blue-black cornrows, her bespoke fingernails each painted with different intricate designs and colors, her clothes like those of the male priests, subdued, beautifully tailored, dark bottom, white top, her designer shoes understated with slender tall heels. She sprinkled us liberally with her grace,  connecting us to her heavens for a few moments then flowing off in a hum of energy, up the escalators to the heights. 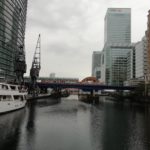 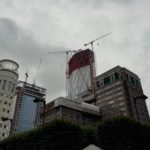 Here in the Yorkshire Dales, in Cumbria, and, more precisely, in Garsdale not far from Hawes, there are miles and miles of rolling green and green-brown hills dotted with sheep, cows and grey stone buildings with rain and rain and rain, just warm enough to actually still be pleasant. The air is clear but often foggy. You can breathe long draughts of it, clean and damp. 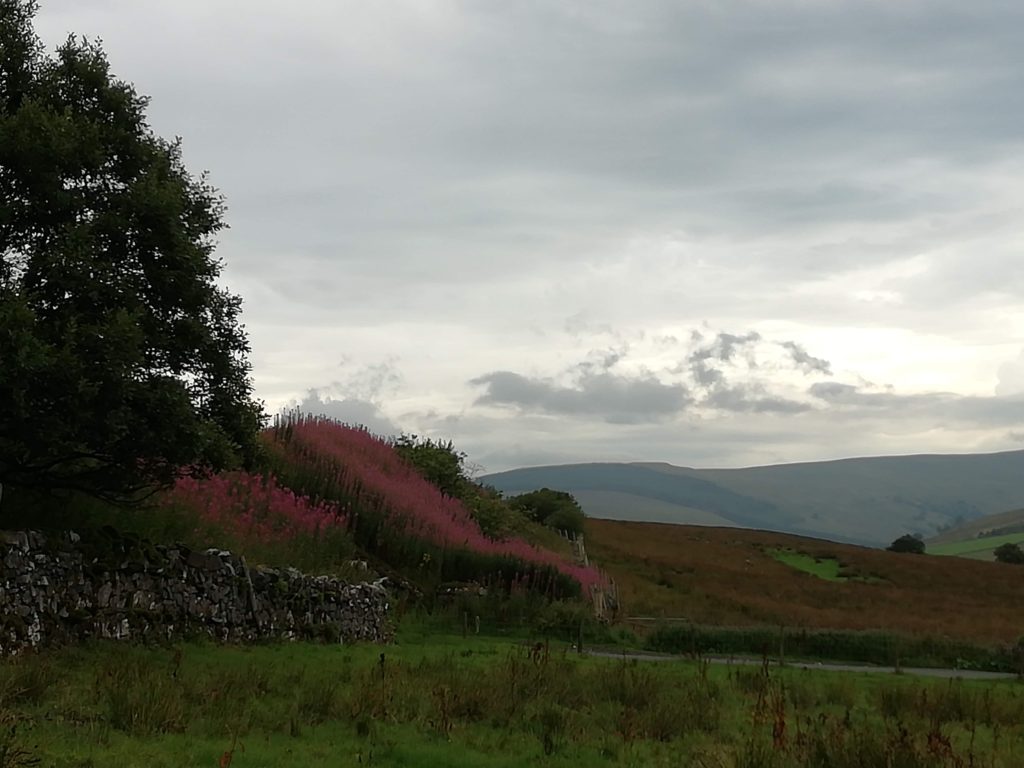 Through the window in our temporary home in the Railway Cottages I can see the tiny  Garsdale train station platform with its big red Victorian-style lamps. 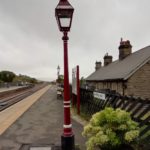 A train pulls up quietly as I write, barely audible for all its proximity, and I watch a hiker or two come out, settling backpacks on their backs. Off they’ll go across the damp moors where just ten days ago the hot sun of a persistent, unheard of heat wave was still drying the grasses. After a few days of rain that often came down with some force, the streams are rushing high. The waterfalls that run over the shelves of layered limestone that make this scenery so distinctive are frothy and yellow with mud. 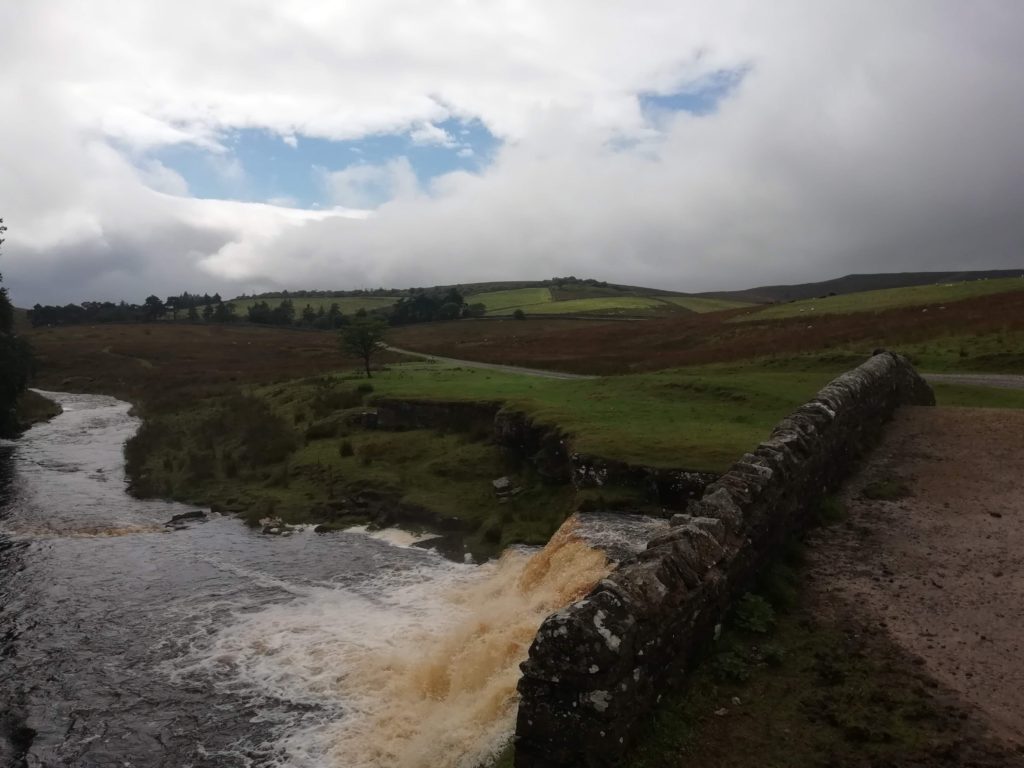 Yesterday we took the little white over-priced bus the six miles to Hawes, the village of Wensleydale Cheese and scenes from the old BBC series of All Creatures Great and Small. The nice man at the wheel drove us along the country roads lined with miles of dry stone fences and occasional groves of oak or pine. The countryside that rolled by with its large squares of undulating green went by at such a clip that I felt as if I were along with Toad on his wild ride, Rat waiting for us anxiously back at Toad Hall.

He dropped us off as a favor at the Wensleydale Cheese factory, though it wasn’t strictly on the route. Once there, I tried to get Walter to come into the cheese-making tour and museum, luring him with Wallace and Grommet quotes, but he didn’t make it much past the door. He knows all about cows and milk. He grew up with them.

Our neighbors in the Railway Cottages have a pub and guest house called the Board Inn on the main street of Hawes. We met up there as agreed when I had my fill of Wensleydale Cheese lore. By the time I came in, he was happily eating a toasty sandwich of cheese and onion near the windows and drinking a pint of their best bitter. I joined him, having learned all I could about how to make a somewhat fresh, salty cheese with gallons of raw milk.

The much anticipated Wallace and Grommet exhibit had taken about a minute to absorb. Even so, had I been a kid, I would have opted out of the rest and did what I could to plant myself in front of the screen with a loop of the Wallace and Grommet movies. As it was, I watched a nervous young blond woman demonstrate the steps of Wensleydale cheesemaking to a small room packed with tourists (being careful not to dump the whey all over the floor as she confessed she had once done), peeked into the cheesemaking room where people in white coats and white shoe wrappings worked in a stainless steel environment turning curds, breezed past the Czech tourists fresh off their tour bus, through the “interactive” museum exhibits and popped into the shop to buy some Wensleydale cheese, which like Wallace, I happen to like. 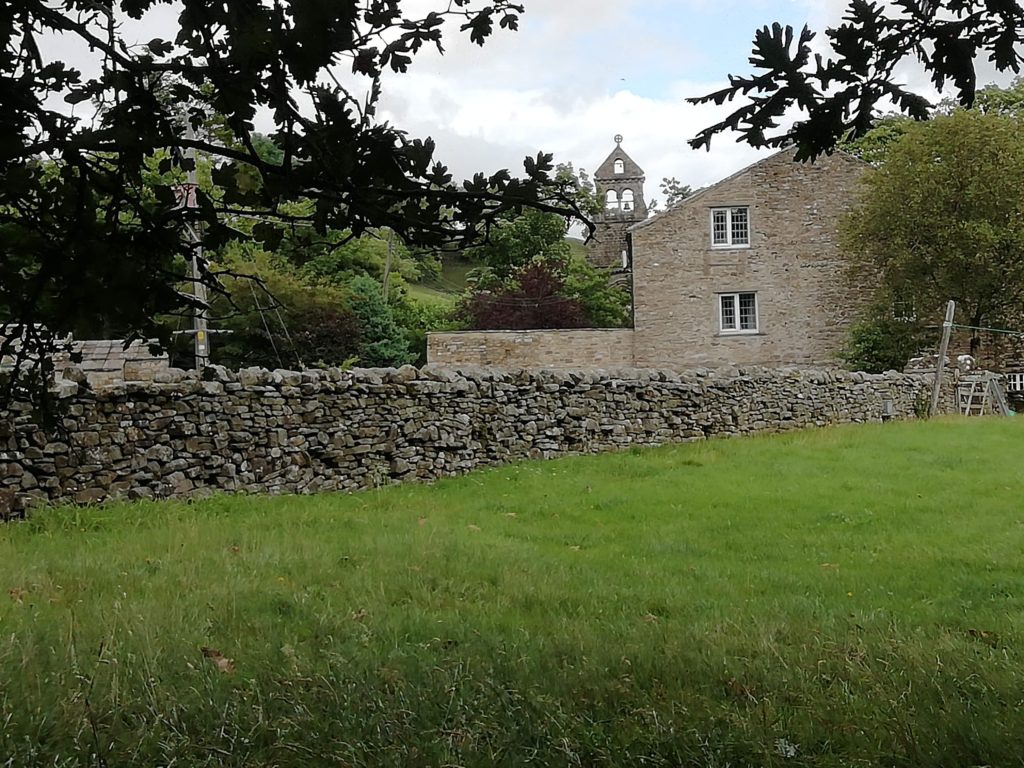 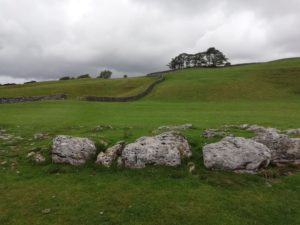 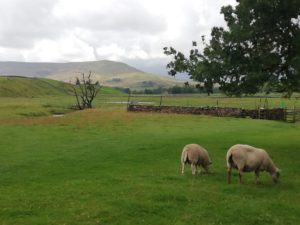 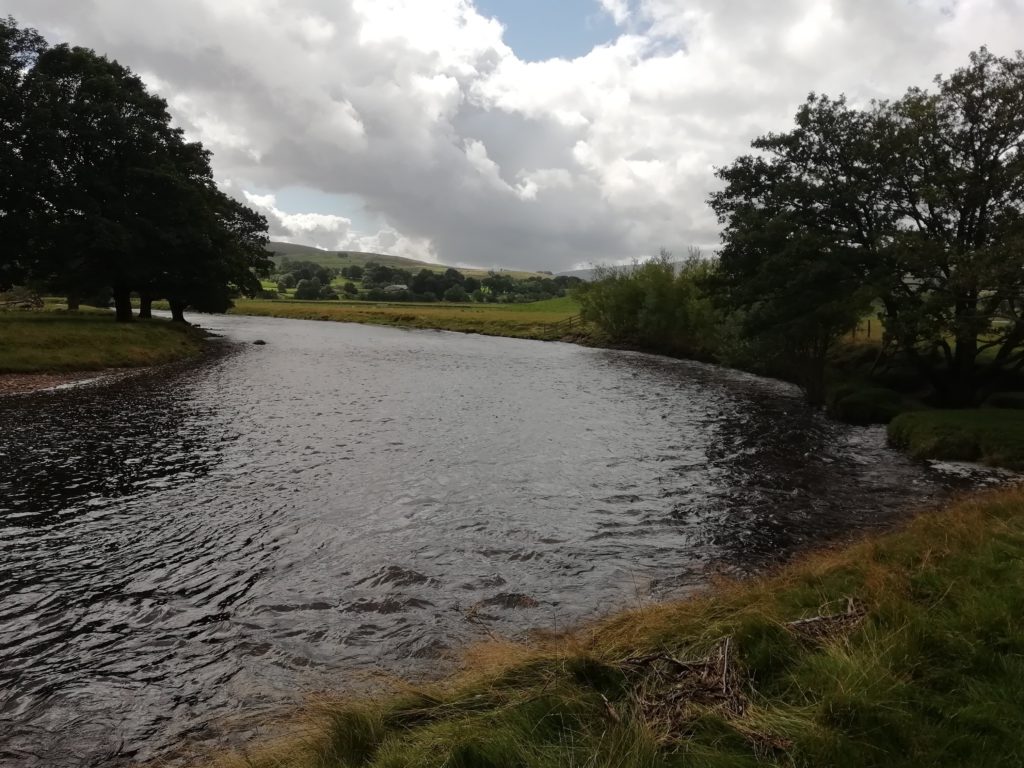 Fueled with cheese toasties and British beer, we walked the loop through the village and up and around the fields and river to the hamlet of Hardraw where we stopped for yet another pint at a lovely pub.  Then back to Hawes across the fields and streams. We picked up fruits and vegetables at the greengrocers and other provisions at the Co-op Supermarket and hopped back on the Little White Bus back to the Railway Cottages in Garsdale, the driver not as chatty and driving more slowly at the end of his day. 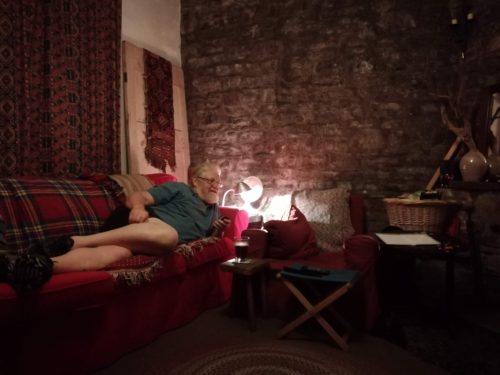 Now, again, we’re puttering around the cottage with its small, cosy rooms, waiting out the rain. Today it’s evidently part of a tropical storm called Ernesto hanging over a large swath of the British Isles. It’s August and the wind is pushing the driving rain across the moors as it has for a portion of almost every day of the entire week we’ve been here. We could be living in a November in our old home in the Northwest corner of the US were it not for the lingering roses in the garden down the row and the daisies and red campions and rosebay willowherb (what I call fireweed) still blooming in the meadows and the actual warmth of the air most days.

I have adapted to walking on the footpaths and bridle trails across the beautiful moors–to the wet feet, to picking my way around cow patties, sheep dung, mounds of rabbit pellets, bog mud, overflowing streams and puddles. I have learned a lot about sheep from sheer observation. Curious, I am even learning the names of some of the many varieties that graze in the huge expanses of fields and meadows, wet and windblown.

There are the Swaledale with their black faces, white around their noses and eyes with their rams with curling horns like our Mountain Goats back in the Western US. As I walk up a track, I may look up to see a Swaledale ram standing there, looking at me, horns prominent. Matching the brief squirt of adrenaline in my veins, I catch a quick glint in the dark liquid of his cornea as if a neuron were sending out just a spark of an impulse to charge at this intruder. But no, as if the spark had fallen on the wet bog soil,  he walks off quickly, out of my way. Only this season’s young males, still trying to follow their mother for a nip at the teat now and then, butt heads from time to time,  practising the push for hierarchy in their DNA

Then there are the big Wensleydale sheep with their grey faces, now shorn but puffy with wool in the winter, never feisty, always eating. There are many more varieties in the Dales, but these two seem to be the ones I encounter most in my ramblings. There will be a sheep demonstration on a Sunday in the field behind the Moorcock Pub where we walk for a pint every few days.  I’ll learn more about those sheep then. We may even go to a demonstration of dry stone wall construction in the nearby town of Hawes the next week. The dry stone walls around here are made of the local limestone as they have been since inhabitants built them as far back as the Bronze Age. They are built and maintained now for the same reasons they were then—to protect the livestock and to establish ownership of the valuable grasslands. 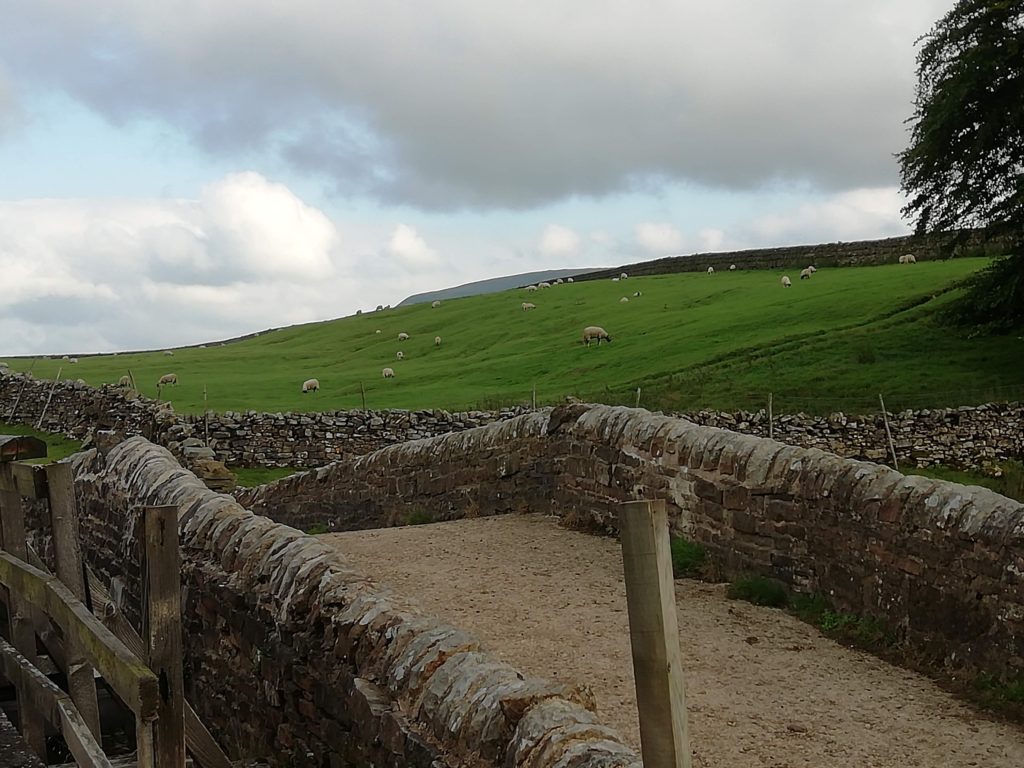 The walls and virtually all the buildings in the countryside of the Dales are made of the grey-brown stone cropping out of the hills everywhere. What humans have built here seems as much a part of the scenery as the outcrops themselves. Here where the sheep are vigorous and feisty enough to withstand the cold of winter, the walls are close to six feet tall and double walled with ruble in the middle. Where the sheep are more of a docile, low-land sort (as they are in the green lowland fields of Cumberland), the walls are lower. Around the world, dry stone walls have been used to build civilizations and support animal husbandry. For many uses, mortar was unnecessary. The art (as surely it is) of dry stone walling, lost now to our culture, could come in handy in the coming years.

As I walk the footpath that leads out from the Railway Cottages across the rolling moor, over the rushing stream with the waterfall churning with yellow-orange mud, along the path lined with wildflowers now in their last bloom, under a grand, grey stone arch of the Moorcock Viaduct, past the small herd of black and white cows who seem to know me now, I realize I have a different sensation in my body than I have ever really known. It comes from the moors, it’s certain. I’m sure it’s a known thing. It’s a feeling of brown-green calm, a settledness. Whatever I have known as me has combined itself with the rolling expanse of earth, grass and rock and has spread out like soft wet bog. Nothing can disturb it. It is itself and just itself. With this in my veins, maybe I can even return to the work of re-constructing and moving on with the book mostly eaten by my computer last March. I am stolid and accepting like the folks of Yorkshire. Implacable. 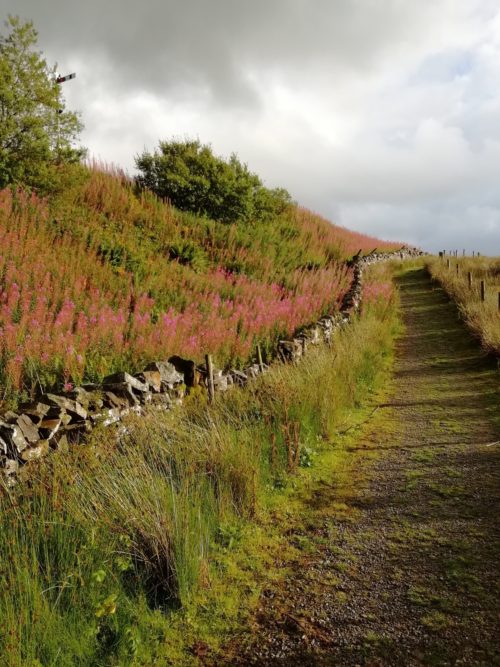 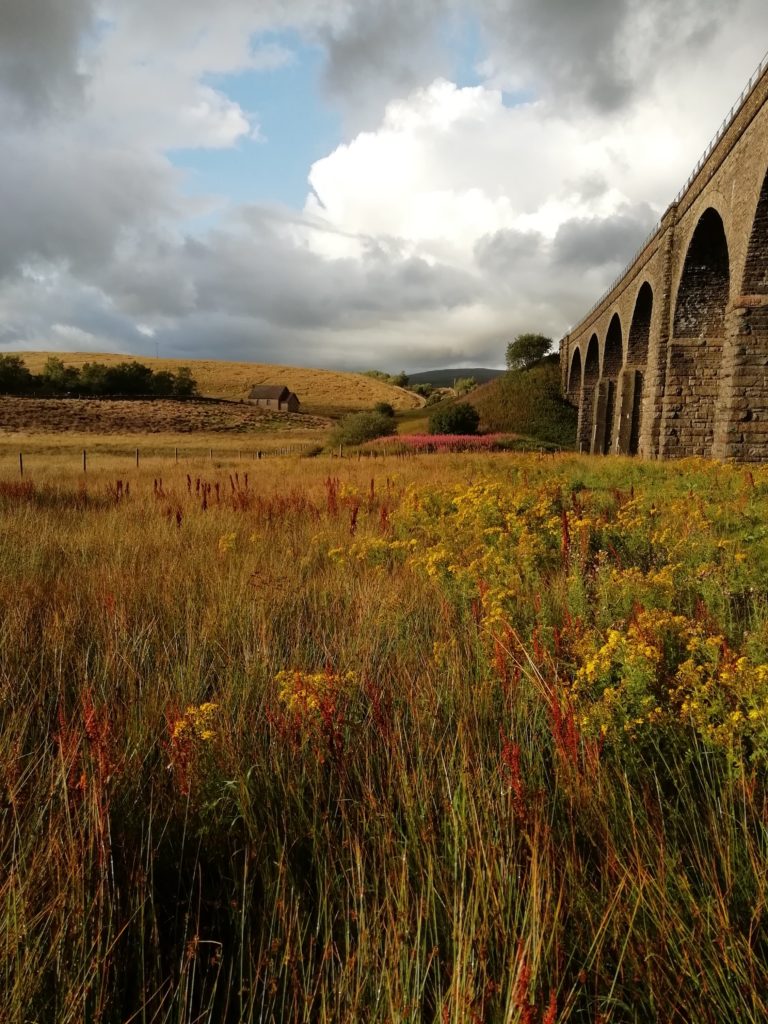 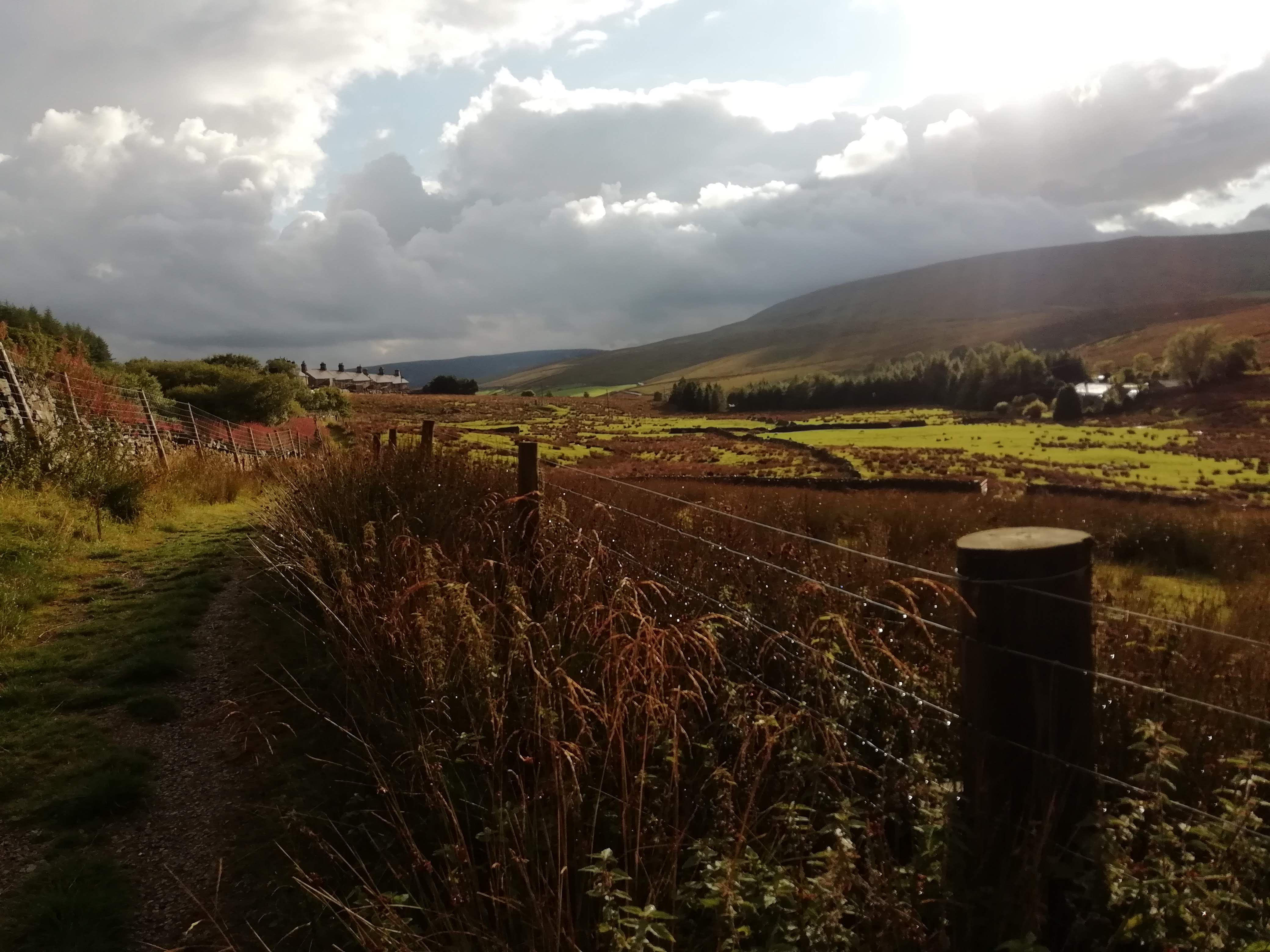 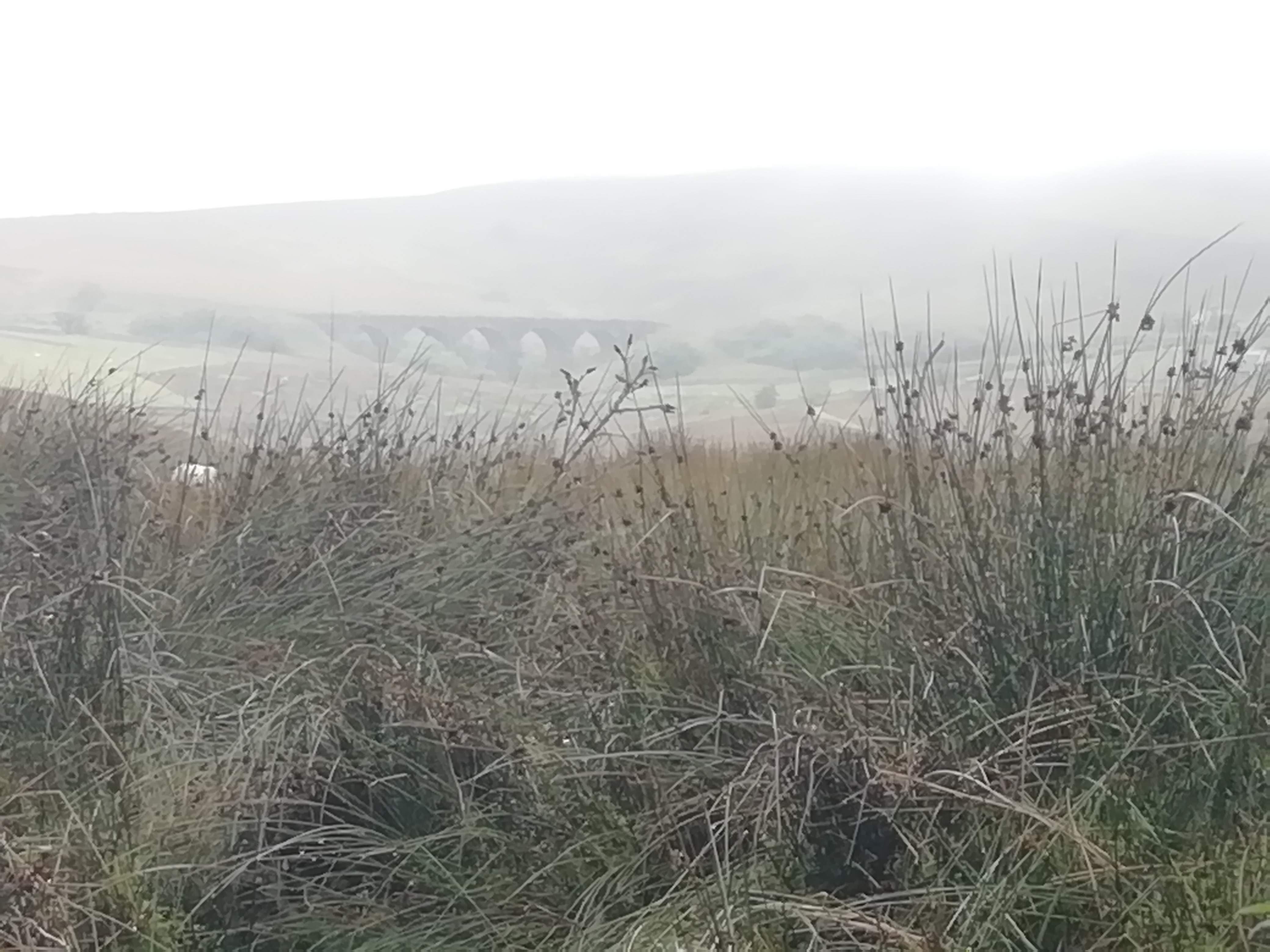 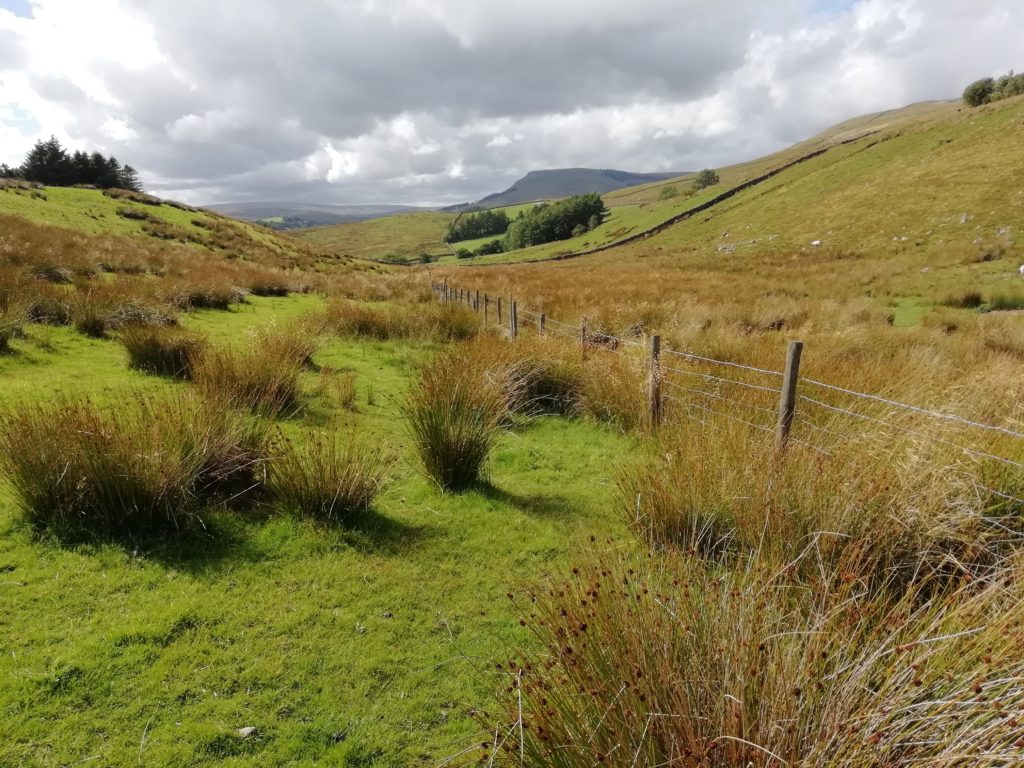