Today we got in the car and drove over the Pyrenees Orientals to Perpignan, just because we wanted to see where it was that all the people from our village in Aude want to retire. We thought we might also go to the beaches not far from this city of France which considers itself Catalan, but that was not to be. It was a beautiful drive, as all drives are in this part of France.

Over the last two months living in the department of Aude and travelling through the Ariege, our perspective has changed. Our big town has become the town of Quillan, with its population of less than four thousand.  On this scale, Perpignan is a real city. There are several pharmacies, a suburbs, several Supermarches, many chic stores, and many, many, many restaurants. There’s a very pretty canal there of no apparent name. As we sat at a small cafe at a vantage point we watched while many women, young and old, of many nationalities, took selfies or posed for photos. There are several “Parkings” labelled as usual with big blue Ps, and a museum that boasts an exhibition of Hyacinthe Rigaud, a painter evidently born in Perpignan in 1659 who died in Paris in 1743. Poor guy missed the revolution and evidently painted many great portraits of nobles with fantastic wigs (or was it their hair, coiffed to perfection?). The brochure I picked up about the exhibition is written in Catalan. Even so, I pick out these facts and the estimation that he was one of the portraitists most esteemed in his time. I’d love to see the exhibition. Some other time. 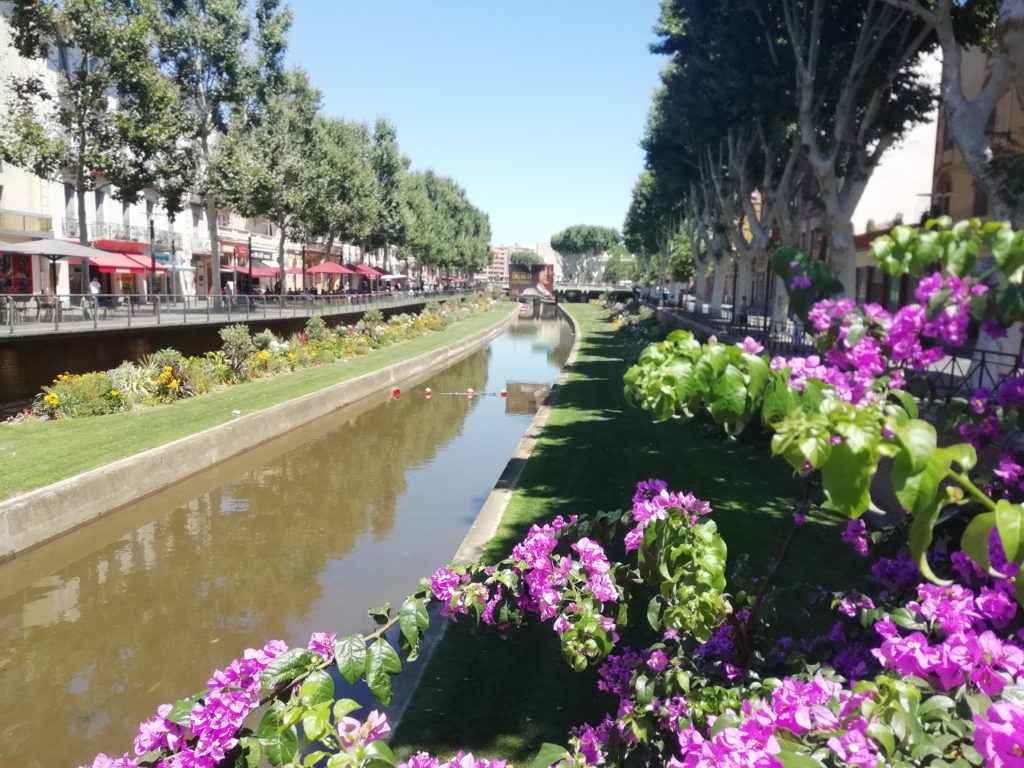 We decide to pick up some things at the big pharmacy and head out of town, to return when we are settled and the weather a bit cooler. We went back the way we’d come, through the towns that used to be labelled as part of Roussillon and are now part of Pyrenees Orientals. There are beautiful views of mountains and granite cliffs. It’s a terrain full of apricot, peach and nectarine orchards and extensive vineyards that specialize in white wines, both flinty and sweet. After stopping to buy a kilo of fresh apricots at a truck stand (where an older couple was buying 84 euros worth of fruit for themselves and their neighbors and complained about the system of weighing and labeling your own produce at the local Carrefour), we were attracted, as we drove through the village, to a shop in Maury, where there is truly flinty soil.

The shop was called Les Vignes D’Elodie. We tasted a sweet wine like Muscat and a drier wine with mineral tastes and bought both. The woman in the shop, tanned, with a face delicately lined, looked both old and young and was the mother of the Elodie who makes the wine. We complimented her both on the wine and on the beauty of her daughter’s name and got back on the road.

There’s a wonder I recognize from time to time during the day—a wonder that I am actually here. When I say “here” I mean both in this place that is constantly new, constantly unfolding beauties, a place I dreamed of spending long days but never really thought could be, and then “here” in this body, looking out through these eyes, speaking words in a language unfamiliar yet not, hearing these people around me, tasting the air and the water and the wine, moving around, somehow a network of nerves and veins and cells propelled by something called a consciousness. It is here now, it was someplace else before. It contains all the information, all the sensory impressions, all the traces of emotions that have accumulated in its passage through all those other sets of molecules, many of which also seem to contain a similar ability to accumulate these experiences and to remember and retain, or lose and forget.