Believe it or not, the Fourth of July passes totally unremarked in France. We only remembered what day it was for the US when I got a FaceBook message from my daughter in Seattle during her early morning and our early evening.

We had spent the day driving through the Ariege region with our young French/British realtor to the area around the village of Massat, at an altitude of a little over 2000 feet. 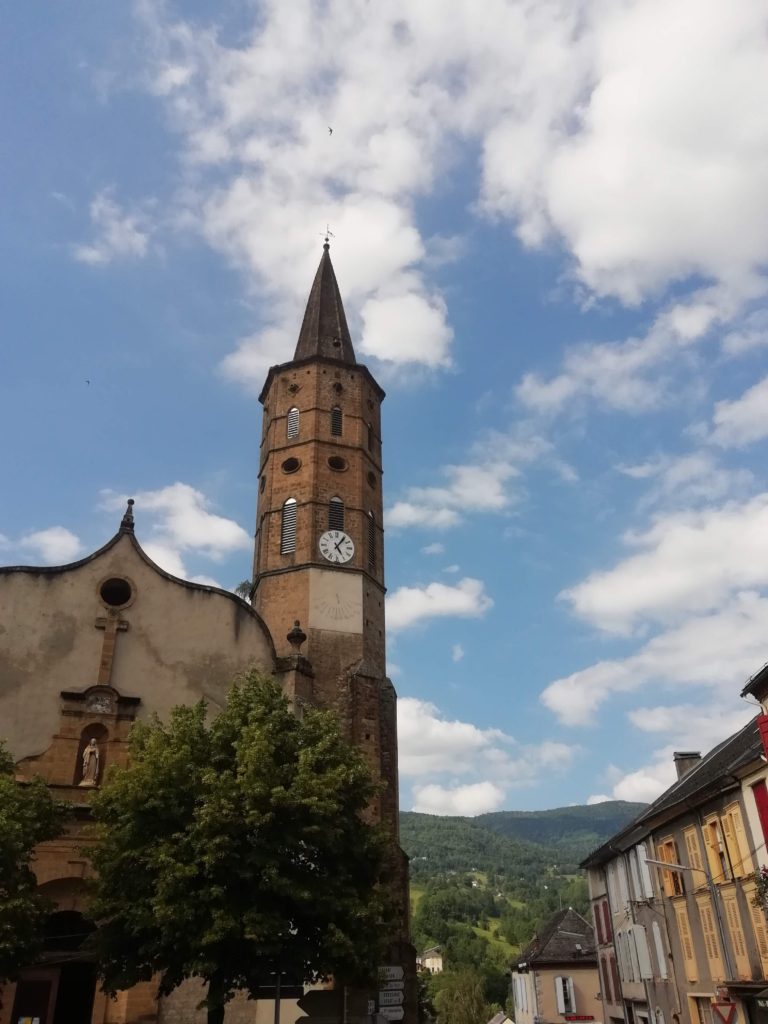 The countryside of Ariege has many microclimates. On that day we had first skirted the Pyrannees, always a craggy presence, driving through the rolling foothills with their green fields and golden fields newly hayed, with their forests of mixed oak and pine. We had gone to see a house in the hills near Massat and one higher up perched on a hillside near a rocky river. Both had their own beauties. One had a stream and some decent land that would need a good deal of enriching. Both houses needed work and both had problems that couldn’t be easily modified. Neither was the one that made us say, “Okay. This is it.” 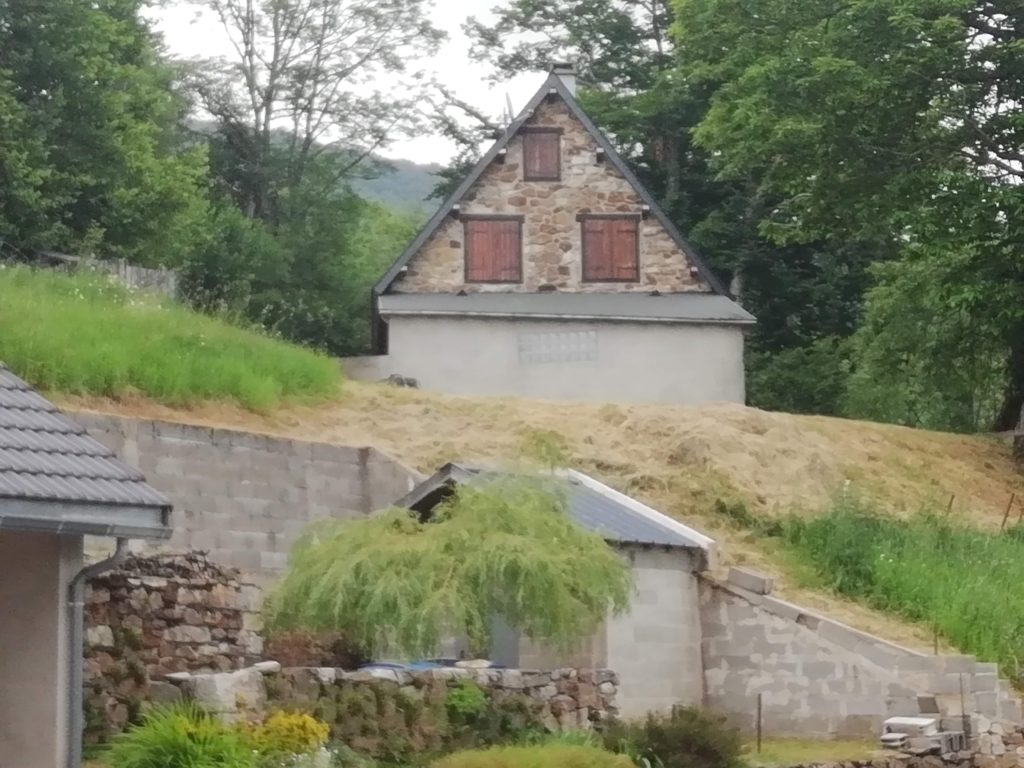 We drove back through the town of St. Girons, taking the winding road back to Lavelanet. Each time we’ve driven this gorgeous road through the mountains, it manages to catch my breath with wafts of vertigo as we drive along the knife edges of hills descending at ridiculous angles to streams below, stone huts perched on their small bits of level land before the fall. With the windows rolled down in the cooler air, the peaks of the Pyrenees white and craggy in the near distance, we heard the sound of countless cowbells from the beige Blonde d’Aquitaine cows grazing in the nooks and crannies of the green hills, occasionally wandering down to the road where they walk sedately, big bell clanging, long tails waving behind them. 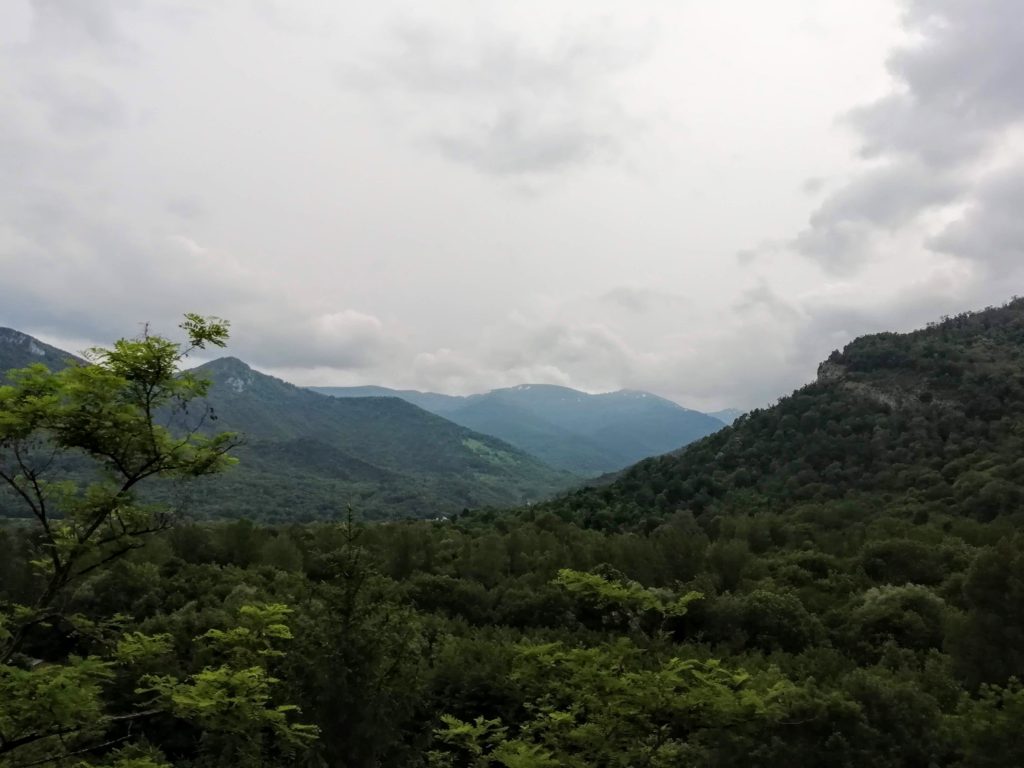 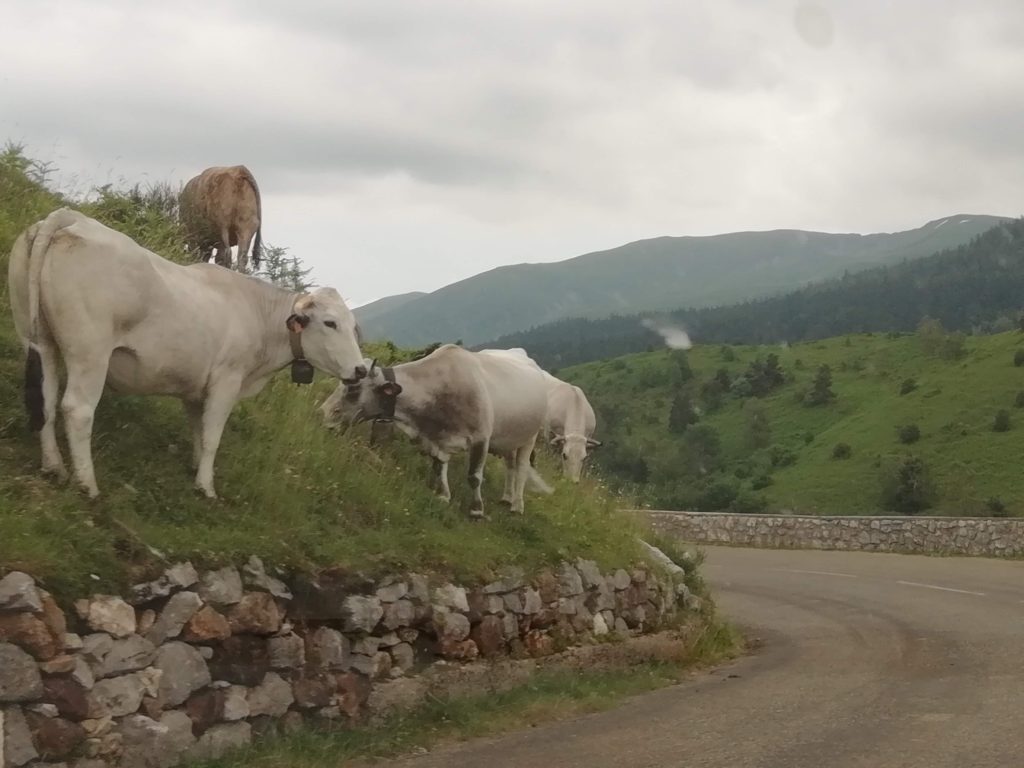 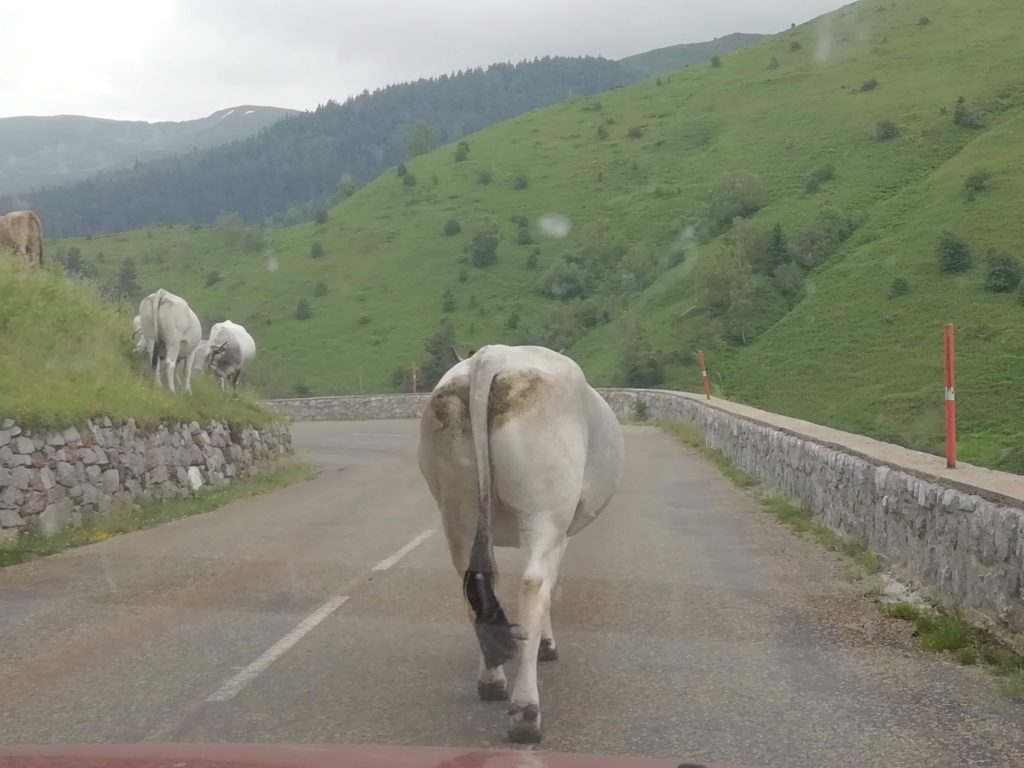 Back in Lavelanet, the realtor dropped us at our car and as we drove back towards Fa, the village we call home at the moment, I thought of what it will be like to settle here in the south of France. Here where the rhythms of life flow more easily, where people have both more warmth and yet different ways of prejudging. Projects hover around me, needing the time to spread out. They pull at my sleeves and I quiet them, saying, “Look at where we are! Just look around you. Enough!” There are friendships to be settled into, friendships that will need cultivation and thought, decisions to be made about which area feels most like a home to us, which has the climate that is both clement enough in winter yet temperate enough in the height of summer, which place has the best land, the best soil, the nicest situation and a house good enough to move into and make our own gradually. All against the pull of family back in the US, nine hours back in time and six thousand miles of flight.

I think back over our trip through Portugal and Spain, places of such specificity that have already woven themselves into the repertoire of my dreams. Granada stands out in its own way and Salema in another. They have become the background to the new rhythms of life in France.

Salema. The transcendent color of the waters of the ocean, astonishingly clear, unlike anything I’d ever experienced in such a salty sea, always in motion. A transparent green that somehow lifted me with joy, with shades of light blue made even more etheric by the green. These things made their impression in the moment but, unlike the intense sensations of cities like Seville and Barcelona, they are stickier, their pathways hardened in my brain. The fragrances of the flowers in the town—the jasmine, the jacaranda, the roses, the honeysuckle—then the incredible, novel forms and colors of the unending varieties of wildflowers on the hills above the infinite expanse of the ocean. The clear delicious songs of birds with music every nerve in my body could taste. I stood for long moments listening, hoping the variations would go on forever. The wild beaches we hiked to through villages and along fields and woods. The warmth of the strengthening sun of the early summer. The delight in swimming on and on, back and forth through water cool and moving, playing with the waves. There were small disappointments, difficulties, but nothing that tarnishes the memories I visit whenever I like. 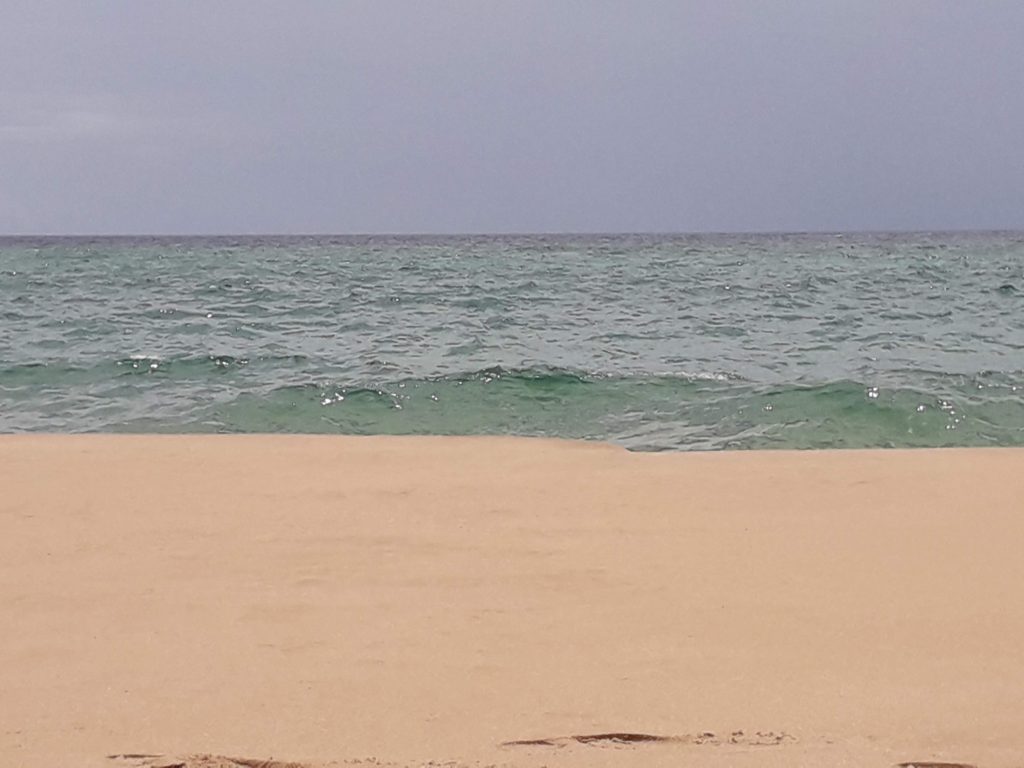 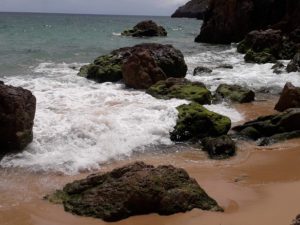 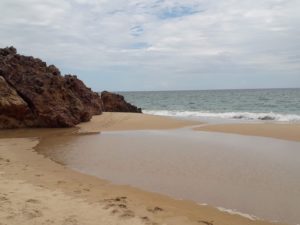 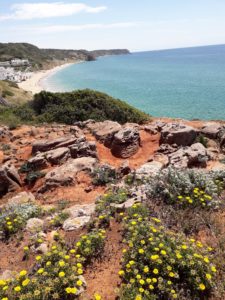 And then Granada. The Albeizin. There was something about the way the atmosphere itself seems to flow with a kind of airy fluidity. The sensation of the place seeped into the water of my cells, like the river that flows through the old town under the Alhambra, perching far above, un-ruined for me in memory by the ticket sales and the guards that chased us out like criminals before we had time to see the palace gardens and the haze over the surrounding mountains that seemed suspiciously like smog. 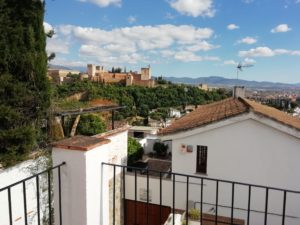 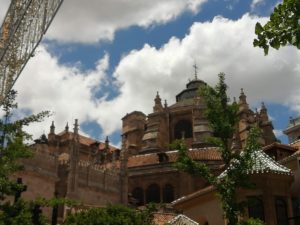 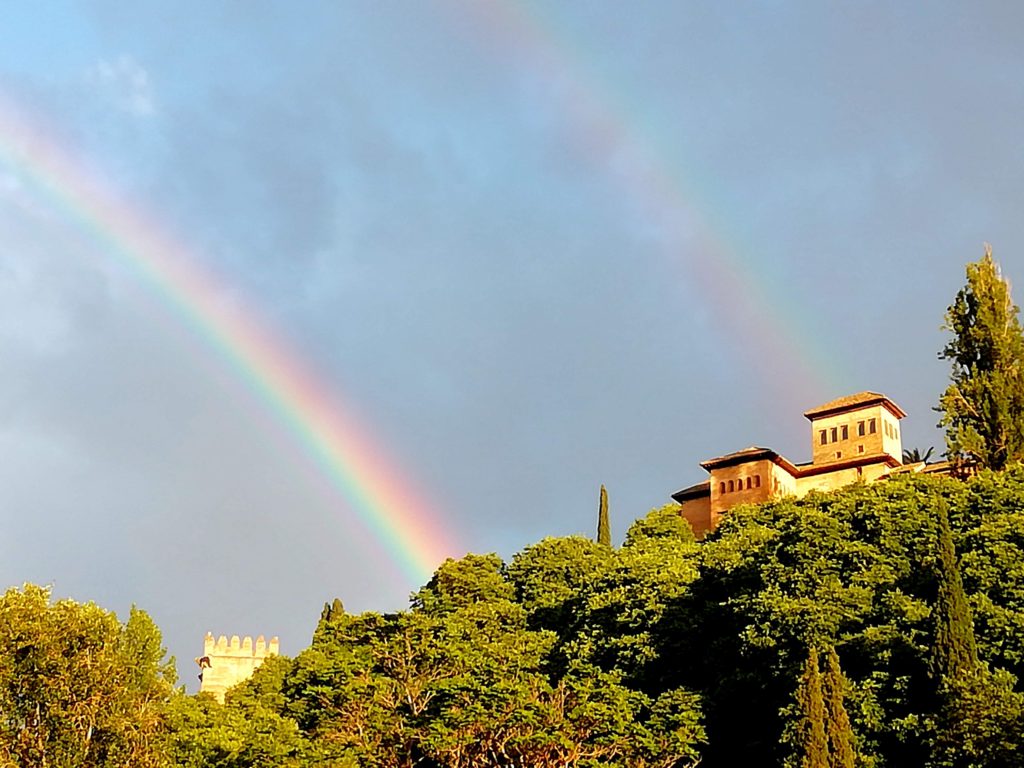 The evening we arrived in Granada, pulling our suitcases behind us, day packs on our backs, deciphering the directions to the hostel, hot and tired from the trip from Seville, a youngish woman on a bicycle, her hair short and uncovered, her arms lithe, her shirt a wonderful shade of green, her skin satisfyingly browned, swerved down the cobbles of the hill, past the stone bridge over the little river past us, grinning and calling out, “Smile! You’re on vacation!” I thought, no, we’re not really, but thanks. Vacation means a break from something to which you eventually return. We’re not on that kind of break. This is what we are doing. This is it.