My apologies for the hiatus in my blog. Here’s from Thursday… 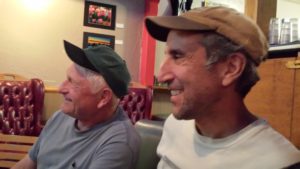 Last night we got together with our friends from Susteinability. We met at Maggie’s Pub where we had started meeting about eleven years ago. For many years, Walter and I never missed a Wednesday evening. Lately, the energy from the other participates has been pretty diffuse so we’ve let go a bit and missed a few.

Last night was full of a different energy, generated from long friendship and the weathering of years of local politics.  The evenings had started as a place to meet and talk over beers about all the topics that related to farming, gardening and living sustainably. Broad range. We shared ideas about enriching the soil, cultivating landraces, saving seeds, advocacy, local politics, Lloyd’s idea for a Double Dome swimming pool, mycology, money, getting along, child rearing, everything. The young farmers who were just starting out then have moved into town or moved away. Walter and I started a Farmer’s Market in Ferndale that morphed into a Public Market, and now, under the guidance of one of our Susteinabiilty members, is hanging on by its fingernails in the summer, hoping to barely preserve itself as a vessel of possibility which could expand as times get harder. Local farmers certainly can’t make a living with the markets that currently exist.

When we started, the pub was called The Frank-N-Stein, billed as the smallest brew-pub in America. Lloyd owned the place and the rights to Whatcom Brewing, which he continued in the back building at his house down the road. It was a loose business proposition. He opened when he felt like it, on a skeletal schedule. We’d tell Bellingham friends how wonderful it was and they’d come to Ferndale of an evening just to find it closed. But every night he was there, friends came by to talk with Lloyd, whose expansive warmth and wit enfolded everyone. In 2004, when we had just bought our farm west of Ferndale, we saw the place on Main Street as we drove through town. One night we finally decided to drop in for a pint. We were charmed. Lloyd was the kind of pub owner you imagine when you think about the fomentation of ideas in the local pubs of Boston in the 1760s and 70s. Or the places in Scotland and Ireland where rebellious plans were hatched in small, fervent groups, mixed with jokes and song. Llyod knows everyone and connects people who need to know each other. It’s a significant talent.

At the time we met, he’d just run for mayor and lost by a narrow margin. He ran again a few years later and lost a second time to a mayor we’d all voted for as a Progressive for his first term, who even to a greater degree than Obama, betrayed our hopes scandalously.  That mayor had pegged the Frank-N-Stein as “the place where all the trouble starts”.  I joined the Board of Directors of the Double Dome Swimming Pool project and tagged along as Lloyd made valiant attempts to stir up interest in this fascinating and ingeniously sustainable community project. After our first year of discouraging experience as farmers at the Bellingham Farmer’s Market, we cooked up plans for a Ferndale Farmer’s Market at the back table of the pub, Lloyd bringing us cheap microbrews and sitting to talk every so often.  There we met the array of Whatcom County characters—wild New Jersey transplants, Whatcom County natives who hunted, fished, farmed, made wine and smoked their own fresh-caught salmon, Polish immigrants who were building a Clock Tower on Main Street, a Korean orphan adopted in childhood by a Dutch Reformed family in Lynden now with five girls of her own, a red-headed woman who raised sheep and organic vegetables across from one of the town’s middle schools, a Vietnam vet who experiments with biochar and sustainable gardening of all kinds, former English majors who were trying to make a go of mixed animal and vegetable farming, a Macedonian who made wonderful ethnic sausage, etc. etc. And then there were the two of us—mid-life sweethearts of diverse backgrounds, a Minnesotan anthropologist/public intellectual/farmer/writer and an East Coast-raised intellectual and social worker/writer trying to save the world one child at a time.  We have all traveled the road together, some dropping off onto other side roads, others joining in as their paths converged with ours.

Last night, there was Lloyd, emerging from a serious illness, somehow expansive again, his wit as sharp as ever. And our friend with the five beautiful, talented and difficult girls whose last year has been incredibly complex. And a downtown landlord, friend of Lloyd’s who is opening a wine and coffee bar on the corner next to Maggie’s. And the Polish couple, successful government construction contractors and erstwhile builders of their own magnificent project, the Ferndale Clock Tower. And our newer members, the owners of the lavender farm up the road from us, fellow travelers we’ve known since they moved in about three years ago. And the neurologist of Latvian heritage who married a Latvian woman he saw walking down the street in Riga when he was there many years ago, visiting family.  We laughed and talked briefly about Trump and the joke that our Polish friends had pulled with their Halloween Trump sign on top of their Clock Tower, the highest Trump sign in Whatcom County. It was offered to them one day in October by the “Trump Guy” who drove all around the county with huge Trump signs on both sides of his steroid-sized pickup truck.  Although it was the scariest thing they could think of for Halloween, the irony, as usual, was lost on the majority. They now have Tea Partiers dropping by unannounced at the Clock Tower daily.  They collect their opinions as connoisseurs of American oddities.

As I sat back in the corner and observed for a moment, pressed up against Lloyd whose head is  now bald and watching Walter beside me telling a story, it occurred to me that there truly is a seismic shift that, although the plates have been moving all these past eleven years, is now so clearly obvious to us all. The question appeared then, like a bubble—what to do to help that which is obvious in this moment to so many to remain before us all at every moment. We will continue to  live through an unfolding crisis. There is so much to attend to and so much to push us back to a waking sleep in order to tolerate the stresses of life. Although my material resource may be slim and my physical strength may be ebbing, I have the fortitude built by years of experience watching, listening and experimenting with my actions and the inner strength built by years of spiritual practice. I am listening. I am opening my eyes deliberately every morning, remembering the dreams that kept me company during the night. I am getting up and doing one thing that, as I watch it, as I hear it, as I feel it, has positivity, life, movement, beauty. And another, and another…

It is perhaps actually when we give up hope but do not lose interest, give up our personal investment yet preserve our investment in all of us together, and in this state, continue to do the work… it is perhaps in this way that something which is in itself hope will actually begin to emerge. We may need to give up much of what we have gathered around us to give ourselves comfort, including our conceptions of ourselves and of those around us. We may need to strip ourselves down pretty close to the bone, but that’s the work anyway, isn’t it?

One Reply to “Gathering”