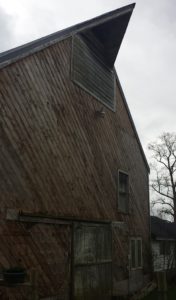 I spent close to two hours this morning without thinking about Trump, first deep in meditation and then absorbed, deliberately, in finishing a novel I’ve been reading.

For the few days since the end of the kind of the time-keeping we reserve for the good weather, I’d been enjoying waking up with the sun, just before it rises.  It’s urging me up early. I will keep pushing my waking earlier, moving against the direction of the sun’s path for a bit so I can regain my old habit. I stayed in bed this morning, though, to absorb the jolt of the night, but I vowed it would be the exception. It is better for me to be up for a while before the light returns. I love the quiet, the stillness of the energy before the energy of the light begins moving molecules faster and faster.

Election day dawned with a full blue sky, warm and still. The breeze began mid-morning and kept freshening, bringing more clouds, some with gray centers. The wind was warm and the sun shone on and off, heating things up to a record for around here this late in November.  There was a pause in the settling of the season into rain and wind and chill. The moon, visible just around our early dusk, was almost exactly half, just like the balance of our country. I watched it float over the barn as I finished preparing a meal for our guests and drank wine and thought about how nature sometimes seems to reflect the state of the human condition.

The repairs on the barn were completed two days ago. It is solid and sturdy and filled with the presence of the huge mow and the old stalls. It feels good sitting there in our consciousness of the space of our land, whole, healthy, a weight, a capacity, a real place. It could become whatever could be imagined—a place for refugees, perhaps, from all this. On the morning of the election, I took a walk to see what was happening in the world.

Somewhere along the way, practicing seeing with eyes that took in all the green, blue, brown, orange light into an infinite mind, a thought experiment occurred to me. What if someone were to be born without the mechanism to invert the image created by the light coming in through the curving cornea? They would then, presumably, see a world upside down from those with “normal” occipital brains. From my point of view, then, as this gifted person, would it be that the sky would be below my head and my feet above my eyes, walking along a road above my feet? But, I would then never know that my “up” was not the other person’s, and my “down” their “up”. Would it change anything about how I went about doing things? Not, I think. I began to smile to myself. How do we know how anyone perceives the light, the sound let alone the complexities of all the interactions of humans around them in circles spiraling outwards? We assume we take in all this sensory information and experience it pretty much in the same way. After all, the way we’re set up has many more similarities than differences. But hold on, there are so many subtle differences as well!  Happy in the brightness of everything around me, I wove out methods in my mind to test whether someone had this reversal of ordinary visual perception, hitting on an experiment I thought could clinch it.

These thoughts gradually hooked themselves up to another chain—how do we know what anyone is perceiving? That it is anything like what I, in this particular ego, perceive? We hear speech, we are designed to feel the same emotions we see in another’s expression, movement, tone. We can touch each others’ skin and seem to feel the same sensations they feel as we touch. We can smell—fear, exertion, the earthy smell of illness. We can occasionally sense something more directly with an organ not necessarily physical. But we cannot perceive directly what another ego perceives, not even with our most intensive creative imagining, not even if we have lived intimately for years and years. We try to devise verbal experiments to catch them out, but more often than not, I am sure we mistake one thing for another.

My neighbors, I am sure, in some part see promise in Donald Trump. They see hope where theirs was almost dead.  Where I see a deadened consciousness, they may see light, inspiration. What does their perception do to how things will unfold, minute to minute.  There is no experiment I can think of that will allow me to understand whether each one somehow perceives an inversion of the objects, the events that I perceive.  I can only use my organ of imagination. I can only create other possibility so other imaginations, hiding somehow within the packages of human individuality, might see a way to jump in and ride along together for awhile. Those possibilities, built bit by bit, day after day, I imagine will help me and those I love to survive. I imagine they may even percolate outwards. Even someone seeing an inversion of the objects I am seeing might benefit. Hard to tell.  But what else can I do but act from my own perceptions and settle my mind so I can see more clearly? There’s certainly a lot to be done so we can continue taking care of each other, here, in this world where we have somehow ended up, somehow together.