This morning, lying in bed, I found myself looking for a long moment into the pattern of clouds out beyond the silhouette of the now mostly bare maple in the front yard. The last few golden yellow leaves were hanging with delicate attachment to the darkened lower branches. They  drew me in—layers stroked with smoky gray, luminous white, lighter gray and pearl–in somehow just the right pattern– swirled with such grace, an opening revealing a patch of brilliant blue in perfect cadence.  Something shifted internally.  I was gone.  Just as looking into the blue eyes of your lover, the “I” of you becomes spreads out to an infinity where edges no longer apply. The inside and the outside suddenly have no separation.

As we walk around in our lives, the forms of our bodies allow our consciousness to seem impermeable. Ever since I can remember being alive, I have worried this experience, chewing on it to get at its juice. How is it that the inside I explore every moment, awake and asleep, is not accessible to those around me?  I see a face lit up in a passing car as if in a circle of light and breathe in the particular savor of that soul, yet it is unknowable whether any other person, inside a coat she wears buttoned up all around her, will, walking this same road at some other time, feel the same sensations as a car passes by. How is it that I can watch someone’s movements, hear their words, experience some emanation, some music, some color–maybe some jolt–and yet not experience the inside of them the way I experience what is whorling in my own mind?

Looking directly into the sky this morning was like looking into the eyes of my dear friend Shamcher in those brief moments so long ago when we stopped in passing in the hallway. We had been known each other for only a few short weeks or even days, I can’t remember, playing together in our respective roles in the world like children, he eighty-three years, me, twenty-four. We had taken the subway from the apartment in Maryland to the office buildings of the Senate where, together, we opened doors into closed meetings and talked to Senators about Ocean Thermal Energy Conversion (his passion in life) and skipped to a cafe, arm in arm.  Then we had traveled to this spot in Ontario together, stopping in Niagra Falls where he had grumpily refused (it was just lots of water coming down) to leave the car while my husband and I viewed the overwhelming waters, standing in the mist.

In that moment in the hallway, we had both just come from a meditation in the large room of the building .  There, attendig a Sufi gathering with old and new friends, we both both seemed to feel just a little out of place -I because I was young and a stranger to many, and he because he was old and wise. He took my hand and looked, just looked, across into my eyes. For a briefest instant, there was a flash of embarrassment between us, a swift, small bird flying across our vision. Then all awareness of emotion was gone, completely, as if it had never been. All that was left was the opening through the blue of his eyes. And then that, too,  vanished  into a vastness I had never before known, somehow composed only of  light that was not light, of such resonance and depth that all that could be created was present, without end. 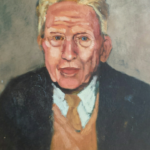 Then the scene shifts in my memory to another day at the camp, perhaps the next. A few of the adults who volunteered to be with the children were taking a group to swim in a nearby lake. One of the little girls, a five-year-old who typically clung to her mother, had taken to me. Since she was playing with me happily and I had offered to go with her to the water to give her mother a much-needed break. The mother was delighted and I was lifted up by my ability to help a friend I respected. Transported by my excitement and the animal desire to feel my muscles move in the cool water on that bright summer day, I asked how long it would be before they left. Impulsively, asking one of the other adults to watch her, I left the little girl with the group and ran to my tent to get my bathing suit. When I was out of sight, the girl began to cry. The spell was broken. Her mother heard, and going to console her, was drawn into taking her instead.

As I returned, breathing hard from my run, one of the volunteers offhandedly told me I no longer needed to come. Telling the mother I could now take over did no good. She was determined to go. My friend and teacher stood nearby, talking to a couple who were laughing and joking with him intimately. Overhearing, evidently having somehow paid attention to the whole situation, he interrupted his conversation and called to me in a clear voice,

“You made a choice. Now you have to live with it.”

As I stood as if rooted, tears of shame smarted my eyes, the infinite brought up short by my own moments of selfishness. It was true. Small decisions made without real awareness have a way of banging you right upside the head. Balance would take many, many more years. It’s still in progress, every moment of living in this body that carries me around. It’s a darn good thing I get to be an old woman at least for awhile. It’s just the beginning of waking up to who I really am. That one is the vastness itself. It has no limitation except that which we hold in front of it.

2 Replies to “This Morning I Was Looking At Clouds”