Somehow Memorial Day passed in the US without any ripple in the rest of the world. Spain. After living in Portugal for three weeks we are in Spain. The difference is immediate. Seville. The land of the mantilla, the bull fight and evidently Catholicism.

This is where the Inquisition started and today, nuns walking the streets in a much more evident way than in the devout land of Portugal, we have arrived, unawares, for the region’s most important religious holiday.  Half the people of the city of Seville seemed to be ducking into one of the churches on every other street, churches that seem to hide behind walls and blossoming on the inside, to take some special communion of the Eucharist of something unknown to me. 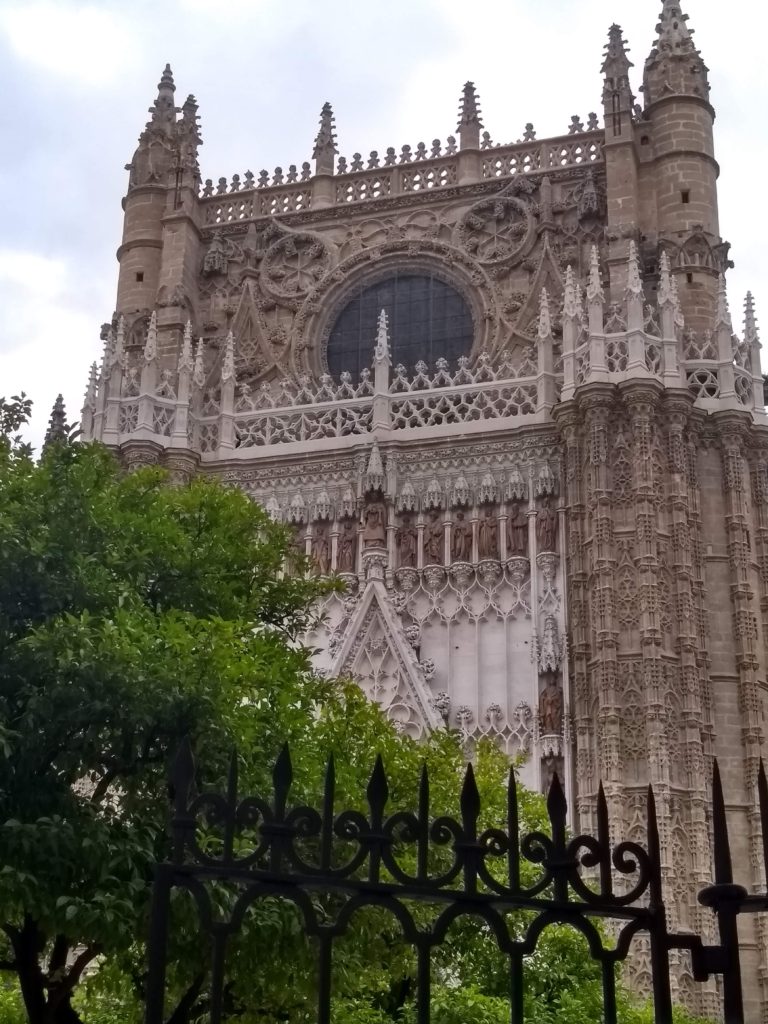 As we sit in the late afternoon at a table on the sidewalk at one of the innumerable cafes, drinking a beer, the breeze blowing, cool. Two nuns walk by in habits, one very small, perhaps a dwarf, the other, tall and dark-skinned. I see the small one only from the back, her shoes sturdy and brown just where her skirts end. She is surging ahead, almost dancing. The tall one strides to keep up and I see the side of her face, smiling as she turns up a street towards the opening of a church enclave. She is pleased to be with her friend. Somehow, I have no idea how, it brings back the memory of two horse-drawn carts full of gypsies we saw trotting at a fast pace up the hill past the Intermarché Hipermarket in Lagos one morning as we waited for the bus. Each cart carried five or six people, all adjusting themselves as they got ready for what awaited them of the day, one or two faces with expressions of irritation, everyone somehow in motion, urging the horse or tying a skirt, adjusting their position next to their brother or sister or uncle or aunt. We waited a while longer for the bus. After some time, another cart came by up the hill at full tilt with a young man tossing the reins, late for wherever the others were going.

It is 10:30 and we are in bed in our hotel and since 8 pm, marching bands have been parading through the streets in some magnificent battle of the bands in honor of something, which I presume to be associated with a saint. It is a community. We don’t have this where I come from.

Since at least 7:30, the whole city has been alive, having nothing to do with this festival.  I have discovered it is the lead up to the day of Corpus Christi, practically the biggest holiday of the year.  We have stumbled on this huge festival in Seville, totally ignorant of ancient rhythms not in our blood and bones the way they are here. The city is packed.

Thursday it is the holiday itself, starting with a mass in the morning at the huge Cathedral of Seville,  Tonight, there are people out on the streets everywhere. Every other taverna and restaurant, of which there seem to be thousands, is packed with people drinking wine, sangria and beer and eating tapas. But mainly they’re talking and talking and talking…and laughing. And there is music from many places. Everyone who is not sitting with people in a cafe or talking with someone they’ve run into on the streets is walking down the street or has stopped to lean against a wall where they talk to someone on their cellphone. Sometimes someone sings somewhere. 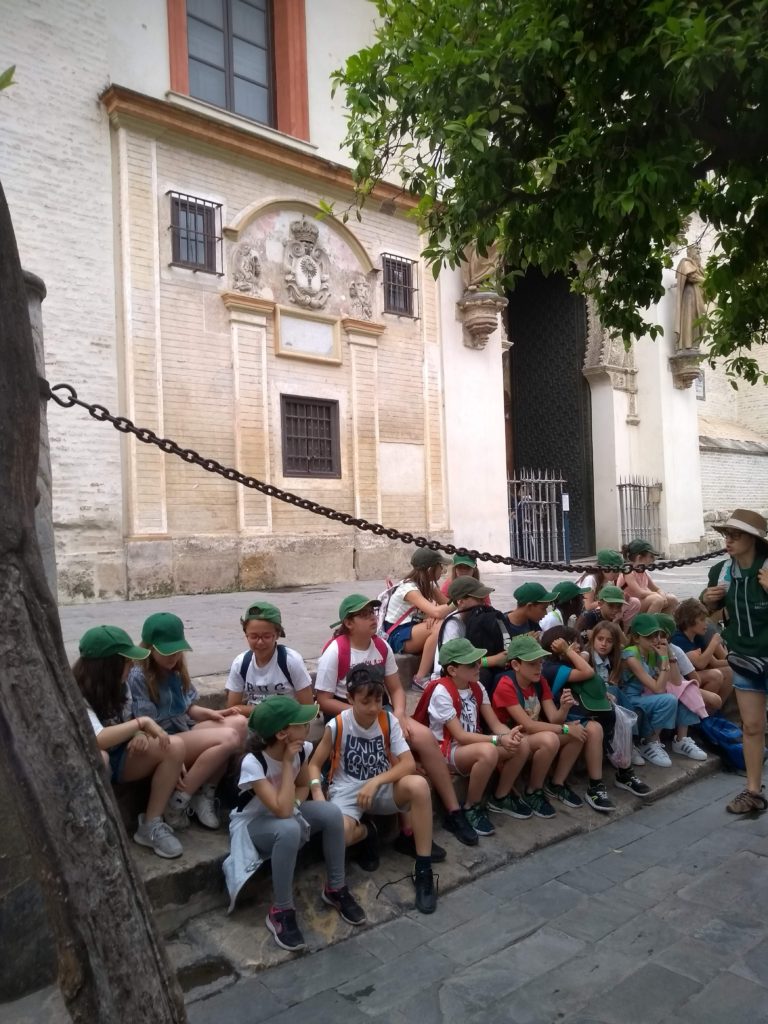 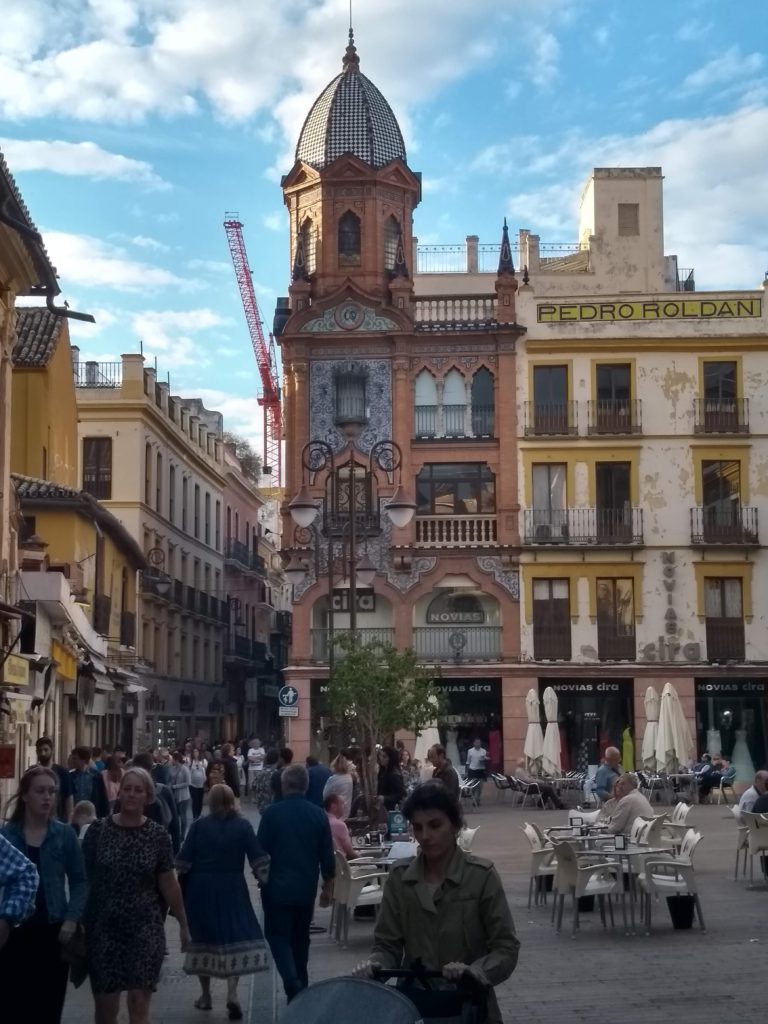 The bell in the nearby church just tolled eleven times. The street has gone quiet. It seems everyone has just gone in to bed. There will be stragglers, odd young couples having stayed late with friends, coming back across the cobbles, talking softly.

Otherwise, there will be garbage trucks during the night, a motorcycle here and there till early morning. Tomorrow summer may come to the Andalouse. There will be more parades in the street at odd times. More displays going up in unpredictable places on the streets, dark red velvet banners hung from balconies. The streets will be crowded, cars and motorcycles driving every which way, backing up, trying to negotiate corners never meant for cars, even tiny ones. 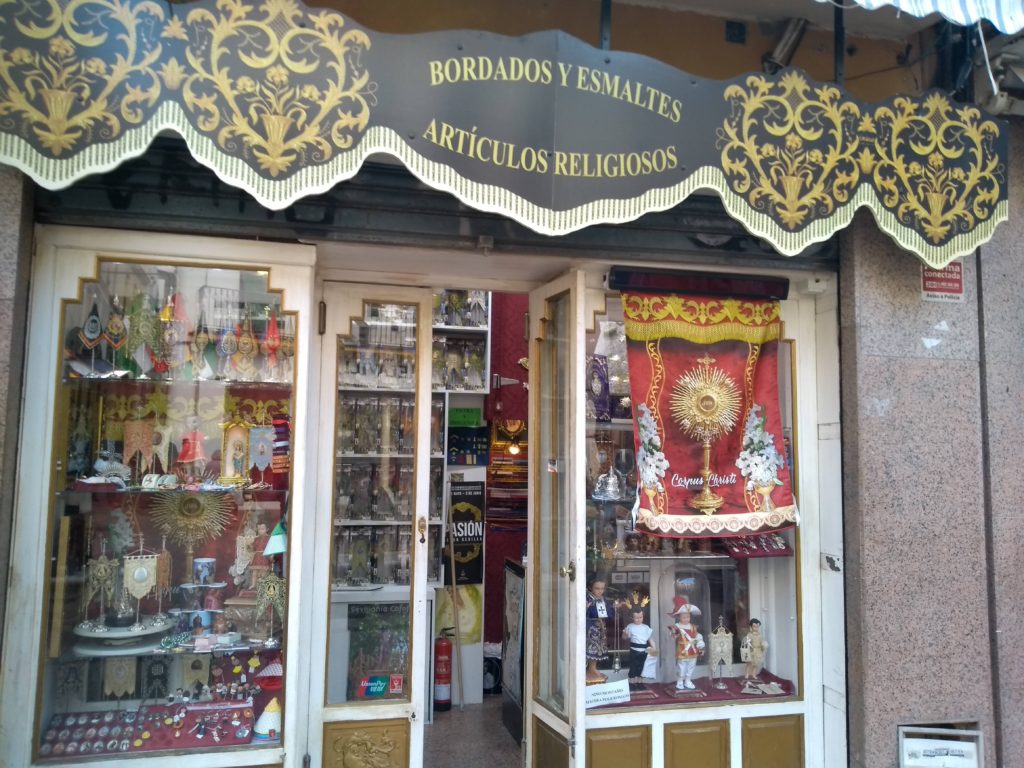 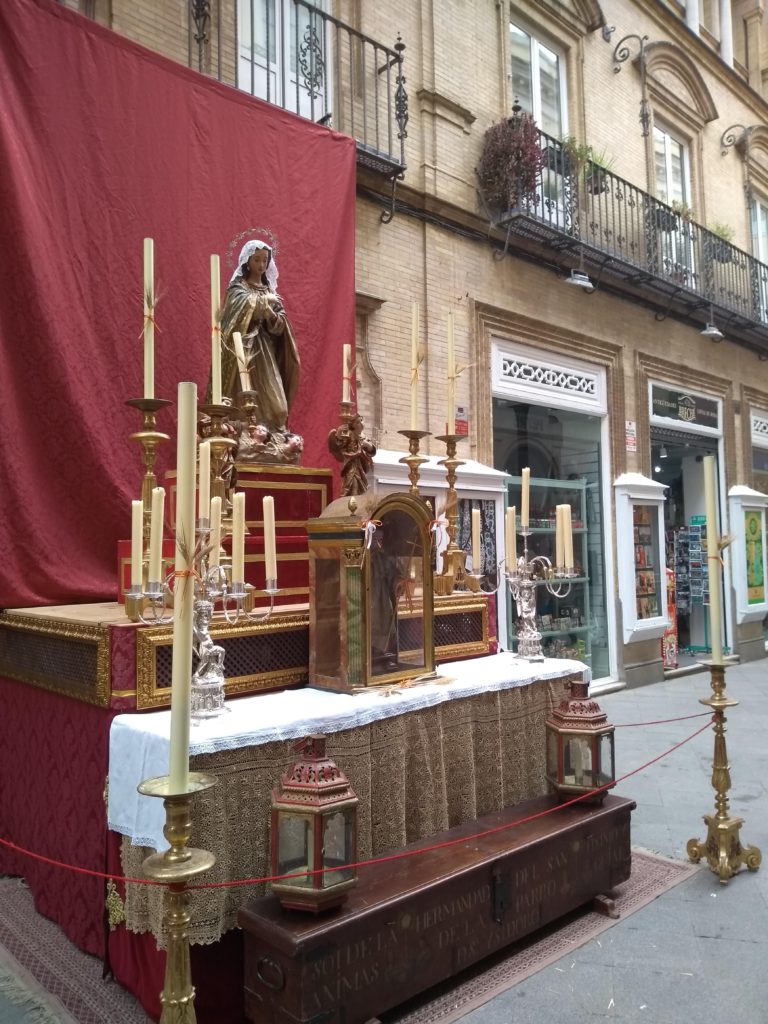 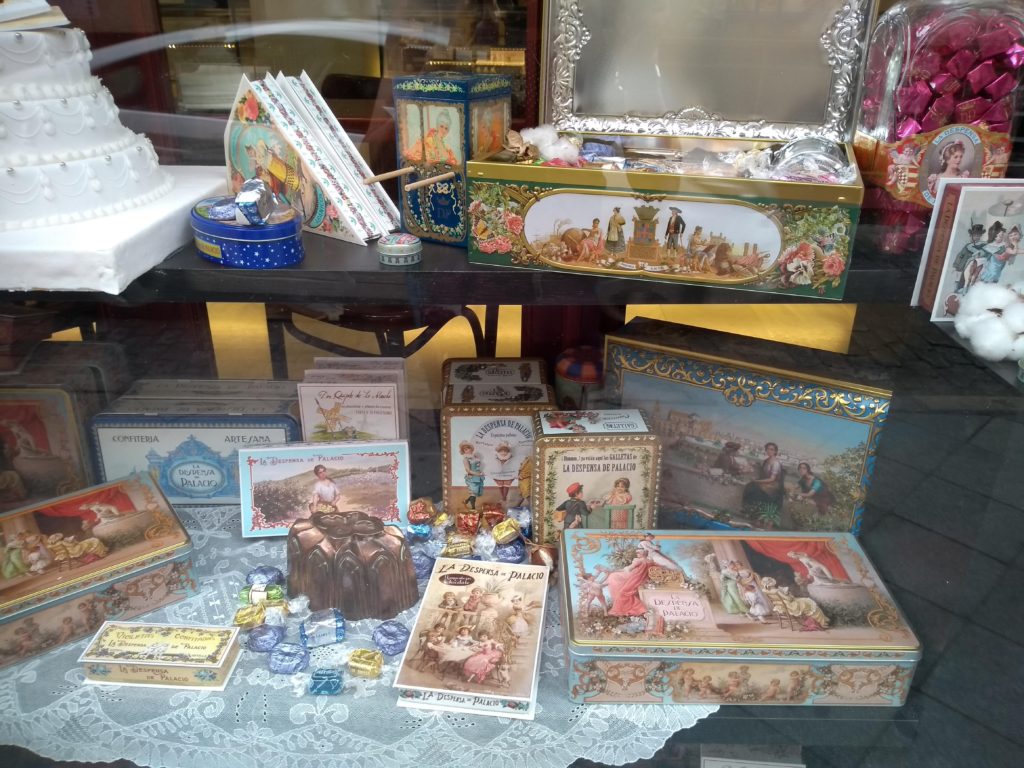