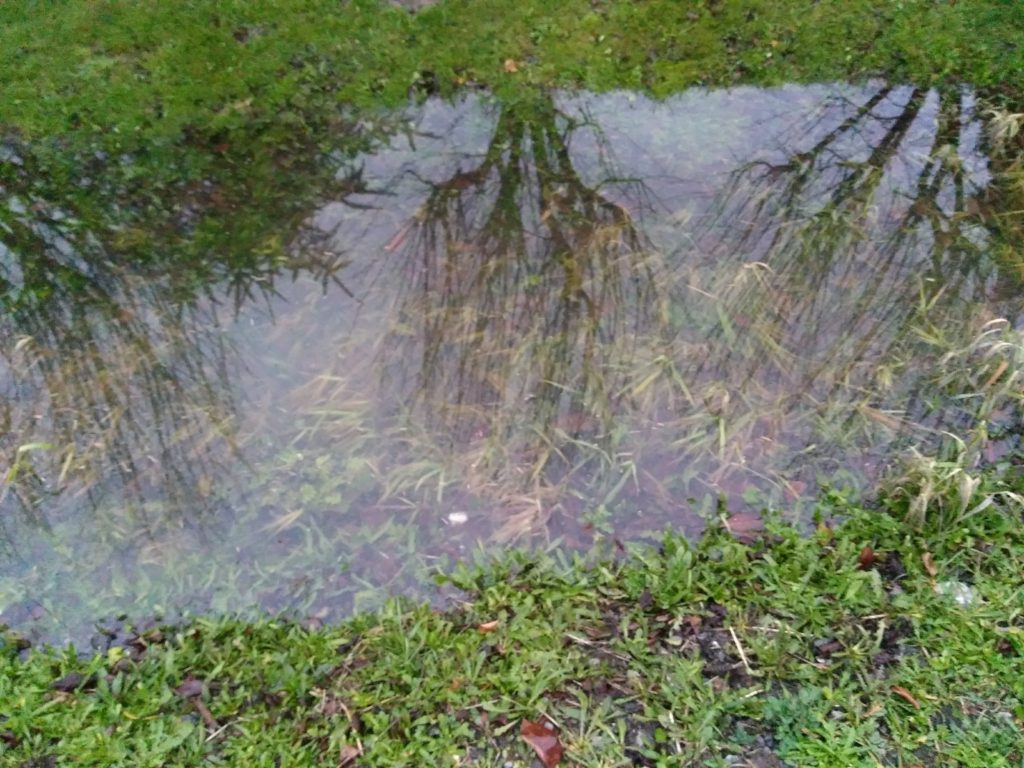 Diving into memory trusts that the image you see in the puddle by the roadside really contains the world you see there, clear and distinct at first, then fading in the depths to hazy sky and treetops.

I plunge and swim in the worlds deep in my mind, following some dreamlike trace of story, some images bright and distinct, others misty from the decay of their cellular traces. The story continues.

We slept for awhile, piled on the bed behind the driver in the cab of the big trailer truck, dozing through a stop in Marseille to load something more into the truck, waking finally with hunger pangs. We were somewhere along the Cote D’Azur in the afternoon, the sun brilliant, the air coming through the open windows, hot, with vistas of the turquoise blue sea. Do I see the same sea that I saw then, or is it the sea of the southern coast of the Mediterranean along the shores of Northern Algeria, the way I saw it so many years later, the color of that view of that sea taking the place of all others.  The Mediterranean viewed from both sides, as in some ancient journey, blends its colors.

Stopping somewhere by the road so the men could eat their lunch, we bought some cheese and a baguette at a little store around the bend and a watermelon from a truck by the road and made our own meal. The driver showed us how to cut the round melon with one swack of a big knife, splitting apart the sphere with strong hands, revealing the bright red within. We gave them each a chunk, wiped our mouths on a dirty towel he threw us from the cab and climbed back in for the rest of the trip to Cannes.

They dropped us off with friendly waves on the main street before turning off to the road to the produce market. Hot and dirty, but excited to be in this famous spot, we decided to take a swim in the Mediterranean.

We crossed the thin traffic of the main thoroughfare, lazy in the height of the afternoon, and climbed down some stairs to the narrow beach where people strolled in couples and small groups. No one was swimming. Swimming beaches, it seemed, must be somewhere else. With the day passing there was no time to search. We would have to get well out of Cannes to find a place to sleep.

We walked along the sand until we came to a place where the rock wall provided a little shelter from the view of the street. Feeling rather furtive, we stripped to our underwear and waded in until it was deep enough to swim.

The water was deliciously warm and clear. We laughed and splashed each other, feeling the dirt and sweat of the road dissolving away in the gentle salty waves. The bottom was rocky, clearly not meant for swimming, but it suited us fine, but we were quick about it. We didn’t really care for the idea of some police spotting us and deciding it was a good afternoon’s joke to haul us in for breaking some city rule. We hurried to dry ourselves with whatever we had and put on some less recently used clothes.

Finding our way back up a flight of stone steps, over the bottom road and to the main street where lovely sleek women and men passed in and out of the entrances of grand hotels, we walked along the sweeping arch of the bay, feeling talkative and gay, refreshed.

When we came again to a spot to stand on the side of the street, we stuck out our thumbs. I think it wasn’t long until a small older car pulled up with a young man driving. He motioned us to get in quickly since the cars were piling around him. We jumped in with Michel in the front and slammed the flimsy metal doors.

He, too, was in a talkative mood,  a student happy to find young people from America to tell him new things. He was on his way back to Nice at the end of his day and was eager for us to meet his wife. He would ask her, but he thought it would be no problem for us to stay with them at their apartment for the night. They were going to a street festival in the old part of Nice that evening and would be delighted if we would come with them.

The beauty of moments, one after another, of freedom from care, somehow protected and guided by sheer, sparkling joy, is what remains to me of memory from that drive along the Cote D’Azur, with the dazzling bright blue of the sea always present, even when obscured by the grand buildings and hills. We had so little to weigh us down–money, responsibilities, physical pains, none of it of any weight at all. Few desires even pulled us from the beautiful light of the afternoon.

There was a small place in some neighborhood of Nice where a door opened and husband and wife kissed and we were introduced, but only little shreds of those memories remain. What I can recall in its vivid colors in the warm, soft air of a Mediterranean evening is the small square paved with ancient stones where, later, we all went together, nestled somewhere back away from the lights of the seaside, tucked away in the spreading streets of the old parts of this pre-Roman town, hidden to all but those who live there.

How memory holds these experiences, almost complete in all the dimensions of the senses, held there somehow in the chemistry of the synapses, shimmering, deep somewhere in the vast dark light of the mind—unfathomable.

The square was strung with colored lights. A hum of anticipation in the twilight. An appetite for music and dance was clearly growing as people began to flow into the square to eat together, energy building, chattering in that lilting flow of French. Families and friends split off one after another into one of the restaurants grouped around this warm center.  These restaurants seemed to have no distinct boundaries, flowing into each other, tables in alcoves and courtyards, most built in the same stone with deep, framed windows. We had somehow come upon a Spanish festival here in this southern French town. Cultures merged. There would be Spanish music, Spanish food, Spanish dancing.

Our new friends motioned us towards their favorite restaurant. The owner ushered us to a table in an alcove opening out onto the square. There was a kind of perfection in the spot, both intimate and part of the activity of the whole. Our hosts ordered a paella which would take some time to arrivenand a big bowl of Sangria with slices of the fresh fruits of the Mediterranean floating on the top. Our hearts and guts warmed quickly with the wine. Talk began to flow easily. With the strange candor of the French, our hosts gently pried out some of our most secret desires, unknown even to our friends whose eyes widened from time to time during as they listened to the answers the tellers barely knew themselves.

The paella arrived in a huge steaming iron pot somewhere into our second bowl of Sangria. The fish was fresh. There were langoustines from the sea, succulent, supremely delicious. We dipped big ladles from the pot into our bowls and devoured it with chunks pulled from loaves of warm bread.

Our friends told us the cook here was Spanish and had helped initiate this festival some years before on the day of some obscure holiday. He revelled in the fact that he could, for once, serve as much of his treasured paella as he could cook.

We ate and went to dance together in the crowd in the square. Then we ate some more. There was teasing about who would dance with Michel the longest and some complications of emotions in the gay, drunken whirl, but, somewhere in the early, early morning, we were all back at our friends’ apartment where bedding and mattresses were pulled from somewhere. We all fell down on them and slept the sleep of the dead.

The pictures deep in my mind of the next day were lost in some darkness, but I have been reminded that sometime late the next morning, heads still fuzzy, our new friends drove us to the Italian border, where, in those days, passports were checked and decisions made about who would be turned away. There was evidently a crowd of people waiting to cross the frontier into Italy with a large presence of the Carabinieri which I remember distinctly, with their tall leather boots and uptilting hats making them look like models of the idea of Mussolini fascism.

Our friends dropped us off with kisses on each cheek, pressing us close, and got back in their car and drove off, back towards Nice. We shouldered our packs and walked up along the road towards the frontier.

As we waited our turn to have our passports checked and to answer the questions, we talked with other young people on the scattered line. Just before we crossed over to Italy, a young man with the profile of a Greek statue and the tight curls of the head of a Greek hero approached us. He was curious about our little group of three and wondered where we were going. We said we thought we would go to Greece.

He told us his name was Ion. He had dual Greek and British citizenship and was headed for his annual summer trip to his mother’s hometown of Glyfada, a seaside town north of Athens. As we went through customs, we continued to chat.

On the other side,  a crowd of people were gathered, many looking road weary, dusty and tired. Some held signs saying they had been waiting days for a ride. There were young and old with various luggage and with thumbs extended. We sat with Ion by the side of the road, sharing food from our packs, assessing the situation.

He said that in August it was particularly difficult to hitch a ride since so many people were headed to Italy for vacation. It would be particularly hard to get a ride for three. He suggested we split into two couples and hitch independently to the town of Bari along the Italian coast where we could catch a ferry to Athens. From there he would take us to visit his family. We settled on a date and a time for a rendezvous at the ferry dock.

My heart was suddenly heavy with anxiety. It was clear from the language of their bodies that I would be alone with Michel for the first time in our friendship. I was afraid for my friend who would travel with a stranger, no matter how friendly and trustworthy. And then afraid for myself, travelling alone with Michel who clearly I could trust from experience to keep us safe but whose last boundary of intimacy I was very hesitant to cross. I feared both the crossing of it and the possible rejection of that crossing, all at once. I had assumed his attraction for my friend. But somehow we were now stuck with each other. I was stymied, face to face with something an hour earlier I had not even anticipated.

My friend and Ion walked down the road a bit. She stuck out her thumb while he sat back on the metal guardrail next to the road. I, too, put out my thumb, Michel behind me, both standing in our position just within their sight.

We were off to Greece.