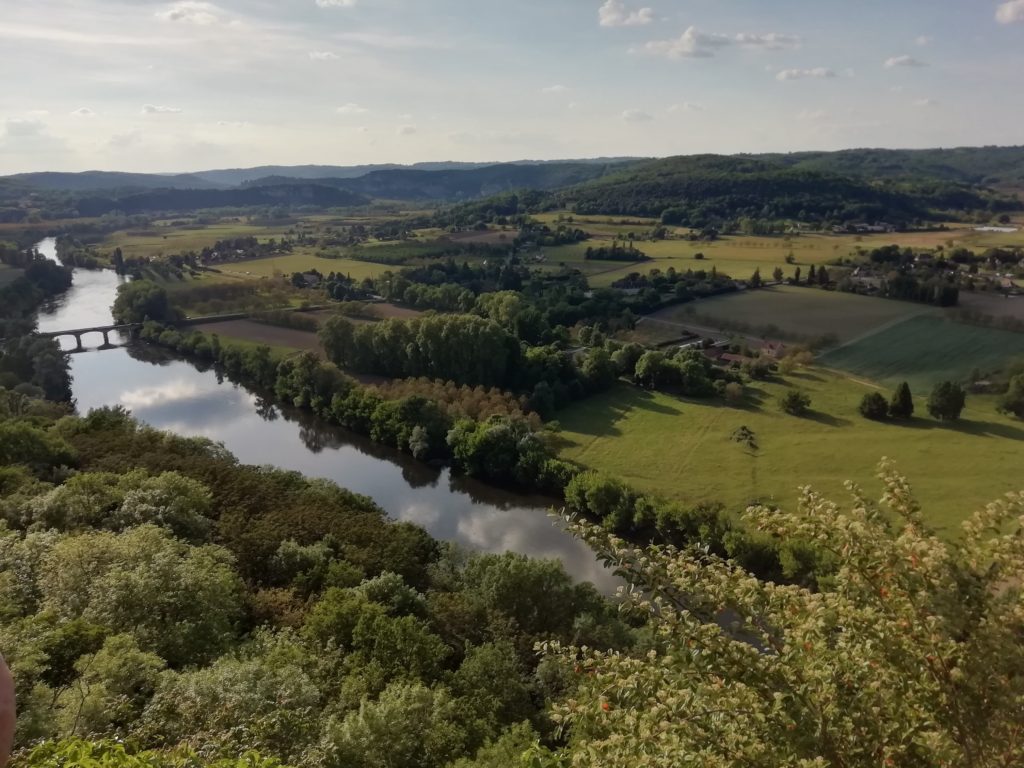 We are on our way to the Dordogne, the refuge of the Neandertal, the land of the caves where the ancient humans painted and carved on walls tens of thousands of years ago. The beautiful, rich valley of that big river, lined with limestone cliffs. On our way to finally see Lascaux (of course not the cave itself where we nearly destroyed the artwork of the ancestors before closing it off, but the elaborate replica, Lascaux Four, there at the base of the hill where the cave itself sits, closed to all but a few occasional scientists in moon suits). On our way to the valleys of the Dordogne and its tributary the Viesse, we stopped for a pique-nique in the city of Cahors.

We drove in the way we had come four summers ago when we were wandering the area, looking for a new home. We remembered the cafes by the river, away from the flow of the big old buildings of the city, and the trees that will flower later in July. We turned to the left to stay close to the river and settled on a spot with benches that looked over the water to the cliffs beyond, old houses with their clay tile roofs nestled at the base of the rock, next to the river.

It was just beside the road, but it didn’t really matter. There were trees, grass and rose bushes. We found a bench beside a fig tree, poured ourselves some wine, brought out the bread and cheese and olives, ate and watched the parade of humans, cars, buses and bicycles.

When we had almost eaten our fill and were pouring a second glass of wine, we each, in our own way, gradually became aware of a presence quite near us on the lawn. I had hesitated to turn and look, sensing it might be some semi-wild creature we would scare away. Walter had looked. He turned slightly and touched my leg. “See that woman? She has a parrot in the tree.” I turned squarely to see.

“Bonjour”, I said, suddenly unsure of the gender to the person who stood there, close to our bench, chopped brown hair under a nondescript cap, loose-jacketed, looking up at a big, brightly colored parrot in a fig tree beside us.

“Bonjour” replied the person, the voice either male or female, a bit rough. The parrot looked at me, cocked its head and squawked.

“Il est curieux de vous.” the person explained, glancing quickly at us and turning back to the bird.

A blank look passed quickly over the face turned towards me, incomprehension.  Something in the eyes, perhaps a directness in the brown-eyed glance, made me recognize this person was a woman.

Confused for a moment, I thought, no it can’t be a parakeet, it’s too big, then remembering some lesson I’d had with the French word for parrot, I said,

A small smile of pride, just a hint, appeared on her face as she calculated the length of time and then replied that he was thirty-four years old. I translated for Walter, who was picking up much of the meaning already. He said,

”I wonder how long parrots can live? That’s pretty old.”

I asked. She said with some confidence that they could live to be about fifty but most kept in a house lived to be about forty.

“I’ve had him since he was a few months old,” she told us, with an accent that seemed part of the air she had breathed since a child.

We talked for quite some time, learning that he like being outside and would not fly away, that he couldn’t say any words but imitated the bark of the neighbor’s little dog quite nicely, that he sometimes imitated a laugh from the television.  It was clear that this bird had been her closest companion for all those years. We learned somehow that she watched movies about the old days in France. In fact, she watched a lot of old movies on her TV at home. She had been born in a nearby village and lived in Cahors all of her adult life. There was much I wondered about her life but didn’t dare to ask, what she had done, had she been married, did she have children, what kind of home did she have.

We told her we were going to the caves at Lascaux, about a hundred kilometres north on the Dordogne River.  Her round, tanned face crinkled. She had heard of them, of their paintings, but had never been. It reminded her somehow of a movie she’d seen about men who wore plumes on their helmets. She had been to Toulouse with her father once or twice she remarked, hearing we lived further south, near the Pyrenees.

Our conversation could have stretched on and on. She was clearly content to have our interest. We could have become acquainted. But the road called us, the paintings in the caves, the river itself. We made our excuses. She motioned to Bertrand who sidled up the branch and jumped to her shoulder where she snapped a leash on a ring around his leg.

As we gathered our things she stood, watching, Bertrand squawking, impatient. She waved, unmoving, as we walked toward the road. “Au revoir!”

“Bonne journée!” I called back.

For those moments, walking away, I was filled unexpectedly with a certain kind of joy. Having seen through the window of her eyes some part of a life, some flicker of recognition beyond the filters of language and culture, I was stirred, happy to be able to communicate in my imperfect French. As we climbed into the somewhat battered car we’d bought a few months ago here in France, I looked forward eagerly to the next things we would experience on the road–together; the beauty of the cave paintings, the unknown stretches of a big river that had supported so much life for so long.

She, on the other hand, was probably returning slowly, by way of several familiar stops, to some small old house nearby, perhaps to chat for a while with a neighbor, then a meal in her kitchen and an evening to watch old movies with her parrot chattering in the background. Perhaps content. A good day. A recognition. Small things. 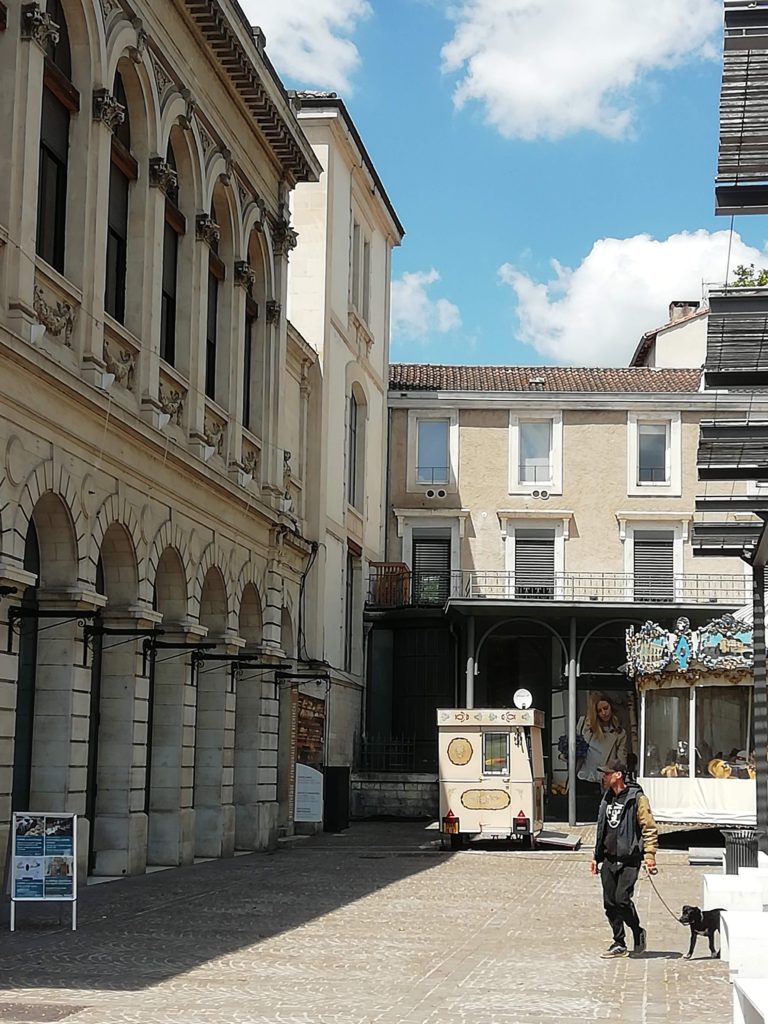 2 Replies to “In Cahors”