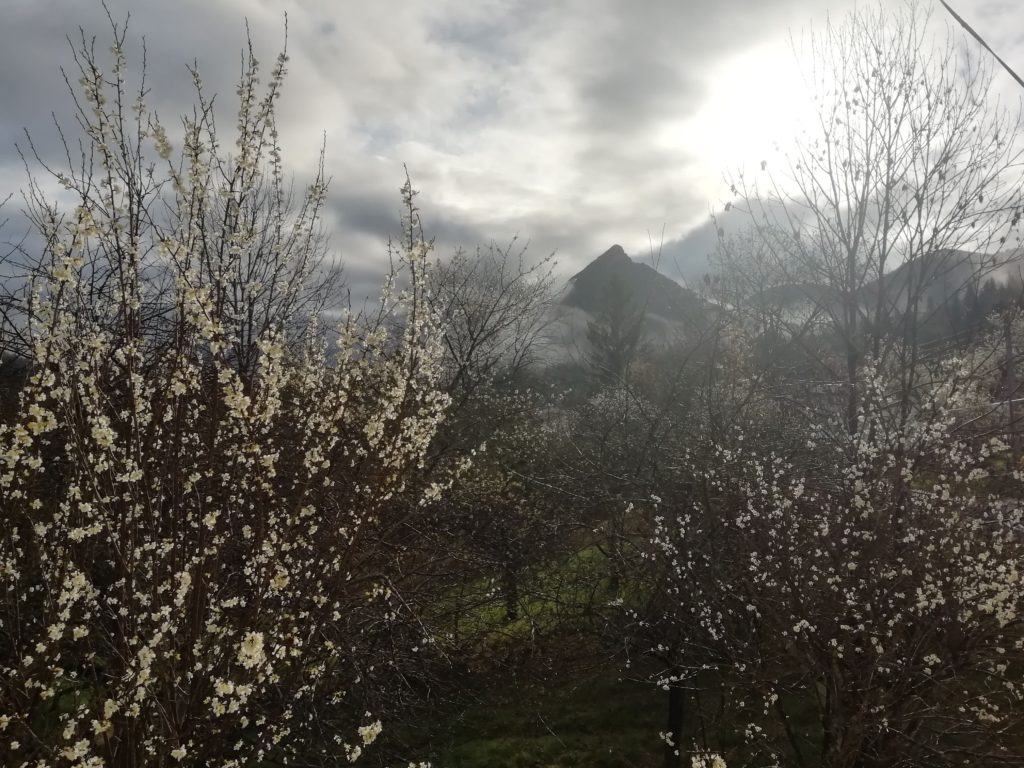 There is a time when the mist here floats on the hills behind the house in the morning. As dreams mingle with visions of what we call the solid world, as I move from sleep to what we call waking, there is less division on such mornings. One morning the mist may be violet, sitting as if it were the warm breath of the still-sleeping hill itself clinging to the silence. Another morning like this one, the mist seems to float yet is without movement. Obscuring yet filled with light as the still colorless sky becomes infused so very gradually with the warmth from the sun rising over the mountain to the east.

This morning when I was awake enough to tell my body to move and start the conscious day, I walked in my nightgown into our front room, a room lined with windows facing the road and a tiny kitchen space. As I passed by the windows on my way to the kettle, there was a flash of yellow at the corner of my eye. Two yellow-vested women seemed to be standing on the other side of our garden fence, in front of the row of rose bushes. Yellow vests. Signifiers of emotions and opinions which are not quite clear. A restlessness I cannot yet penetrate.

There’s a way in which the mood is turning, unwilling to continue along a disturbing path where the desires of the haves push the lives of the have-nots in ways they cannot control. As I went to set the water to boil for tea I wondered—was it this restlessness settling here in front of the house on the road into the village on a Sunday morning? Was it village workers responding to some emergency? The range of possibilities is as yet unclear to me, jumping into a new world of complexities woven over thousands of years.  The cues of a very different culture, cemented into my awareness since childhood,  can mislead.  And imagery of the yellow-vest is ambiguous even to the French that surround me.

Then another flash out of the corner of my eye–a runner coming down the road opposite ours, down from the trail through the woods and turning left in front of our house. Then another and another, all with leggings or shorts, little backpacks of different sizes and all holding some sort of collapsible walking sticks.

Ah, yes, a cross country race! It began to come into focus. The women with the vests were officials, guiding the runners. The logo on the yellow vests became clear–”Trail des Citadelles.” They were running from one high Cathar citadel to another. Walter, about to come naked into the front room, forewarned, put on some clothes, looked at the situation in the road and said, “We have to bring those women some coffee.”

Moments later, two cups of strong coffee in hand, we walked out together to the fence and offered them. Both women, seeing the cups, said “Oh! Oui! C’est si gentil!” We stood for a while talking with them over the little fence as they greeted runners with “Par la. Tenez a gauche.”That way. Stay to the left.)

In my faulty French, I ask questions about the race and the weather. They answer warmly and willingly. They had been coming to this very spot every Easter morning for the past eight years, through the shifting dates of Easter and through rain, cold, heat and even snow. They had seen the house empty for four years in a row and were now glad to see it alive again. Today was just right. Fresh, but not at all cold. A bit of rain and grey skies, but definitely spring.

Back under the eaves of the house, we pulled out a couple of chairs and watched, dry, through the light rain as families with children waited to see a husband or father, aunt or mother come down the road to take the bend around the corner. Some on the course had already been running for three or more hours and faced many more. As each one was sighted, their small groups of supporters clapped and cheered them on. Sometimes the father or mother stopped briefly to kiss each one in their little crowd on both cheeks before running on to cheers of “Allez! Allez!” from behind.

Each interaction that connects us to this place, this home, that allows us to penetrate just a little into the life of the people here is like waking into one reality from another, dream to dream. The man who, for instance, has a beautiful garden at the other end of the village, where the river winds past the old mill and past green patches and lilac bushes. This man who was eager, when asked, to tell us all about the work he does to make a beautiful vegetable garden with rows of hoop houses and beautifully mounded potatoes and how he protects his cherry trees and harvests them and how he cuts and stores up his wood.

Or the woman standing just outside her door at the turning before the bridge whose little dogs barked at me as I passed, who said “Beaucoup de bruit avec peu de cause.” ( Lots of noise with little cause.”) We both laughed in the amber light of a sunset descending over the mountains around us, both touched by it in ways beyond apprehension.

Or the old man carrying in a huge chunk of wood through his blue front door who said “Ah. Oui, mon poêle est vraiment grand,” (Yes, my stove is truly large) when I commented on how huge it was, there in his old strong arms. The woman who gave me a ride in her little car she pulled out of the garage when I knocked on her door and said, “J’ai tourné le genou pendant la randonnée. Ça fait mal. Vous pouvez me conduire à l’autre bout du village??” (I turned my knee while I was hiking. It hurts. Can you give me a life to the other end of the village?)  Concerned, she asked if I needed to go to the doctor. When I said it was not that bad, we chatted on the way about the house we’d bought whose previous owners were her friends of many years

Such beauty to be found. Here we are in the midst of it. Eyes open. Ears open. Nostrils flaring to smell the incredible blossoms of spring. Hearts listening, wondering, caught by the intensities of sunlight through parting clouds, sense of self dissipating like the mists over the hills, stirring and waking from dream into dream. So many other realities exist. This is one. 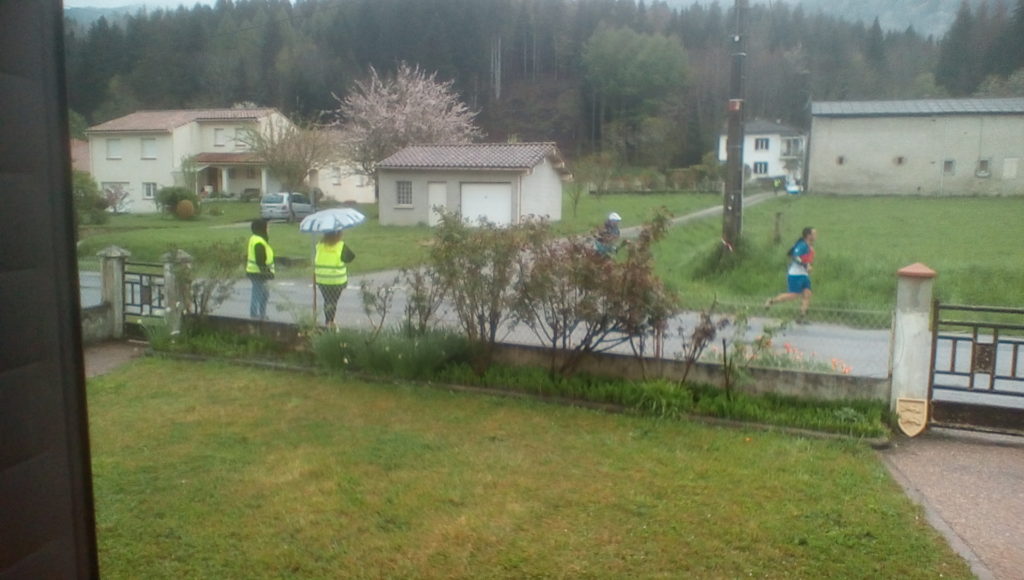