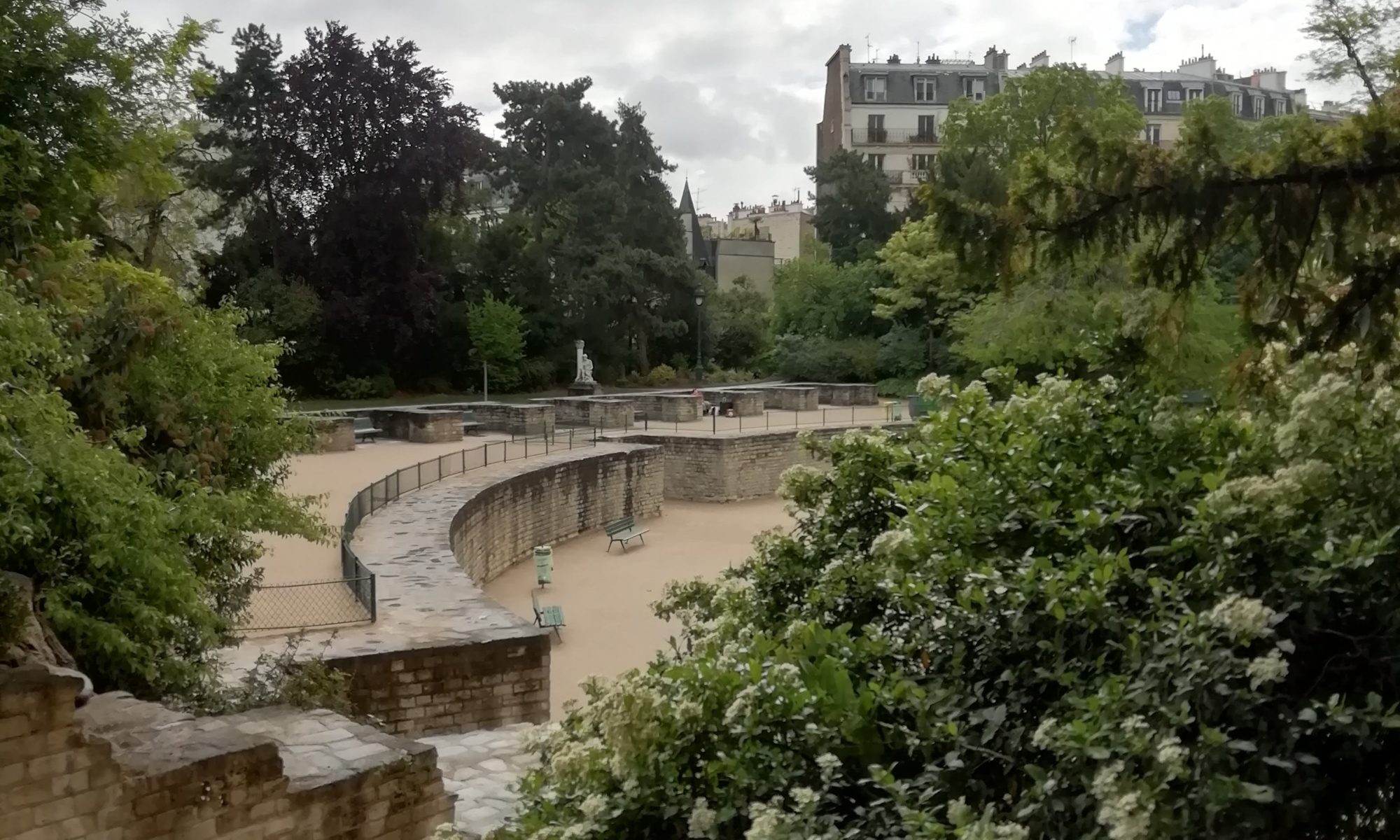 Paris.  A city.  A city with the ills of big cities. A city like all cities with a million individual worlds swirling around in its boundaries. A city with such flavor that the whole world holds it in the heart of its imaginings like some living treasure. 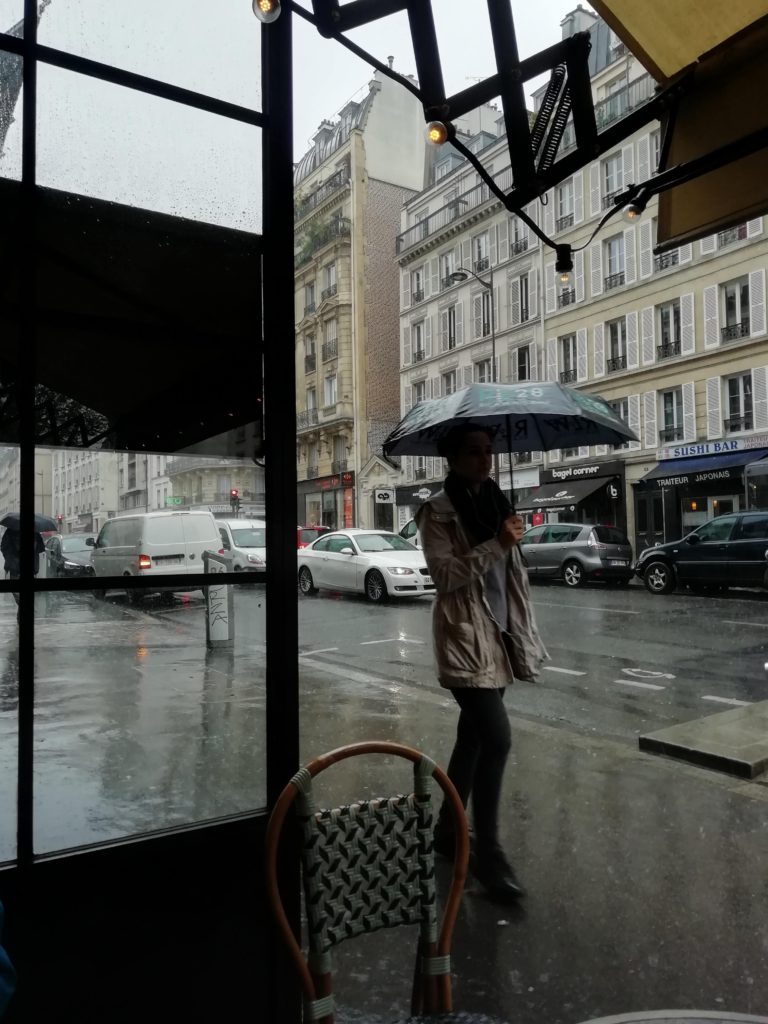 We went to Paris from our new home in the countryside of the Ariege in the foothills of the Pyrenees, from the fresh winds of the south to the stinking air of the Metros and wide streets filled with cars and buses spewing carbon monoxide. from the work in the garden and the planning for the work on the house to the city that is so richly imagined. Walter had never been. I had never been there with him, only told him stories of the Paris I had loved in its days after the student revolt.  We had just three nights in Paris.

We went to some of the usual places. We walked past the badly wounded Cathedral of Notre Dame where the smell of charred wood still lingers and tourists stand at the barriers clicking their tongues and discussing various theories they’ve read about the cause of the conflagration. 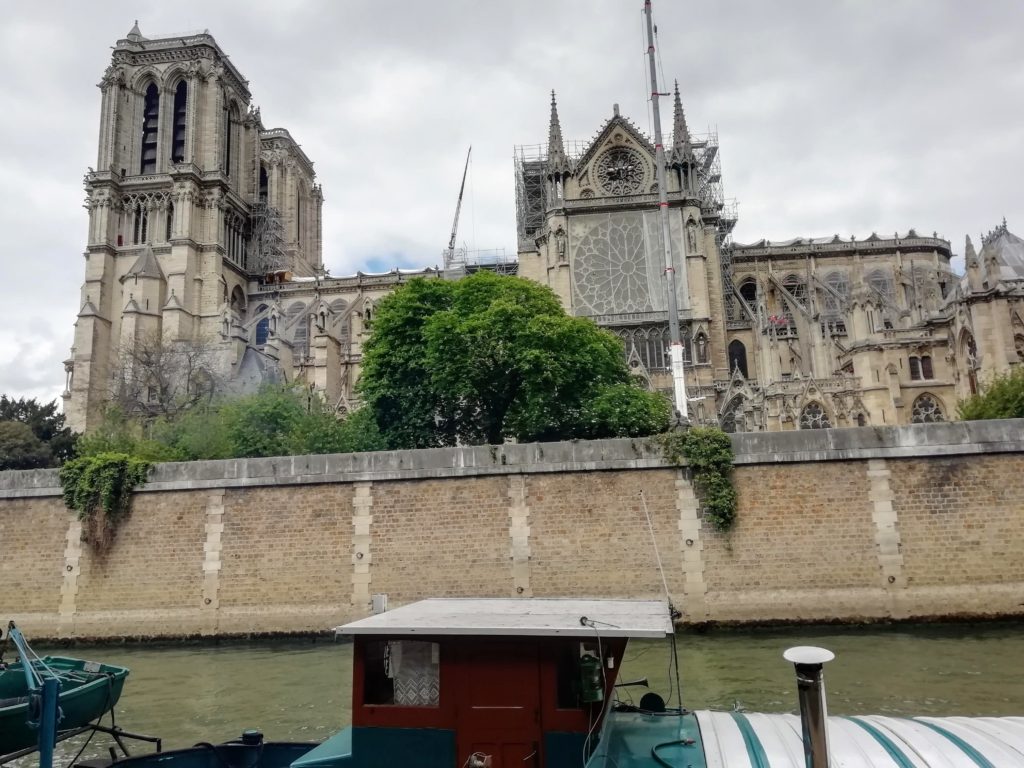 We spent a day wandering in the Louvre until our knees ached.

We wandered in the streets around the Sorbonne and the Pantheon in a thunderstorm and bought little music boxes in a wonderful toy store that we happened on in the downpour. We poked through the book stalls on the quays and browsed the books in front of Shakespeare and Co. We ate in bistros and sipped Armagnac in cafes while we made up stories about the people passing by. We walked under grey skies in the Jardins de Luxembourg and the Tuileries. We took the Metro to the Champs Elysee and bought a Paris umbrella to walk in the rain through rivers of water where the old cafes and the elegance are now lost to the visual noise of Mac Donald’s and Starbucks and arcades. We saw the Tour Eiffel looming as we went by the glamorous buildings of its neighborhood on the elevated tracks of the Metro. We spent hours in the Musee D’Orsay and the Orangerie. And I wandered in the neighborhood of Butte de Calle around our hotel, sampling the boulangeries, tabacs and epiceries while Walter rested—our usual routine. 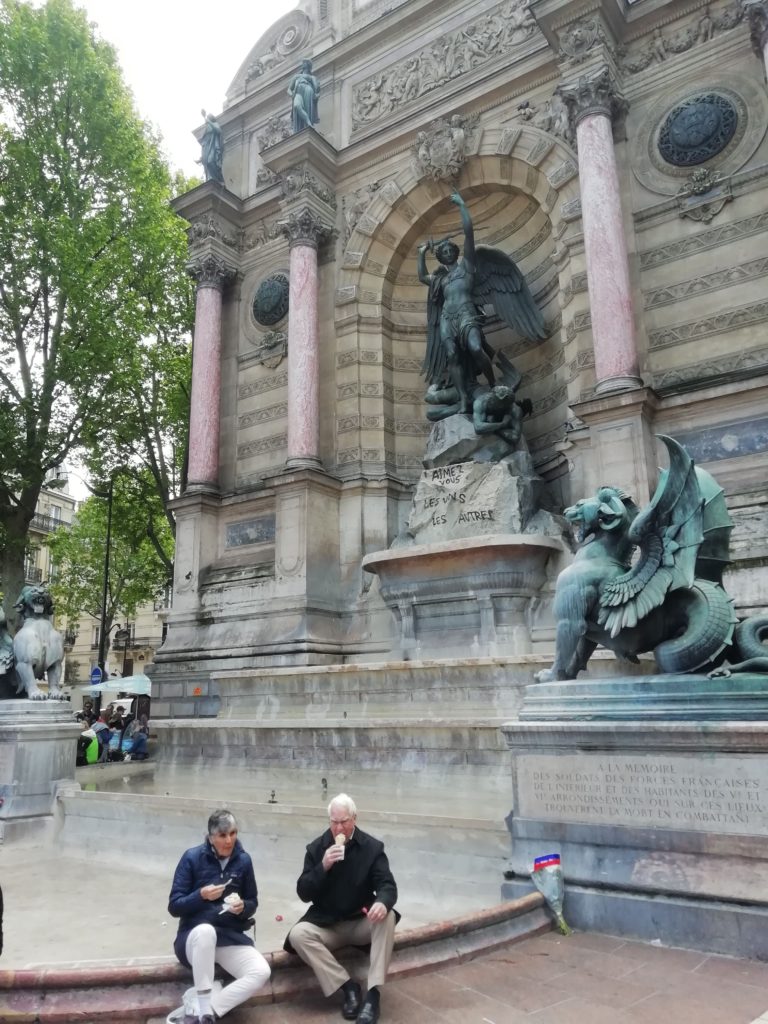 And there we were, our first day, wandering in the evening near the Boul’Mich to see what had changed, pausing at the intersection at the corner near the Musée de Cluny, idly reading the affiche about the history of the place. Curious about the little ruin I could see through a gate, I popped in to take a closer look while Walter read. There, surrounded by the higher walls around the Cluny, in an obscure little place with a temporary-seeming fence in front of the stone ruins of the Roman bath, the sound and smell of the traffic faded suddenly and trees grew. A man of some middle age with an impulse similar to mine had walked in behind me and had gone to stand at the fence a small distance away. As we stood there quietly, wondering about the piles of stones, a bird began to sing, hidden in the greenery above.

Listening for a moment to its clear notes, a song that seemed not to repeat, going here, going there, lilting pure, I realized it might be a nightingale, the bird I have been waiting to hear for so long, a bird not heard in America. Impulsively, excited, I turned to the stranger there in the enclosure just off the busy thoroughfare of Boulevard Saint Germain, this man with a round sympathetic face, greying hair, unfashionable glasses and said, “Vous croyez que c’est un rossignol qui chant comme ca?” He listened a moment, head tilting up, and said, a bit uncertainly, “Oui, je crois que oui! C’est pas sur mais quatre-vingt-dix pourcent.” He turned to me and smiled a small smile. “Ici,” I said, “au milieu de cette grande ville?” He paused as we listened to the song still sprinkling down from one of the trees over the ruin and, nodding, said, “Oui, c’est ca, Oui. Je pense que oui.” and smiled again his small smile, turning only partly toward me in his deference towards a stranger. We listened for another brief moment, each smiling but not to each other, until the song ended and the characteristic sound of a Paris police car in the distance blended in to the sounds of the traffic going by outside the wall. We looked at each other briefly, smiled down at the ground, wishing not to look too directly at such a moment of fleeting intimacy and, saying our Au revoir, he walked through the gate of the enclosure into the street in one direction and I in the other to rejoin Walter on the corner.

And then, our last evening in Paris, after a lovely romantic dinner near the Place D’Italie where we shared a bottle of red Corbieres from our neighboring region of the Aude and ate duck and perfectly cooked steak (a rarity in France), we were walking back to our hotel when we noticed a man filling a bottle at a big metal spigot in a chrome structure in the middle of a small square. In our village in the Ariege, there is such a place where, although the water is not monitored by the city, it is gathered in bottles by the locals in the same way- from a metal spigot in a stone basin under a sign stating Eau non-contrôlée. Coming down the hillside above it, spring water untreated and uncontaminated by livestock is preferred by the locals to the village water. Watching the man filling a bottle from a spigot set in a public place, it was hard to believe we were seeing a source of spring water here in the middle of Paris, here in a tiny park off the Rue Bobillot in the Place de Paul Verlaine two minutes walk from the big indoor mall at Place D’Italie. Looking at each other to confirm we were thinking the same thing, we walked towards the man still filling a bottle under the spigot.

He seemed neither young nor very old, bent there with his water bottle. Saying hello, stumbling over French vocabulary, I asked whether this water was actually potable. He was immediately animated as if waking from a dream to find us, and, saying, yes, it was good water, held out his bottle to offer us each a taste. We each drank, knowing the other had quickly considered and rejected the notion to decline a drink from a stranger’s bottle. It was good– fresh, cold and slightly sweet. He told us that yes, in fact, it was from a deep artesian well that had been drilled in the nineteenth century, still used by locals.

Reading about it later, I discovered the well is near the Bievre River, where it dumps its overflow in times of heavy rain. The river, still flowing into the Seine, was covered over a century ago and now was somewhere under our feet as we walked. In the lovely old yellow and orange brick building on the park marked Piscine, an old pool draws on the water from the well. The man leaned on a pole to talk with us, saying he had grown up in a nearby neighborhood with a French father and Japanese mother. He had lived abroad for years and worked in environmental engineering. Now had come back to his native Paris where he felt he belonged. We talked more about our farm in the States, our move to France, our shared interest in the environment and water. Each invigorated by the encounter, we said our goodbyes, exchanged compliments and went our ways. As we walked away to go back to our room for our last night, still a bit drunk on wine and happenstance, we talked about water, always so precious to humans, the element around which they gather, how it flows through our village just as it does through Paris, still seeping up in this neighborhood of Butte de Caille, fresh water now more rare than ever.

Here in France where the Neanderthal evolved and lived skilfully till gradually overpowered by the modern humans with their complexities of language, we have gathered around water, rivers and coasts, lakes, springs and streams. We learned long ago to build systems to distribute the water and irrigate crops. But the water that comes directly from the source is the most precious of all. There it is, flowing pure in the midst of the sewers and roads and endless buildings of Paris like the improbable song of the nightingale and the small smile of a stranger with a round face. How we may come to count on such quiet knowledge of the essentials of life, stored by communities against all odds. 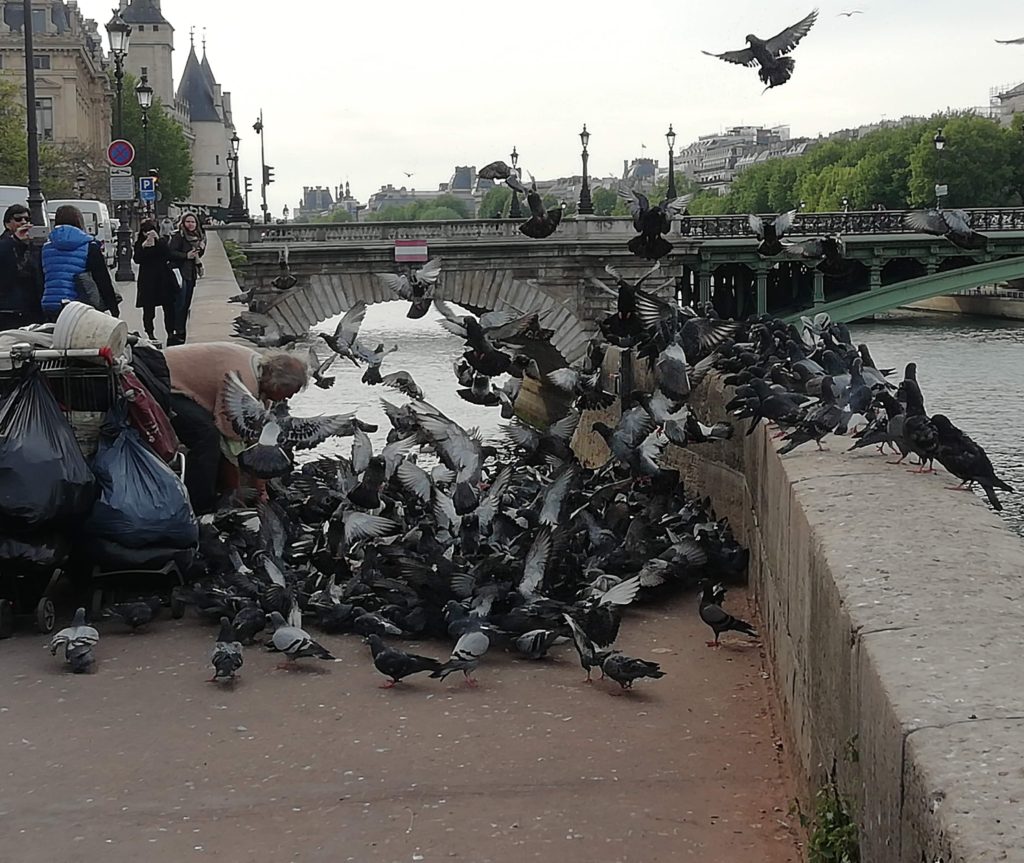