The light reflected from the Ria Mondega is illuminating the front of the train station across from where I sit in the dining room of our old hotel, having a meia de liete , a roll with cheese and linguica and yogurt. It promises to be one of the first truly hot days of summer. The sky is totally blue, unlike yesterday’s cloudy start.

This is our fifth real day in Portugal, not counting the first which was spent in the blur of travel. We’d landed in Porto and made our way to the guest house where the owner and his son met us at the door. With tremendous gentility and sweetness, they had welcomed us and let us get settled. Underestimating the level of our jet lag, we’d gone to have a light dinner in the neighborhood restaurant, where, at four o’clock, a tall, gaunt waiter had met us upstairs and informed us sadly that it was too early for the fish. Exhausted, more drained than hungry, we ended up having his “friends downstairs” pack our order of pork ribs and grilled chicken as take away.

Back in a lovely room in the north end of Porto, we fell onto the beds and slept, I,  waking a few hours later to gorge on the grilled chicken and then sleeping again. It was not only the day of travel hitting us, but the three weeks of non-stop work to clear the farmhouse of practically everything. My intervening three-day trip to see my son receive his PhD two thousand miles away from our former home was now a blur, his face and the swirl of so many contradictory emotions coming to me in dreams.

Porto began to show itself to us the next day as we walked in the late morning down the hills toward the River Douro. Still cool at the beginning of May, the sun came and went from behind the clouds, the weather perfect for walking around a town full of workers tearing down and rebuilding the insides of countless buildings, old houses lining every street with faces mute and blank, concealing the noises and the depth and breadth of life inside. 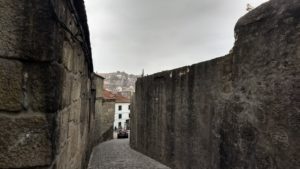 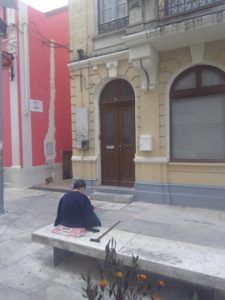 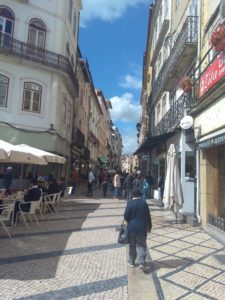 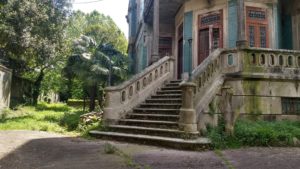 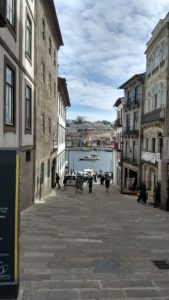 Grandfathers guided their toddler and preschool grandchildren through winding streets where the sidewalks were paved with thousands upon thousands of small rounded rocks in many patterns. Here too in Coimbra, all the sidewalks are the same—each street a different variety, color and pattern of stone. Some complain that these traditional streets collect garbage  between the stones and are therefore unhygienic. However, I have not seen as much dog shit here as in Paris or even as on any one of the urban trails back home in Bellingham, WA.

As I walk, I imagine the workers on hands and knees, placing stones, chatting non-stop and laughing to the accompaniment of the clang of their tools pounding the stones into the gravel, working their way along beside the hundreds of doors that lead into the caverns of lovely, unseen homes inside.

But there is a mystery in these cities of Portugal. It is now evening, and we have rested and gone up the hill in Coimbra to the famed Botanical Gardens. Originally started by the university in 1772 as a place to experiment with rare species and teach the medical students about medicinal plants. it is now run down an neglected, much of it closed to the public. Fountains that must have been lovely oases in the lush greenery do not flow. Ponds with goldfish are filled with algae where teenagers cavort and try to feed the fish Oreo cookies, perhaps with felonious intent. Everything is overgrown with weeds. The stones of stairs and tables are broken and lying in pieces. The blue tiles on the sides of the seating areas are cracked and falling from the wall. Exotic trees are dead and brown or dying. The greenhouse is closed to the public and looks as if very few professionals visit to care for the browning plants inside. The whole place has a miasma of neglect. Strangely, there is a modern bathroom near the greenhouse and a couple of workers using leaf blowers and a pick in a desultory effort to clear away a few small weeds and sparse fallen leaves on the verges around the greenhouse, as if in an attempt to deny the wild growth spreading everywhere. 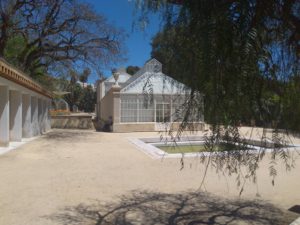 In the overgrown bamboo forest, two workers are inexplicably in the process of constructing a traditional stone pathway through the bamboo, while the poles of bamboo encroach on the ancient buildings and choke the ponds and fountains. The hammer on the stones makes the same sound I imagined the workers had made while laying the stone sidewalks of Porto. Accompanying the ringing taps of the hammer, unfamiliar birds sing in this wildness while domestic apple and pear trees, somehow pruned during the winter, are suffering from lack of water and nutrients in the soils, weeds taking firm hold on the terraces where the fruit trees seem to be making their own lonely effort to survive. 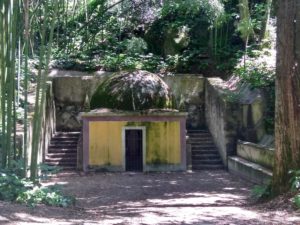 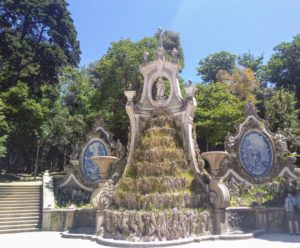 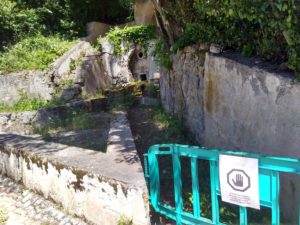 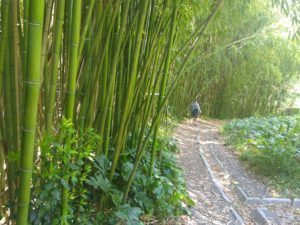 Internet research on the reasons for this neglect seems useless. Everywhere in the two cities we’ve visited so far the stones of monuments and beautiful old buildings are blackened and full of moss. But there is construction everywhere, private renovation of ancient buildings for apartments, new stores going in on old streets, facelifts on crumbling buildings with wrought iron balustrades. But none of it seems to be municipal work. It is clear that the economy of Portugal suffered a heavy blow in 2010 and 2011 after the crash and with the European Union’s instigation of austerity measures here and in Greece, but all indications are that the recent trends are upwards.

Fundamentals appear to be fairly strong. The Centrist Left Wing government is stable and continues to have high approval ratings. In 2012 they began pushing back against austerity and seem to be managing well. The people are working and seem fairly upbeat, despite the perceptions of some other travellers I’ve read that the Portuguese are depressed and rude.

What is the source of all the neglect? I asked the night manager at our hotel if he could tell me why so much of the Botanical Gardens are closed. He replied that the gardens are owned and run by the university as a research area and those areas that are closed to the public are typically areas where experiments are underway and should not be disturbed by tourists. I thought to myself that the research, in this case, must be into the effects of benign neglect on non-native plants. I suppose there might be a Secret Garden grant from the government for such study.

The reason for the take over by weeds and the unchecked effects of water, wind and corrosion there and in the nearby municipal gardens still eludes me. Perhaps the priorities of this socialist government are rightly placed on the care of its people rather than on its municipal parks and monuments. There are also many wild preserves in the countryside and mountains of Portugal. Maybe these (and the cafes and bars) are the refuges of the populace.

Meanwhile, still puzzled, sitting here under an umbrella at a table of the Cafe Santa Cruz in the late afternoon sun, I will enjoy the Fado of Coimbra, which seems to be more chauvinistic and folkloric than the Fado of passionate longing sung in Lisbon. I will sit and feel the sun mixed with the breezes from the Rua Mondango while bats begin to fly overhead in the open plaza around the ancient church where the light is golden for a few more moments. 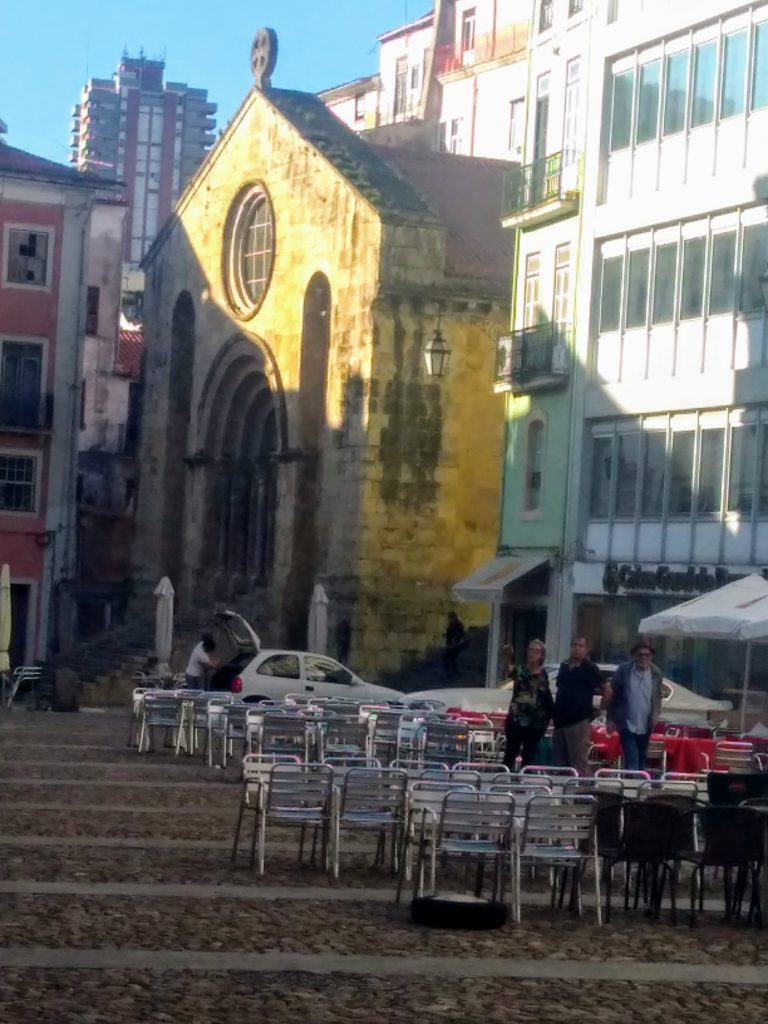