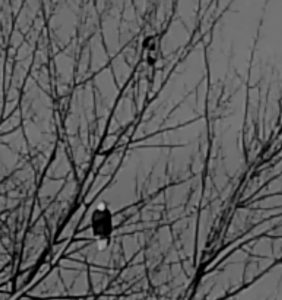 An eagle came to perch on the upper branches of the cottonwood tree on the farm that would soon no longer be our home. It was a magnificent bird, mature, head strong and white as white. It was watching, head turned towards the house as we sat in our bare dining room on the only chairs left in the house, looking out on our penultimate evening to the barn where the setting sun had once again turned the fir planks a soft lavender. Our purple barn. As I went out across the yard to get one of the last boxes from the barn’s huge dim interior, the huge eagle, still in the cottonwood, called its screeching call, piercing notes echoing slightly in the cooling air.

We worked steadily from early the next morning till late that next night, emptying the last things from the house, and then the last things after that, hauling them to the small storage space or the dump. Then cleaning the house. The weeds in the garden wanted to be pulled, but I passed them by as I walked to the mailbox, ignoring their cries. The rose bushes wanted to be pruned of their winter damage and those that climbed, tied again against their supports, but I told them they would have to wait for someone else to guide them.

Exhausted, working till the last minute, we drove away down the road to our friends’ lavender farm a half mile away. We pulled up the drive behind the lavender fields to the little trailer the sister had parked next to her rescue cows and hauled our last boxes and bags into the tiny space to sort during the next twenty-four hours. Our friends down the road had invited us all for dinner and, after a quick rest in our little haven, we drove there to sit in the garden and watch the evening spread over the white volcano in the distance. On the way back to the trailer after dinner, we passed our usual turn to the farm—home. It hit me unexpectedly–right in the chest. “We’re never going home to our bed.” I tried to choke back the tears but they came of their own volition, hard, breathless. “I knew this was coming,” I said. “I knew it would hit me at some point. I just didn’t know when.”

In our bed in the little trailer after an exhausted short sleep, I awoke to swirling fears, a seemingly endless expanse of dark possibilities, ruin, homelessness. I pulled the thoughts in. I made them hush themselves in the darkness and I went deeply into my heart and the heart of that huge expanse. I went deeper and deeper, wider and wider into the silence.

By the time the first birds began to chirp, the ones that see the light with some inner eye before the sun’s rays begin to penetrate, I was ready to fall into sleep. “You’ve done the work. Now rest.” I slept and dreamed and woke up to the soft sounds of cows munching grass and geese calling as they flew towards the fields beyond, I calmly joyous, ready to laugh.

And here we are on a plane flying over Manitoba, lakes and square fields patterned on a tapestry rug below. I’m thinking how I woke this morning for the second time, after getting up in the night to attend to all the last minute things I hadn’t been able to do, to the chattering cries of another eagle, unseen, somewhere to the morning side of the little trailer. A joyous rousing. A call to come and take part in this marvellous moment. So I did. And made coffee. And smiled at Walter who was turning over to sleep just a little while longer.

And as our friend drove across the border to Canada and up the highway in British Columbia on our way to the airport, two more eagles, one soon, one later, flew across our path and north, their white heads shining. “Come,” they seemed to say, “This way. Come.”