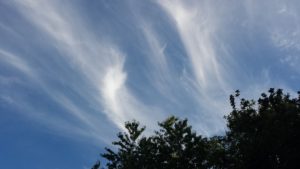 They were cutting the big hay fields up at the top of the hill, old Wayne Larson’s fields.

Our friends with the lavender farm next to the fields called us to ask to see if we might be able to identify the huge hawks that were circling around over the fields and the farm. One had even chased aside a bald eagle. From the description, we weren’t sure.

I’d been meaning to take a walk, so after finishing the small bit of planting I was doing, I headed up the hill.

It was a beautiful afternoon after a chilly, greyish morning. The sky was perfectly blue. The wind had died down to a breezy level. The air was finally really warming to the return of the sun. The robins were repeating their simple songs back and forth to each other across the road.

Before I could even see the fields, I saw the raptors soaring around in that celestial space. As I approached the farm, I could see several bald eagles drifting around, some close to the ground, others up above the big Doug Firs at the edge of the field. Then the hawks, large bodied, some bigger than the eagles, two flying in patterns around each other, others scattered through the air. I was already soaring with them.

As I walked up the side road around the back of the farmhouse, I saw my friend weeding in the raised beds. It took her a few moments to notice I was approaching, then, taking off her headphones, she pointed up to one of the hawks flying over the big fir at the back of their yard. We watched it careen out over the field, joining dozens of other birds soaring, swooping and perching in the tallest trees on the far side of the big field.

We spent the next hour totally captivated by the show. The others had come out of the house. My friend the photographer had been trying to get some good shots of the birds as they flew past. Now he, too, sat and watched. There were at least a dozen bald eagles coming from all directions and dozens of other raptors. I spotted a pair or two of graceful harriers. Others were clearly red-tailed hawks of different sizes, some with gold on their bodies, some dark, some with truly coppery tails Some seemed so heavy and big I thought must be Cooper’s Hawks, but the coloring seemed wrong.

Absorbed in trying to see the details of their markings and the shape of head and wing, we all began to feel the exhilaration of the air.

I’d seen great gatherings of raptors before, once along a river near La Center, another along a field in Sumas, but never so close and with such intimacy. Our stories of birds and flight came one on top of the other. I somehow had a glass of wine in my hand and the joy of friendship and the lift of the thermal air currents was palpable. We were becoming as close to the birds of the air in spirit as was possible.

We watched while some dark hawk flew by with a mouse in his beak. He changed direction quickly as an eagle swooped towards him. The eagle made a grab for the morsel and missed. The owner of the prize swooped up into the air and back the way he had been headed, maybe to feed a brood.

Eagles vied for the highest perch in the trees, calling in their seaside screeches. The vibrancy of the whole scene lifted us. As the big hay mowers moved into the next field, the rodents must have had enough time to run for cover in the field closest to us. The show moved to the field to the east, though birds still hovered and pounced periodically close to our view.

Here and there, a harrier or a red-tail rode a draft above us, silent, motionless, absorbed in the repose of the air. One pair of harriers did a quick pas de deux as they moved back and forth from one field to the next.

As the mowing machines moved further away and the activity began to subside, my friend went back to her weeding and her husband went down the access road to pursue another photo or two. I hugged his sister and we said our good-byes, knowing the mood would unfold into the evening.

As I resumed my walk, I thought to give my mother her Sunday call on my cell phone. As she said hello, I could hear a note of depression in her voice. She was in the throes of watching the evening news there on the east coast. When I asked how she was doing, she began a litany of all the national idiocies perpetrated during the course of that single weekend day. I said, “Forget that! We know enough about all about that! Let me tell you what I’ve just been doing. It will definitely change the mood!.”

That night I slept peacefully, dreaming here and there of birds and air. When I woke up early in the morning, pursued by some motion in a dream, I saw the swollen, upside down half moon through openings in the blind. I got up to see it through the window, and then padded out, naked and barefoot, to see it in the naked night.

It was shining golden in the southwestern sky. I have never seen the moon shine with such a yellow gold, lemony and glowing with a kind of penumbra blending hazily into the night sky around it.

Another celebration of the air.

One Reply to “The Element of Air”