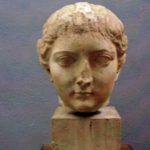 My granddaughter was visiting.

We were having a terrific time together on the farm. We’d spent the evening having a wonderful family dinner, our first outdoors for the season. Her father had cooked course after delicious course on the grill. We had lingered and lingered all together, talking, playing.

We were having a terrific time together on the farm. We’d spent the evening having a wonderful family dinner, our first outdoors for the season. Her father had cooked course after delicious course on the grill. We had lingered and lingered all together, talking, playing.

The next morning, she watched grandpa plant seedlings and talked to the horses over the fence. We watched the many kinds of bees in the raspberry flowers and in the yellow kale flowers, learning that bees are so busy that they won’t bother you at all unless you squeeze them in your hand. We learned how to tell the difference between bees and more aggressive yellow jackets which you just need to give wide berth.

We counted the big orange poppies that had bloomed and found that three more had bloomed since we’d last looked the afternoon before, performing addition in the process. Her parents were trying to get some much-needed rest.

The trouble started when her mother and I decided to go for a walk and take her along. When she realized what was really afoot, not a walk to the playground or to a friend’s but just a walk, she wasn’t having it. There were tears and wailing that grew in intensity, uncharacteristic.

Her mom and dad tried to figure out whether she was sick, hungry or just worn out. We tried to wait it out. We gave her a choice to come or stay with her dad. Her mom told her she could see she was upset and angry. It was one of those moments with kids.

The day was taking an unfortunate turn. Choices for grownups. To give in, to compromise, or to just let everyone be unhappy with things for awhile. To salvage things, we decided to take her instead on an errand to buy some eggs from our neighbor a few miles away. Distraction. No one wins. No one loses.

While her mom gathered things up, I put my three-and-a-half-year-old granddaughter in her car seat in the back of my car. When she was buckled up and calming down, I said,

“So what were all those tears and screaming about? I know you were mad, but we were just trying to have a nice time together. We were beginning to think you were sick. “

“I don’t know,” she replied, uncertain whether she would continue to sulk.

“Life is about give and take. “ I said,  settling into my “wise grandma” role.

“Sometimes you do something you don’t really want to in order to make other people happy. Then that helps them feel good about doing things you want to do. So why all the fuss?”

She thought for a few seconds, the sulking face having passed like a small grey cloud on our sunny day.

“Tell me more about that.”

“Well what makes it easier? If you use words, people know what’s going on.”

“Yeah. Like at school. If I cry, then the teacher stops what’s she’s doing. If I talk, then she doesn’t do anything. Just talk.”

“Hmm. Tell me about a time when that happened.”

She thought again. “Boys were doing mean things to me and my friend. If we cry, then the teacher comes and tells the boys to stop.”

I’ve taught people for years how to be proficient in getting their needs met. I’ve learned that much of what I’ve taught only works some small part of the time.

What she had just taught me is how we learn to do this—to just let our emotions rip. That she could see that it was the easier path–that was brilliant. Nature finds the path of least resistence.

I certainly don’t think I could observe myself that way at age three. That it is a learned thing, reinforced by the reaction other people have to the emotional outburst–that I got. But that it was the easier thing to do… Even now I hadn’t yet articulated that to myself.

With lots of good teachers in life and lots of practice, I’m better able to stand back and observe my emotions (with some very notable exceptions) and make a choice about what to do. Next time I observe a big emotion welling up, I hope I’ll think about what she said.

The easy way is to just cry and yell. It gets the other person to really pay attention and react faster. Then, as you develop, you get to wondering.

Exactly what reaction will that be? Will it get me what I really need later today, tomorrow and into the great future?

This thing we’re involved in all together is about give and take.

First is the giving up of the satisfaction of the moment for the sake of the future moments you will live through.

Then is the giving up of what may return to you for the sake of the natural beneficence of the moment, and nothing more.

If I, as her grandmother, can help her learn about give and take, she will probably have the wisdom by the time she’s my age to travel beyond and become the creator of her own happiness. 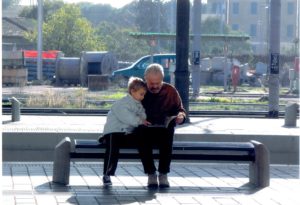 One Reply to “The Lesson”