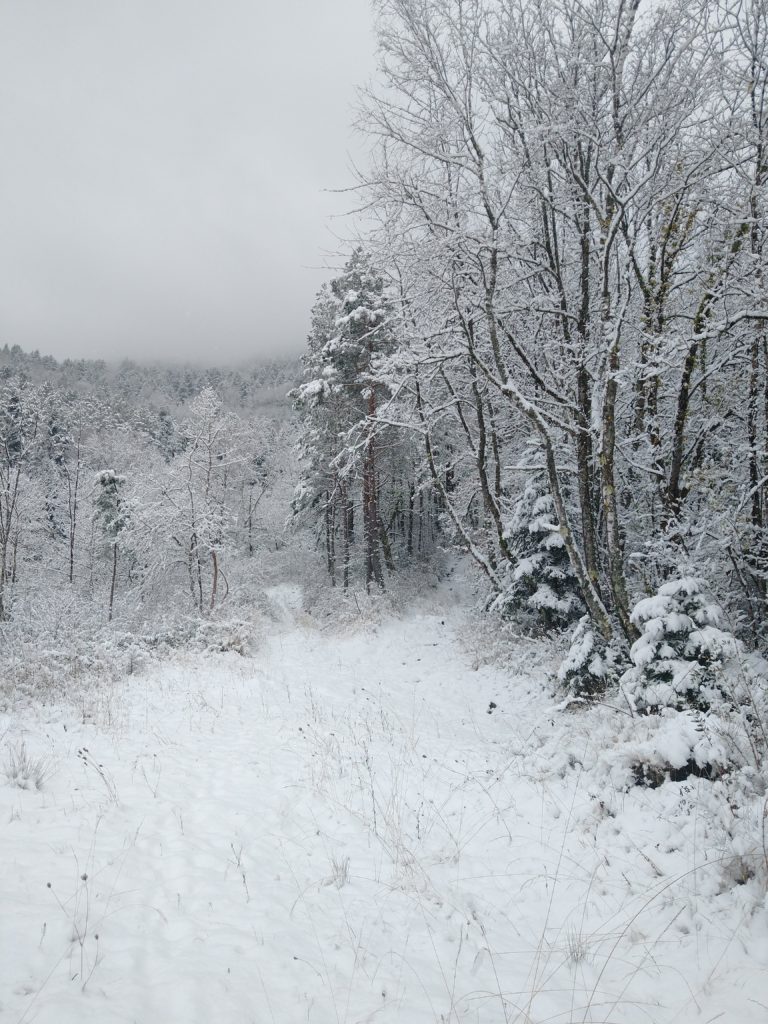 It’s windy, wet and cold and for the first time since we’ve moved here to this village, for several days I had no urge to go out to the forest to walk. Yesterday I had the same feeling of disquiet and lassitude. Yesterday, I indulged the mood as a grace period for New Year’s Day. Today it just feels like giving up.

But the day before yesterday, the day of New Year’s Eve,  I began by saying I’d take a short walk and ended by climbing up the hill to the path that leads up to Montségur. I only went up to the top of the hill, a good pull, just up to where it levels off before it begins the real climb.

The sky was grey, the light flat, but the smell and feel of the deep layer of oak and beech leaves under my boots still filled me. The trees along the way, some with roots growing out of the old stone walls, still spoke to me. On the way down, the view of the orange-tiled roofs of the village against the snow-dusted hills made me stop in my careful descent over the muddy, slidey track, to breathe in the feeling of living here in a place where our species has been rooted for so long.  Today I am just disgruntled and, though I want to sit and read, nothing really eases my spirit except writing.

Most of the people of the village have closed their shutters and lit their wood stoves. Unlike the old days, many are watching their télé or are planted in front of their computers.  I will leave the shutters open like the American that I am. I want to see what’s happening out there. I want to see the light, even the dim, grey light. I don’t care who sees me as they drive by. I don’t even care if the woman who is “the-repository-of-all-village-knowledge” (for whom I have real fondness) peers up to try to find me through the second story window where I sit typing and glancing at the road. She can tell I’m up here through that keen sense we all have when eyes are focused in our direction–a sense of something furtively flickering deep inside our head. I turn away to release the magnetism and go back to my typing.

And then, today, the sun came out, its brightness felt only for a couple of hours around mid-day. As it was beginning its descent down towards the mountains, I made myself set off for a walk up the hill into the forest, deciding to wander as far as I wanted. I had to get back to the trees. 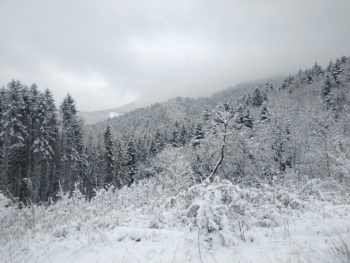 I reached my sitting spot as the light was pulling away into the further valleys. Crystals of icy snow stuck to moss here and there. The light here, deep in the forest, was at an exquisite tipping point, grey, flat as if one was breathing ether through one’s eyes.

There is no breeze. The earth slopes dramatically down away from me, the trees riding it like the trough of a great wave. I let myself be carried by its silent, still motion. The force of it is cleansing, like the great pull of the ocean. Everywhere I look, I am moved to stillness–by the brown of the layers of wet leaves, by the brilliant green of the moss shining in the dimness, by the flecks of crystalline snow delicately riding on top of the moss’s fuzzy miniature forests growing on part of fallen trees, the patterns of the bark on these vertical beings that have ranged themselves all up and down the slopes of earth, breaking apart rocks, turning them, as they stretch out their roots with such patience, into the very earth that feeds them.

When I finally get up from the rock, feeling the cold as the air abruptly chills with the draining away of the sun’s rays from the last east-facing hillside, the silence, the presence of the trees and the soil and the moss has become me, replacing all thought, all noise. 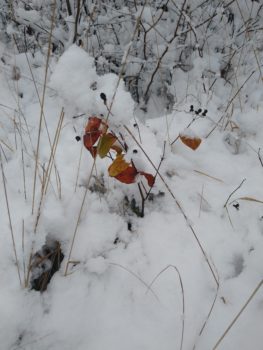 It is now the next day. The silence of yesterday is still with me. With snow starting in the night and falling through the morning, I have climbed up to see the woods decked in all that glorious whiteness. With the big stick I had found in the spring to help me over the slick rocks and have kept hidden in a spot under some brambles to wait for my frequent return, I am making my way down along the muddy and snow-covered track. Breathing in the silvery, dim light, I alternately watch my feet as they place themselves on ground where they won’t slip and look up to observe all the exquisite detail of limbs and bark, lichen, dark and red leaves here and there clinging to bare twigs.

Suddenly– a large bird, barely perched on a branch piled delicately with snow, barely displacing any of the crystals held together by their mutual cold.  And suddenly, I recognise it as a hawk. Without thought, I know it by its size, the upward sweeping of its wings as it lifts,  somehow remaining still.  But now, for some incredibly small instant, there is a flash the color of the sun at the base of a wing,  a flash of an orangey-bronze patch under a strong uplifting feathered limb. a sudden revelation of hidden beauty as stillness and movement are somehow combined. Deciding that my presence disrupts the flow of his life’s movement, he is flying in a trajectory through the trees, up and over, gone.

My whole being vibrates in response, tasting this moment, absorbing it like the nourishment that runs in the blood, like the air that seeps into the lungs and is drawn up by all the cells and moved out by the lungs once again, a different substance. Filling to emptying, emptiness to fullness. That brief moment had become the whole universe inside me, rising up and out forever. 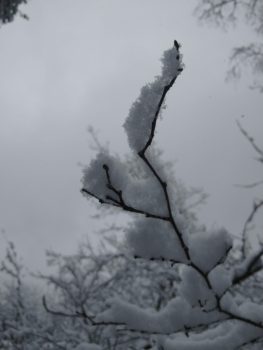